As I mentioned in my initial post, while I was growing up Jeff Bagwell was my hero. I remember mimicking his unorthodox stance in my backyard. According to the wonderful Trading Card Database, I have 767 different Bagwell cards out of a possible 5889, or about thirteen percent. That 5889 includes some ridiculous 1/1 items, though, and things like printing plates. Ah well. Someday, when I’ve got all the money, right?

As an exercise in walking back through my collection, I thought I’d try selecting my favorite card from each year. (Yes, all of my cards of Jeff are sorted chronologically and then alphabetically by brand – how else would one keep track of them?)

Ah, the minor leagues. There are several cards from 1990 featuring Jeff in his New Britain Red Sox uniform, including base sets from Best, ProCards and Star, as well as team sets from Best and Star and a couple All-Star/Top Prospect sets from ProCards. The base Best card is by far my favorite, however. It’s just a classic old school portrait, shot in good old golden hour lighting, and you can see just a tuft of Jeff’s mullet peeking out. None of the other cards have near this amount of class.

P.S. If you’re wondering, I still need the CMC card and an unsigned copy of the ProCards Eastern League All-Stars.

It appears that I’m missing several more of the 1991 cards than I’d previously thought. This nice defensive shot was one of my first cards of Jeff, and was probably the first card I ever got signed. I’m sure that’ll show up on this blog eventually.

After winning the Rookie of the Year award in 1991, the abundance of Bagwell cards grew exponentially the following year. There are an awful lot to like, too. His Score base card and Upper Deck Homerun Heroes insert have some great swings, and there are some nice art cards. But something about this Classic shot just shows off his swing so nicely. I mean, you know he hit the crap out of that ball. 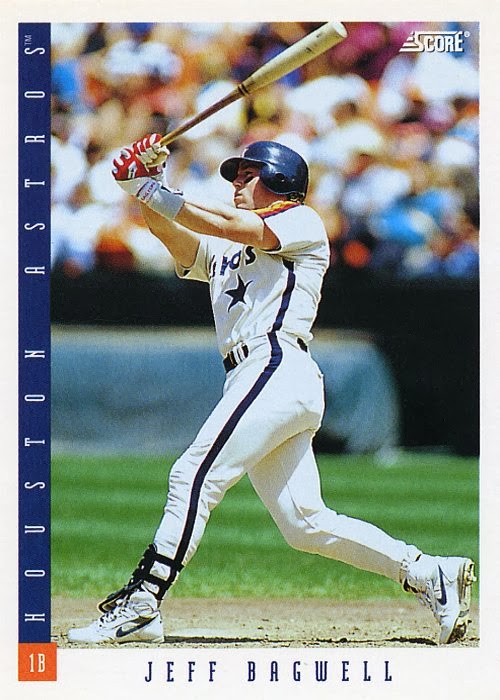 And again, here’s another gorgeous cut. I love the high extended bat, and the navy side stripe of the old Astros uniforms adds a nice touch. The Upper Deck Iooss Collection card from ’93 is really nice as well. I feel like ’93 Score is a really underrated set. I’ll save that for another post though. 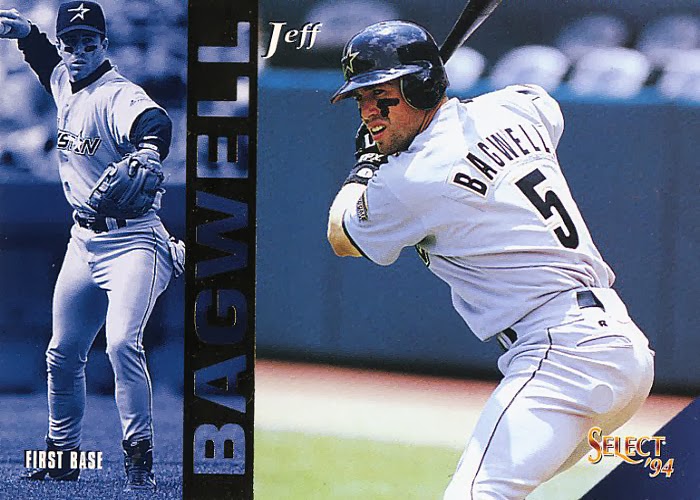 The gold foil banner that divides this card doesn’t scan well, but I think Score nailed it with their Select set in 1994. Granted, not all the cards look quite this nice, but Bagwell’s is a fine example of a horizontal card done right. 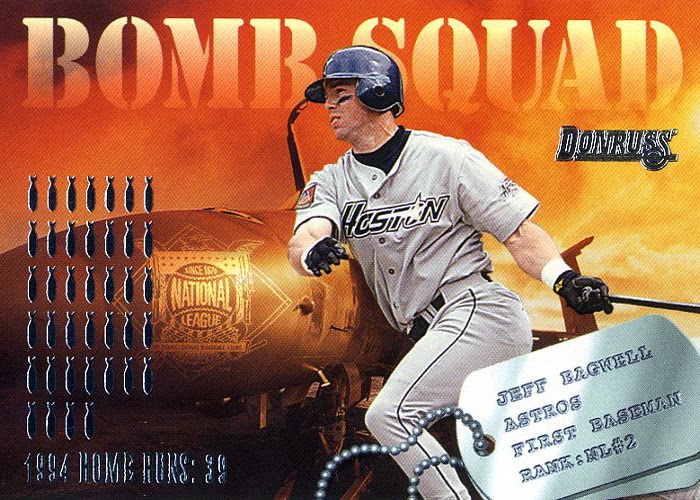 Yes, there are about a zillion cards of Jeff in 1995, due to the expanding number of sets and his 1994 MVP. So yes, I had to pick two. I dare you to find a cooler looking cards than these. All those bombs are foil-stamped. Plus, Jeff finally made the front of a two-sided insert, something I feel Astros didn’t get very much. Frank Thomas got stuck on the back of that beauty. As for the Leaf Slideshow (still need 5B by the way) – I mean, you can look through it! 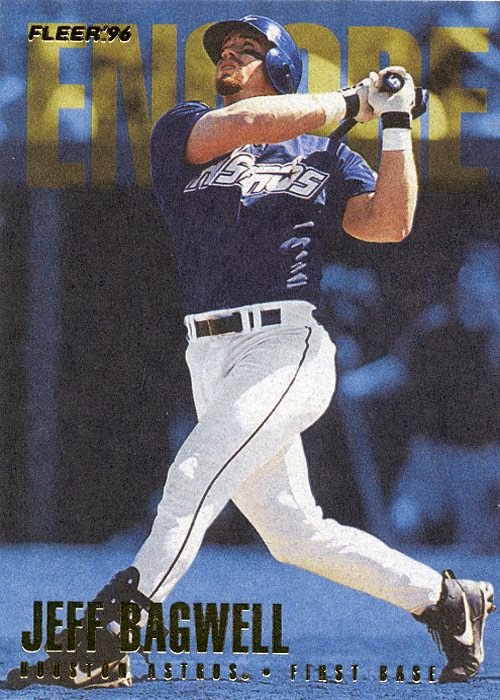 I love the ’96 Bowman’s Best gold card, and it was hard not to pick the Leaf Preferred Steel, or Upper Deck SP, or the SPx Hologram. But something about the simplicity of ’96 Fleer and it’s update series just grab me. I liked the return to a non-glossy card (great for autographs!) and again, it’s a sweet Bagwell swing.

This is another set that just grabs me for some reason. I’m not sure how other hobbyists feel about it, but I dig it. I feel like the photographs were nice and bright, and the gold foil along with the bright green border gave it a nice pop. I’ve got the Billy Wagner signed in gold, and it looks fantastic.

Also, Jeff is watching another homer leave the park.

There’s a lot to like in 1998 – several great sets, several good new sets. Again, the foil setting doesn’t scan well, but in person it’s a beauty. How can you deny that follow-through? That had to be a home run.

Ok, I went super oddball on this one. This was a five card set given away to members of the Astros kids club (the other cards feature Larry Dierker, Jose Cruz, Craig Biggio, and the Astrodome). I mean, I have some cool cards from 1999, but a lot of them don’t scan well – like the bottom/center of this Ovation card. I love the textured baseball backdrop though, and the full name on the jersey.

Again, throwing in a little-known oddball. I think this was a regional insert placed in shoeboxes. There’s a Biggio card as well, but I also have one of USA softball pitcher Michelle Smith. I can’t find any information on them, so if you know about them please share.

That EX Century is a great card from a great set that just scans like crud because of the transparent center and translucent sides. Ah well.

God. There are so many damn sets in 2001. Donruss returned with a glut of mostly crappy sets. Fleer was hit and miss with about 20 sets, and Topps as well. Upper Deck launched even more as well, and seems to have done fairly well across the board. My favorite is this lovely Super Tools insert from the MVP line. 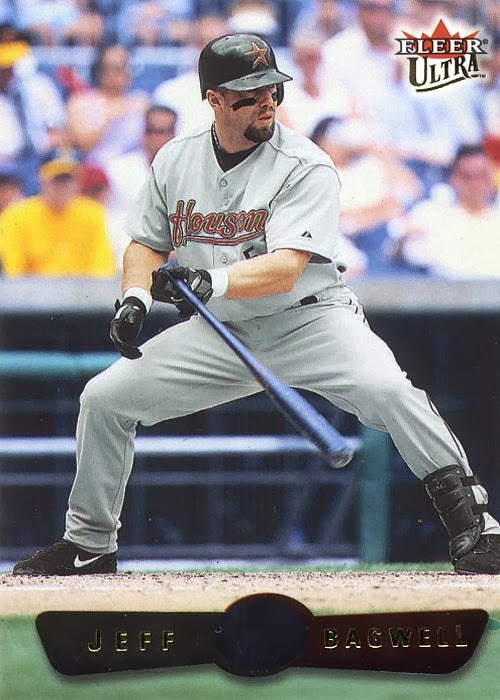 Again, there are another jillion sets in 2002. I like the clean look of ’02 Ultra – nice photos, a good nameplate (that doesn’t scan well, of course!) and Bagwell looks like he’s just getting ready to crush it here.

After 2002 my collection tapers down a bit, so I thought it would be silly to keep picking my favorites. Plus, this wound up being quite a bit longer than I’d originally anticipated. It was fun though!

I’ve got several more post ideas lined up – some eBay purchases rolled in, I stopped at the local-ish card shop, and the first few autographs have trickled into my mailbox. Plus I’ll have a small post on some scores from a stop in Nashville last summer.