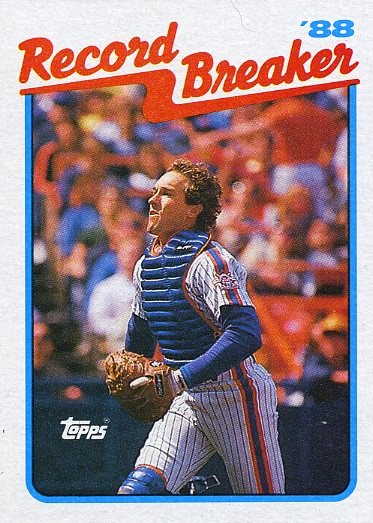 I opened up my mailbox yesterday and discovered a fine trade package from Tom of The Angels, In Order. Among the goodness inside was a stack of ’84 Topps that’ll push me a bit closer to completing the set, a nice chunk of early 90’s Astros, and a few of the ’88 Donruss cards I need.

Oh, and there’s this: what was the #7 card on my Most Wanted list, 1989 Topps #3 depicting Gary Carter’s record for career putouts. Thanks Tom!

Alright, now I didn’t really expect this one to be too hard to track down. But, the addition of this card brings me a mere two cards shy of completing the 1989 Topps set. That would be my first compiled set ever.

I suppose it’s time to add the following two cards to my Most Wanted column now.

Of course, I wouldn’t mind if anybody had a spare #697 Franklin Stubbs with the white Dodgers script, either.
I’ll share more of the goodies Tom sent over in another post.