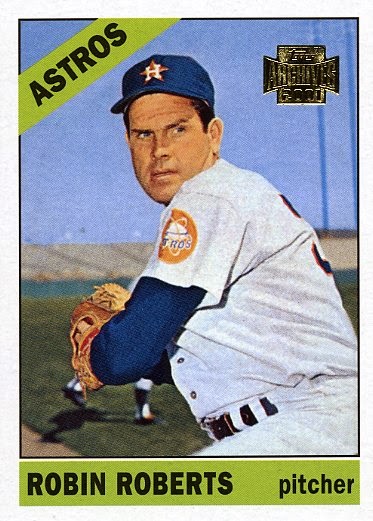 Some nice stuff has been popping up in my eBay saved searches, so I’ve been on a little bit of a buying spree. A light spree, we’ll say.
I probably need to be a bit more prudent in general and cross-check my findings other places like COMC (which I haven’t even delved into yet), Sportslots, and Just Commons (which I’m planning to finally order from next month for my birthday).

This great 2001 Topps Archives reprint of Robin Roberts’ 1966 card was just too good to pass, however. It was less than a buck with free shipping.

1966 Topps #530 is Roberts’ only card depicting him as an Astro, save for a team-issued picture pack card from the same year. Now I just need to track down the original!

There’s still a lot more to come from the big vintage boxes I bought, I just haven’t had a whole lot of time to scan and chronicle them. I decided to give the nearly complete ’74 set the binder treatment, seeing how I was about 40 cards shy of a full set, and I’ve been putting together pages the last couple days.

Oh, and I’m definitely ear-marking some stuff for trades, and will be sure to see what’s available if something interests you. I’m thinking I’m nearing the time when I should start a Trade Bait gallery in my flickr account, as I’ve noticed some of you do.