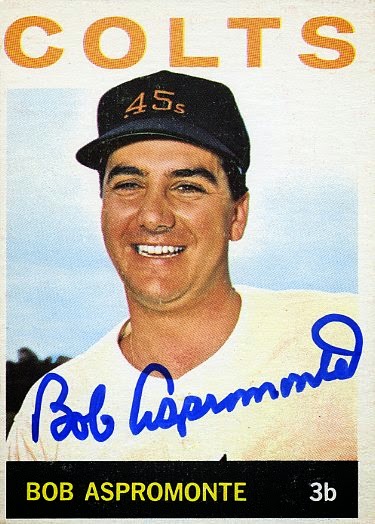 Ok, time to write another blog post, I suppose. Things have been a little busy on my end after getting back from our vacation, and I’ve been neglecting this space in favor of other endeavors.

I got another TTM return recently – this beauty actually came back last week, but I’ve been too preoccupied to scan it in and post it (which is ironic considering it’s taking me probably about ten minutes total to do that right now).

Aspromonte was one of the first stars for Houston, and by the time his tenure in town ended he had established the club record for grand slams, belting six of them. There’s a fantastic story about him hitting a few homers for a young boy who had been blinded early and was in Houston to have some of his vision restored through surgery. The best part is that this is one of those crazy movie story bits that actually happened.

Mr. Aspromonte lives about twenty minutes from me (thanks Google Maps), and this return came back super fast at just three days. He even signed the piece of cardstock I’d added to protect the card (perhaps a trick I’ll keep trying, particularly for my nicer older cards) and as if that weren’t enough, he added a signed bio page and a pair of articles about his playing days, signed as well.

Aspromonte brings my return total on the year to thirty-two, which means that I need to get started on writing letters and sending out the stack of cards on my desk that I have earmarked for requests.