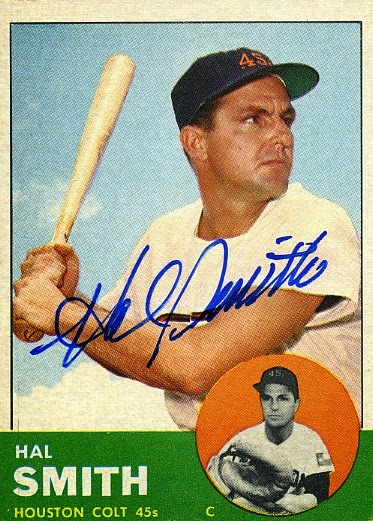 I didn’t get to my mailbox yesterday (everything is being sent to the P.O. Box I have right now as we’re moving soon), so when I popped by this afternoon I discovered a great return awaiting me. Number 37 on the year comes from Hal W. Smith, former catcher for several teams including the Pirates and Colt .45s.

In the 1960 World Series, Smith hit a go-ahead homer that looked like it would win game 7 for the ‘Buccos, until the damn Yanks came back to tie the game. That, of course set up Mazeroski’s epic game-winning dinger to win the series. After losing the starting job in Pittsburgh, Smith was left unprotected in the 1962 expansion draft and was picked up by Houston.

I didn’t get the World Series inscription I was hoping for on the ’61 Topps card, but this was a great return nonetheless.