I opened up the mailbox to find some more fresh ink awaiting me yesterday morning. This return was from Sean Casey, whom I sent to via the MLB Network office back near the start of the season.

Well, the 82 day wait turned out to be worth it, as Sean signed all three cards I sent him. I remember him as an Astro-killer, and while his triple-slash line against us was a decent .307 / .347 / .468, he absolutely mashed Astro pitching in the early third of his career before tapering off in the middle. I thought the 2000 UD Victory card to the right and all of its negative space would make for a nice autograph, and I think it came out pretty well. 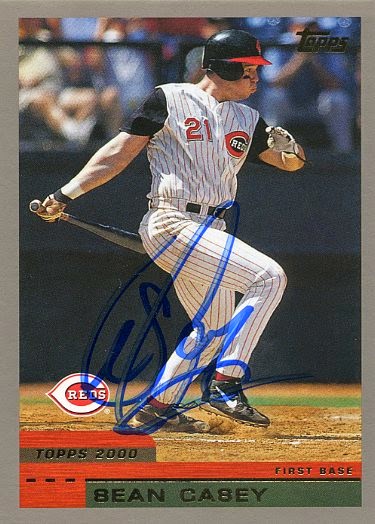 I was pretty happy to see this return make its way back to me because I’d sent the Just ’99 card on the left here as well. I have a post in the works about an epic road trip I went on that year with my father and brother, and in preparation for the trip I’d tracked down the inaugural 50-card 1st series of that set – and eventually the cards 51-250 as well. This one comes from the second series, so it doesn’t help with my primary goal of getting the first 50 signed, but it does fit with a potentially much larger overarching goal of the whole set.
Sean’s cards put me at 47 TTM returns on the year, which is just slightly behind the pace of my goal of 100 returns on the year. I dropped several more in the mail the past week, however, and have a nice stack pulled aside. Time to write some more letters.
– Bru