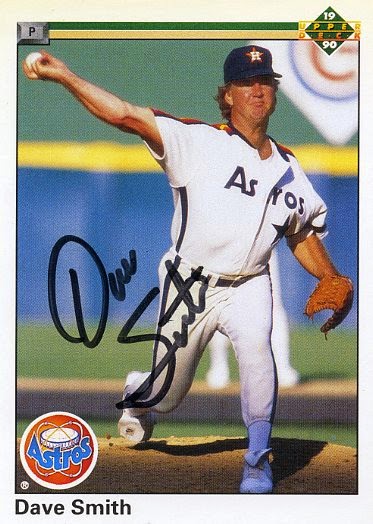 Ok, as has I mentioned in the last Catch O’ the Bay post, I put a moratorium on my eBay buying for a while. We’re trying to do some serious budgeting, and eBay purchases are certainly something of which I can certainly afford to leave behind. I’ll still keep up with my saved searches in case something crazy pops up, but I don’t expect to buy anything for some time.

I did have one last purchase come in lately, though it hardly broke the bank. In my quest to build my All-Time Astros autograph roster, I finally sat down and researched which former players have passed. Several were already known to me, of course – Darryl Kile and Ken Caminiti being the two that hit closest to home, as I watched them while growing up.

I knew about Dave Smith’s passing thanks to a prior visit to the last card shop in town. While buying a stack of Astros and chatting with the owner, it had come up in conversation. So I made a saved search for Smith’s signature online and kept track of the cards going up for auction. I finally bit on this ’90 Upper Deck, which filled a need nicely for less than a buck-fifty. It’s the first of a few new autographs that I scored in my quest – the rest I’ll save for a post later in the week.