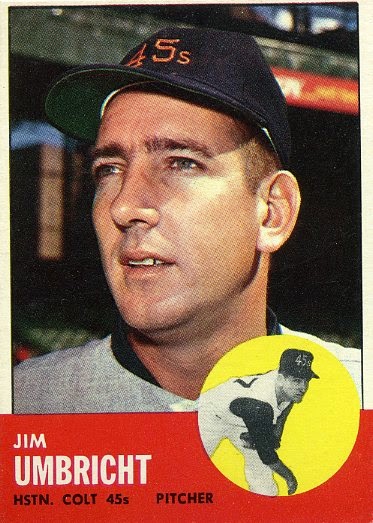 Like any card-hunting collector, I went into the recent card show with a few goals: grab a huge stack for my team collection, possibly pick up some stuff I can’t find at the big box stores and my woefully understocked LCS, and finally, if possible, load up on some nice vintage cards.
Unfortunately, I was limited on both time and funds, so I didn’t get to dig for nearly as much old cardboard as I wanted. I’d arrived about two hours before the show was scheduled to end, and the light traffic by then led most dealers to start wrapping up their stuff half an hour early.
I did manage to hit a few dealers for some nice scores, though. Flipping through a box of 50’s to early 70’s discounted cards netted me several nice finds that you’ll see here, including this great 1963 Topps of Jim Umbricht. Jim was stricken with cancer and passed after just a couple years of the club’s existence, and as such his was the first retired number in the history of the franchise. He was taken far too young. 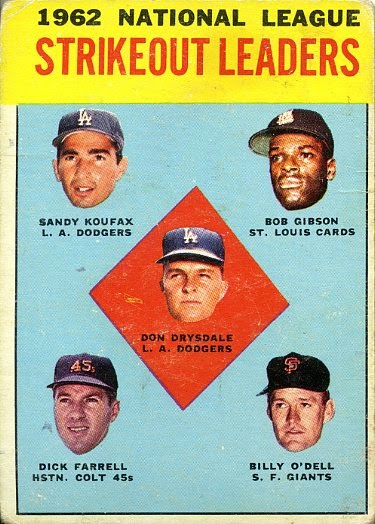 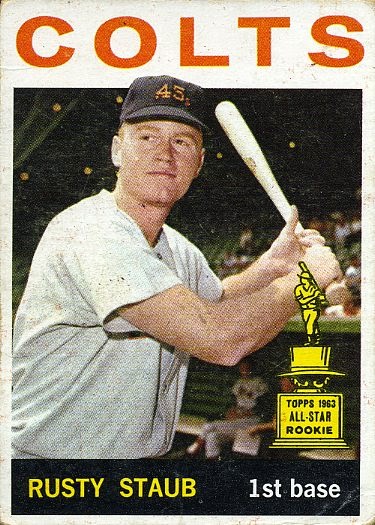 My main vintage goal was to keep chopping away at the Colt .45’s cards that I still need, so finding this Strikeout Leaders card that features 3 HoFers and Houston pitcher Dick Farrell for just 2 dollars was quite a deal. The 1964 Rusty Staub rookie cup was the most expensive card out of the box, and ran me a stiff four bucks – not bad at all for a ’64 of Le Grand Orange that is in nice shape. 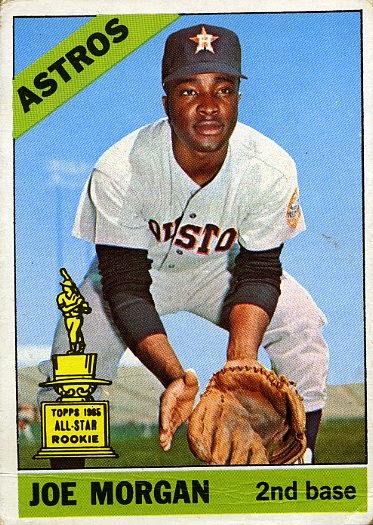 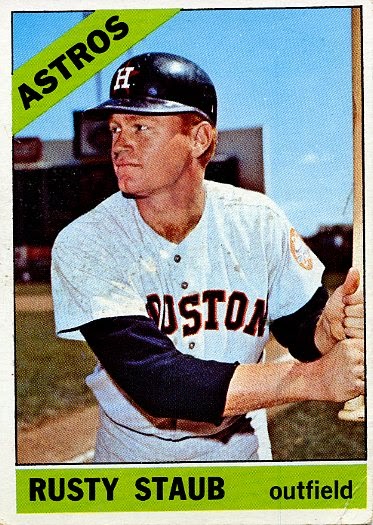 Moving on to 1966, I grabbed another rookie cup, this one features a great shot of young Joe Morgan. I selected another Staub for the files as well, but I really wish that Topps hadn’t cropped out his bat like that. 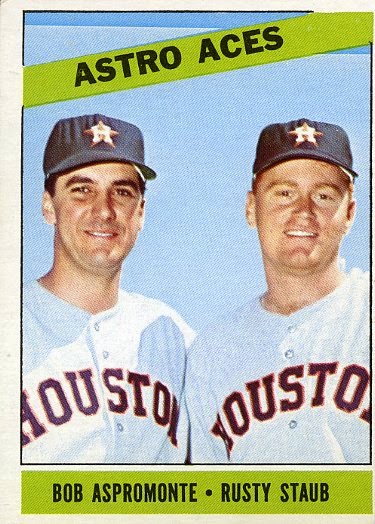 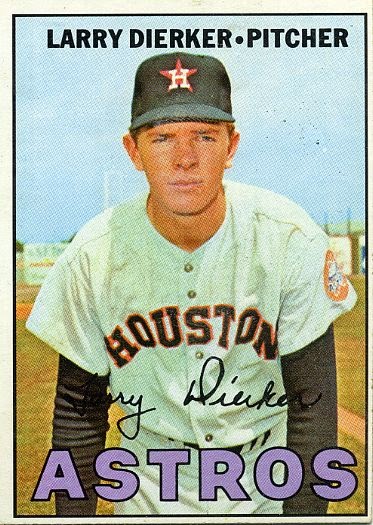 I managed to nab an upgrade for the collection with this Astro Aces card, although why it would have that title for two sluggers is beyond me. Finally I picked up a couple 1967’s, including this young Larry Dierker.

The cards in this box showed some wear, but I managed to pick up several nice pieces that may have been slightly off-center, with some lovely rounded corners and perhaps the most meager of creases. All in all, they’re wonderful. I think we can all attest that sometimes a well-loved piece of cardboard is more fun than a pristine, “slab-worthy” example. Maybe it’s because I’m just so sick of the idea of encasing cards in plastic. I just really want to be able to pull them out from time to time and examine them. 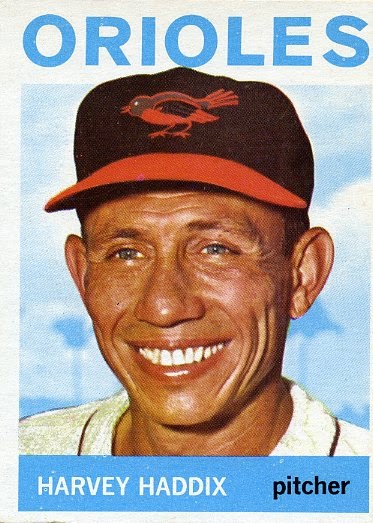 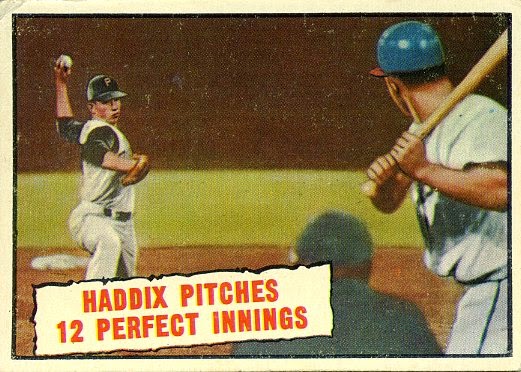 In my recent post about card-hunting in Nashville I mentioned starting collections for Dock Ellis and Bill “Spaceman” Lee. What I didn’t mention was that I already have a tiny collection in progress of another pitcher known for a quirky piece of baseball history, and that is none other than Mr. Harvey Haddix. My first Haddix cards came from buying some 60’s Pirates while my dad was building his set of guys that were on the 1960 World Series team. Finding this 1961 Topps commemorating his 12 inning perfecto that was unceremoniously lost was a no-brainer, and when I came across the 1964 in the same box I decided that I’d go ahead and go for all of Harvey’s cards, not just the ones from his Bucco days. Trading Card Database lists a total of 86 Haddix cards, which sounds like a pretty reasonable goal to me. Harvey passed in 1994, so there won’t be a ton of hard-to-chase autos or relics around, either. 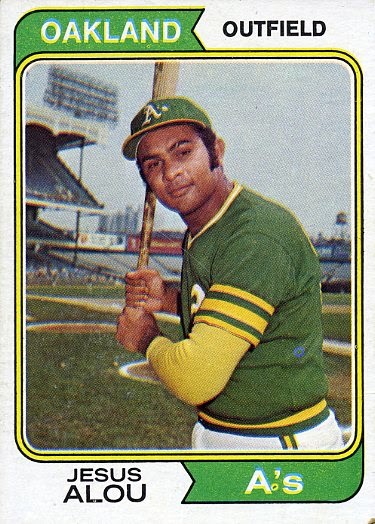 Of course, one thing I wanted to keep an eye out for were cards from the older sets I’m working on as well. I’d bought up a lot of the 1968 Topps Game insert from both eBay and the card shop, so when I found a vintage dealer early in my browsing I immediately decided to check for any cheap additions I could make. Both the Tony Gonzalez and Orlando Cepedas are in fine shape and ran me a buck a piece. I picked up a few 1974’s from the same seller, inching myself closer to completing that set by picking up the corrected Jesus Alou card. 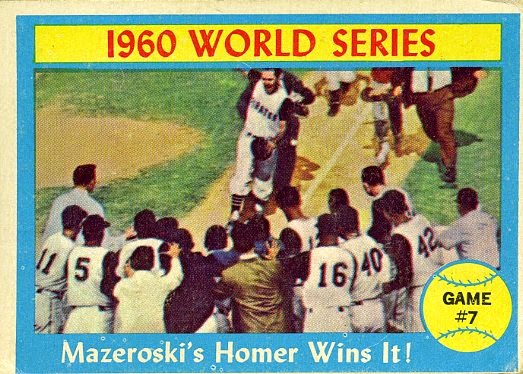 My favorite pickup of the day, though, was this card depicting Mazeroski’s famous celebration after blasting the home run that won the 1960 World Series. Maz was the first vintage player whose cards I collected – while my father was picking up Clemente’s and assembling his 1960 Pirates roster, I fell in love with the stories of Mazeroski’s heroic home run and famously quick hands at second base. As a youngster I managed to pick up all of his base Topps cards save for the 1961 (which I bought last summer) and a couple All-Star cards and Post issues, but tracking down these World Series cards has always eluded me. Now I need to get the “Champs Celebrate” card and his 1961 All-Star card, and I think I’m set on his Topps appearances from his playing days.
So no, I didn’t get all the time I’d wanted, and I didn’t get to spend as much as I wanted, and I didn’t find the dime boxes I wanted – but I certainly walked off a winner after this show.
– Bru