by MarcPosted onOctober 2, 2014July 11, 2019
One of the things that I’ve actually kind of dreaded about being a Bagwell supercollector and someone striving for most of the Astros cards ever made has been chasing down some of the rarer cards that are out there. With limited funds in my collecting budget, I’m not able to go bonkers on the auctions to pick up ‘graphs and relics, and when I heard that card companies were/had been releasing printing plates, I about died. There was no way I was going to get my hands on one, I thought. I started a few eBay saved searches to keep track of what popped up and the prices at which they were going. Someone keeps listing a freaking Kaz Matsui for FORTY-SOMETHING DOLLARS. You’d be hard pressed to get me to pay more than four, including shipping.
Seriously, never getting a precious plate of one of my precious Astros heroes, I thought again.
Well, I was wrong. Behold, my first plate: a 2007 Bowman Craig Biggio yellow! 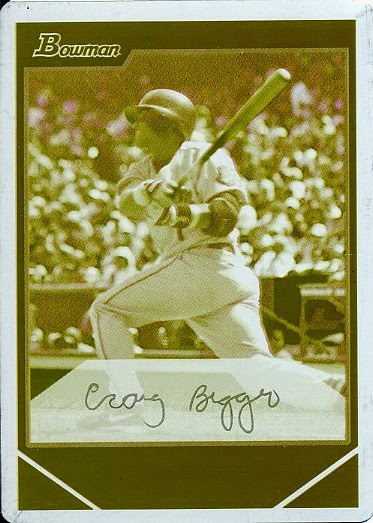 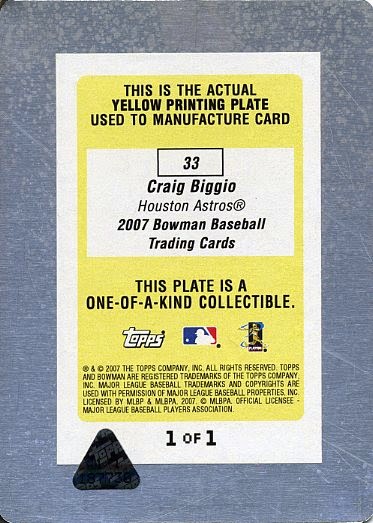 After missing out on a few cheaper 90s plates that had come and gone, and letting some lesser names pass by, I finally decided that I was going jump for this one. First, it’s a great picture of Biggio, and while it is all yellow, there’s a lot of nice definition here. The facsimile signature even looks pretty good as well. I managed to get this one for about 13 bucks shipped.
Can I just mention that these plates are far lighter and thinner than I thought they would be?
I definitely won’t be able to spring for all the plates I want, but perhaps I can get my hands on a few more nice ones at decent prices. Certainly not the 99 dollar Brad Lidge Turkey Red that keeps getting relisted, but I’m definitely going to try to pocket one plate for each of my favorites from the team.
So, uh, if you pull an Astro plate – let me know before you list it. I’m interested.
– Bru