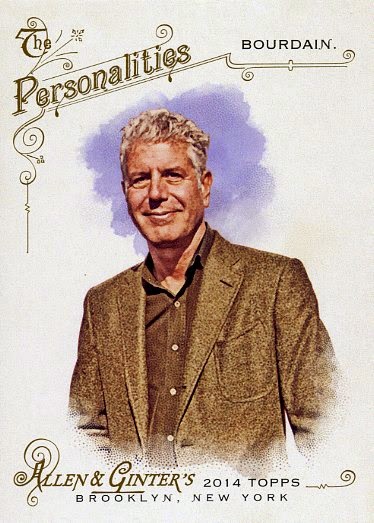 In my recent hundredth post, I mentioned that I wanted to build a 2014 Allen & Ginter set. I blame this primarily on all of you horrifically awesome card bloggers out there and your silly Gint-a-Cuffs madness that makes me wish I had the discretionary funds available to participate.

Oh, and definitely this card. This is a badass card, if there ever was one – and we all know there are a lot of them.

I know Anthony Bourdain may rub some people the wrong way, but I am certainly not in that camp. Yes, his programs may have become a little formulaic, but I straight up love the guy. When I saw that this card was in the set, I had to have it. The same can be said for this year’s Judah Friedlander card.

I hadn’t planned on buying that much A&G this year, as I’ve been a bit underwhelmed since getting back in the card game. As a photographer, the pretty poor print quality for some cards was bugging the guts out of me (e.g.: see Hal Newhouser’s card this year, but I think that’s about it) However, I think they have cleaned it up nicely for 2014, and I have to say that I just love the filigree frame and team name. I could do without the Brooklyn, NY down there, but I doubt that’s ever changing. So after a couple of rack packs featuring some stellar names, I decided to jump in the waters for the set. 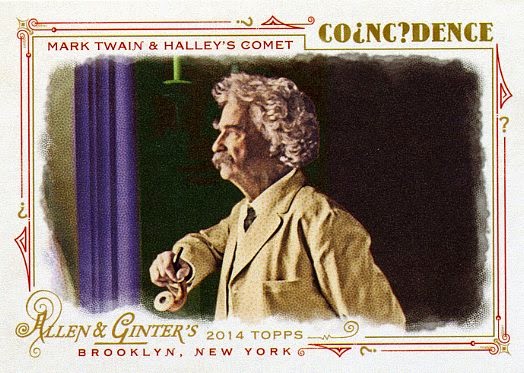 These scans are nearly ancient by blogging standards now, but I’m fairly certain this is the rack pack that sealed the set chase for me. Mark Twain was phenomenal, and I’ve been to visit his house before. It’s a pretty fantastic spot and I recommend everyone stopping by – I believe it’s in Hartford, Connecticut. We were on a family trip and it was some time ago, so I can’t say for certain. 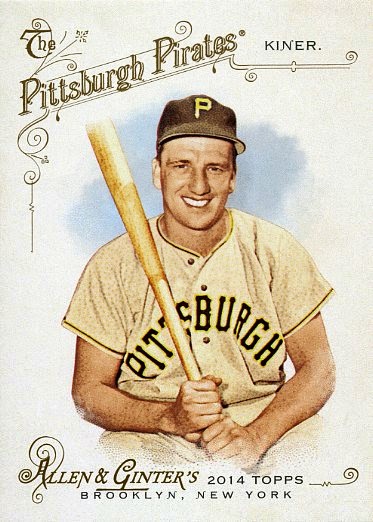 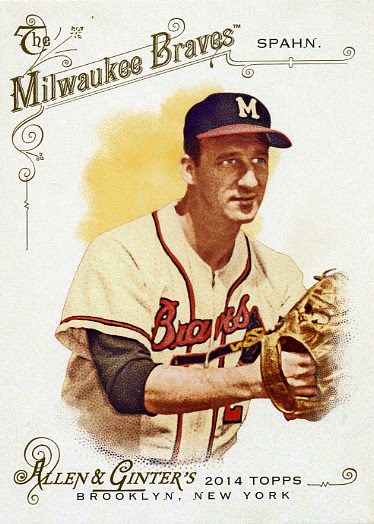 One of the things that drew me into this year’s set was the selection of Hall of Famers; I think the selection is really great. I love that Topps has chosen to drop Ralph Kiner into some products lately, as well – especially as a Pittsburgh Pirate. I was lucky enough to get Kiner’s autograph on a ’54 Bowman way back when, and my only regret is that he’s depicted on the Cubs. At one of my younger card shows, I was able to get Warren Spahn’s autograph as well.

As you can tell by the gold borders, I acquired my rack pack at the local Target. I was happy to start off with a pair of HoF second baseman (Biggio better get in this year) and a black parallel of ex-Stro *sigh* J.D. Martinez. The Josh Donaldson is an A&G back. I love watching him play. 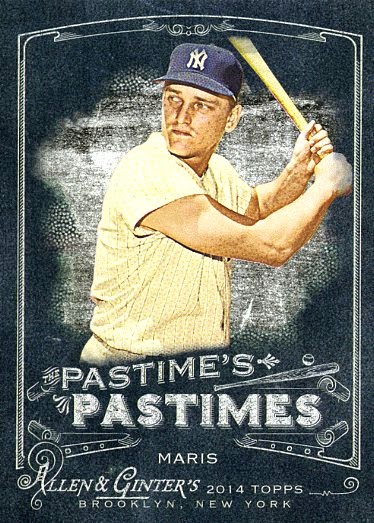 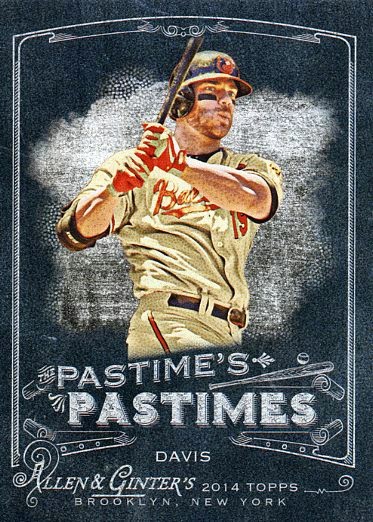 These were the two Pastime’s Pastimes inserts I received. I’ve seen a lot of split decisions among the card bloggers – some of you loathe this insert and its sprawling 100 card checklist. Some of you love it. Put me in the latter category, even though this has an awfully clunky title. I’m slowly working on putting this together as well.

Ok, now I know this draft is old, because when I grabbed that rack pack I saw my first hangers of 2014 Donruss Series 2 and quickly snapped up two of them. Here are the inserts. 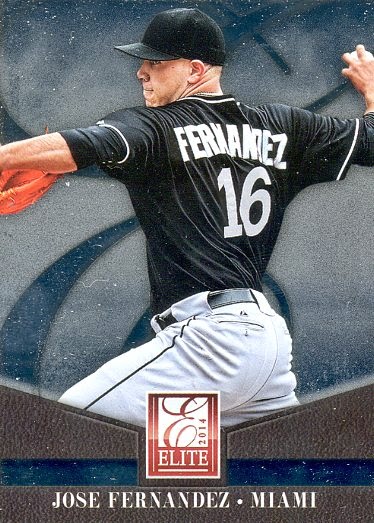 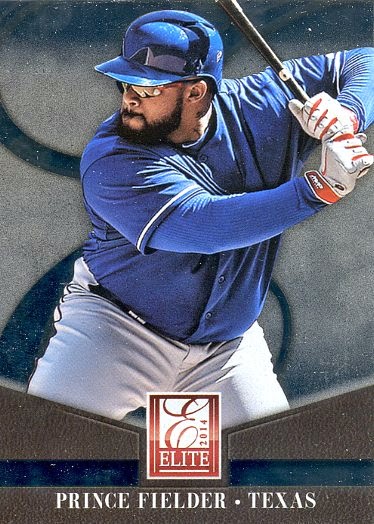 Wow, these, uh, feel uninspired. It’s not the logoless-ness, either. I was hoping for something more than a return to the well-worn Elite series. 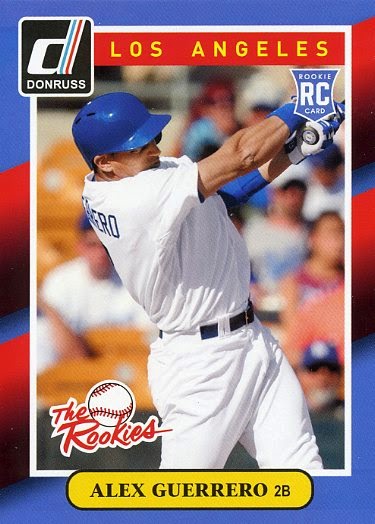 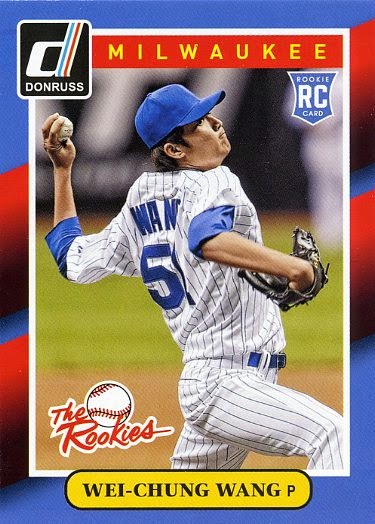 Some rookies. Not bad, if you’re interested in these guys. I’m not. 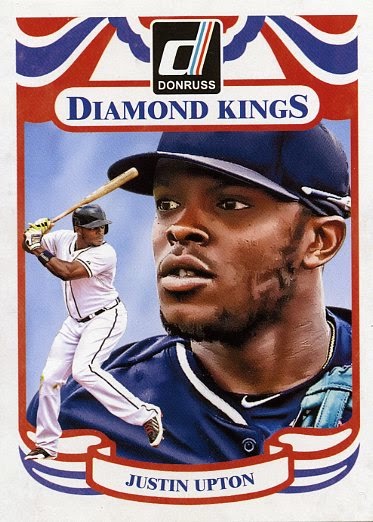 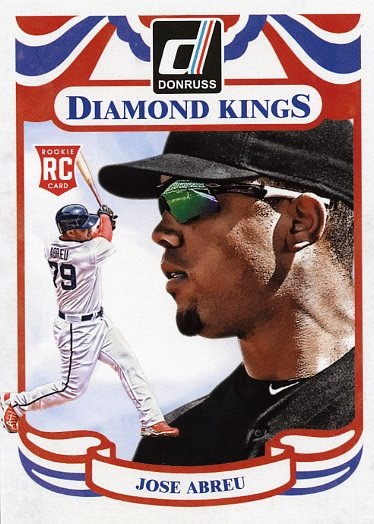 Diamond Kings! I’ll hold onto these. 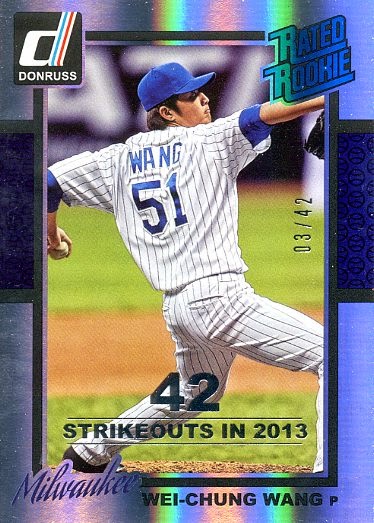 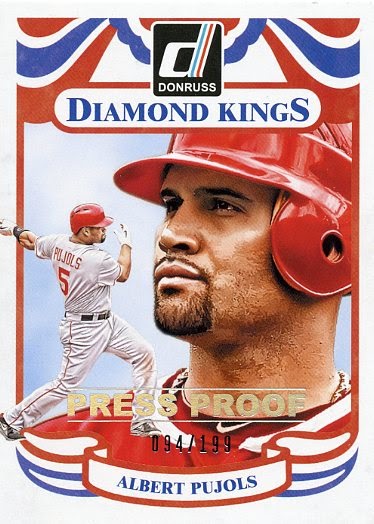 I pulled a Season Stat Line parallel of Wei-Chung Wang (numbered a very nice 03/42) and the Silver Press Proof of the Albert Pujols DK. Not too shabby, though I can never forgive Pujols for what he did to essentially end Brad Lidge’s career in 2005. 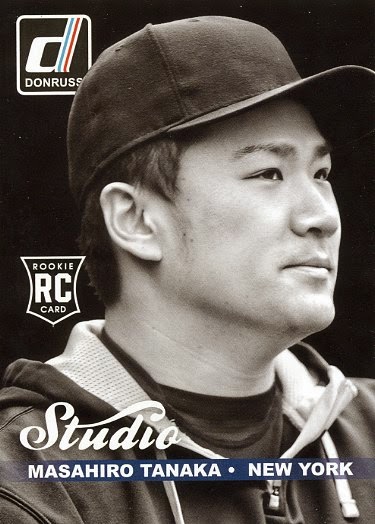 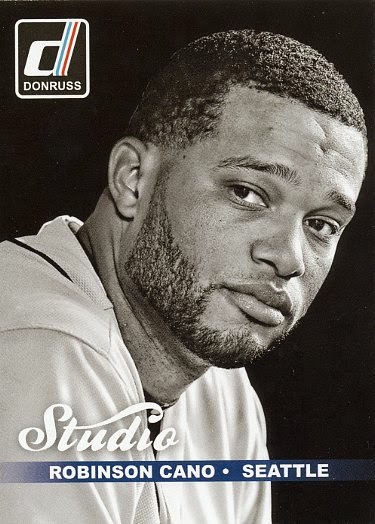 Wow, again so very bland. This does a severe injustice to the Studio sets of old. There’s no joy, no whimsy, just some boring black and white shots of what look like dugout stares. This breaks my little photographer heart.

However, Panini would stand to redeem itself in this round of big-box card sprees. I’d been on the lookout for some packs of Golden Age, and finally lucked into finding some. 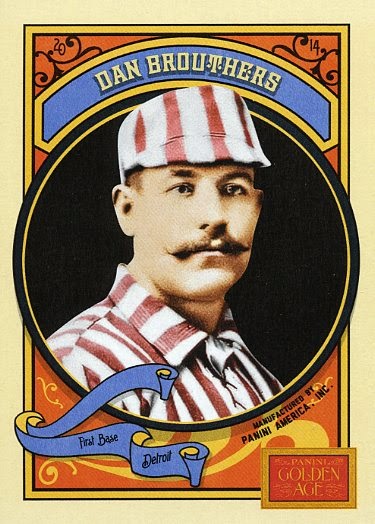 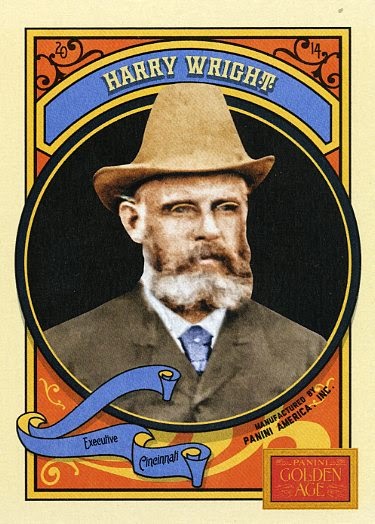 At only 150 cards deep, I toyed with the idea of putting together this set as well. I really like this year’s Golden Age design, though the overall checklist leaves something to be desired. I don’t need a bunch of TV sitcom stars from decades ago or a handful of trophy horses. The old baseballers, however, I can certainly get behind. I find these especially fitting as I just recently started watching Ken Burns’ Baseball for the first time. I saw bits of it as a kid when it first aired, but I certainly didn’t have the attention span to soak in it. 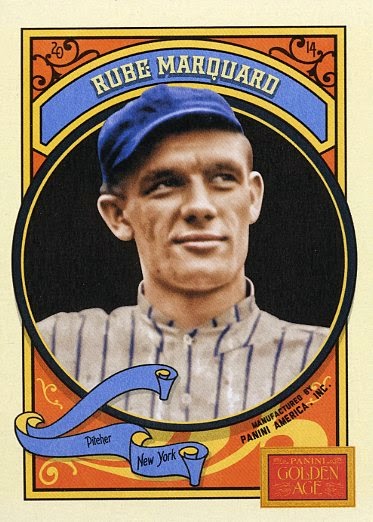 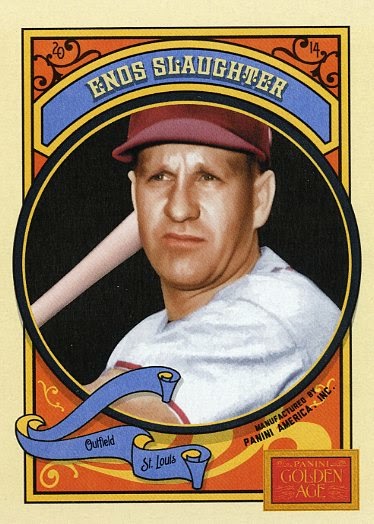 Some more old baseballers. Can I say I’m tired of Enos Slaughter, though? “Country” was a deserving Hall of Famer and a hustler, and even put in a year as the player-manager for the Houston Buffs in 1960, but I can’t overlook that he spiked Jackie Robinson and was one of the more vocal racial taunters. 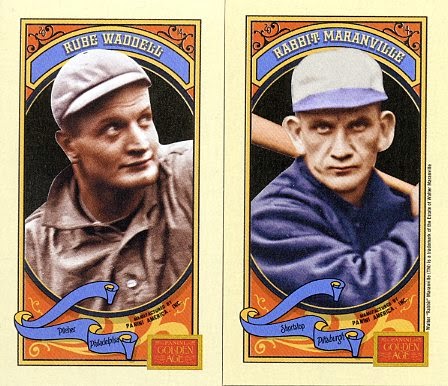 Minis! Oh man, after watching Baseball, I desperately wanted to pull a Rube Waddell card. I’m so glad I did. 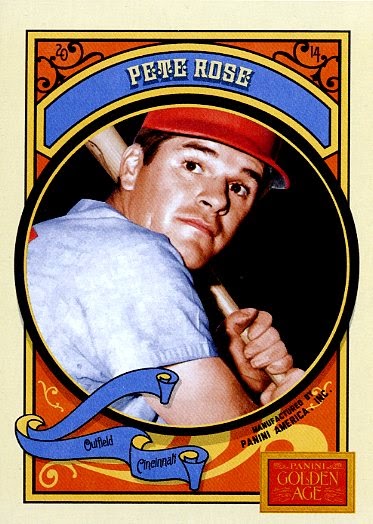 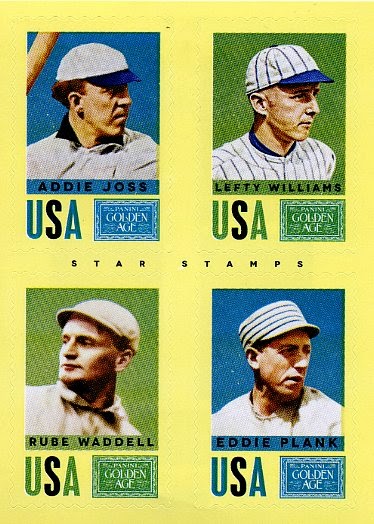 Hey, Charlie Hustle himself. This four-up of ancient players is a set of stickers. After a little curious digging, I’d recently discovered that I share a birthday with Mr. Addie Joss. 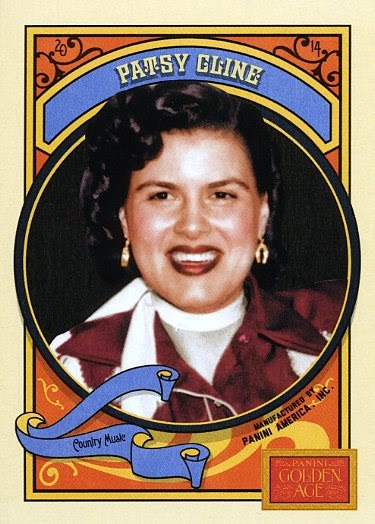 Let’s wrap up with a pair of beauties. These are a couple of the non-baseballers that I can certainly support. My only regret is that neither of them are still around for me to send off for an autograph. Could you imagine how great that would be?
All in all, Golden Age has some nice moments. Just don’t give me another horse card. Or the Lusitania. Geez.
Ok, more posts coming soon, I promise. I’ve got about two dozen drafts prepped with scans.

0 Replies to “Busting Into Some Panini and Ginter”