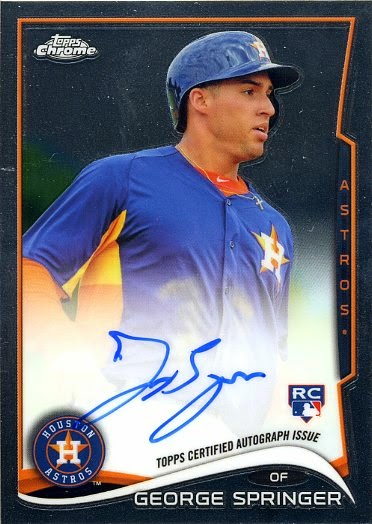 Remember back when I posted about a trade with Brad and his Phillies blog? What, that was only two posts (and a month) ago?

Well, this came back much, much faster than it has taken me to post, but my fantastic Chrome-y George Springer “Rookie Variation” certified autograph showed up in the mail a scant two weeks after I’d input my code. That was a nice surprise, given the stories I’ve heard about how long Topps can take on redemptions, but apparently they’ve really stepped up their game in that department. That’s nice to see.

The photo isn’t all that special, but at least I’ve got something here that’s more than just a GS from George. I’m ninety-five percent positive that this depiction is from a spring-training game, when Springer was sporting a jersey number in the 70’s. It’s the dirt on his uni that makes this evident, as there’s a pretty sweet shot of him diving into home that I believe is from the same game. That would have made for a phenomenal card. 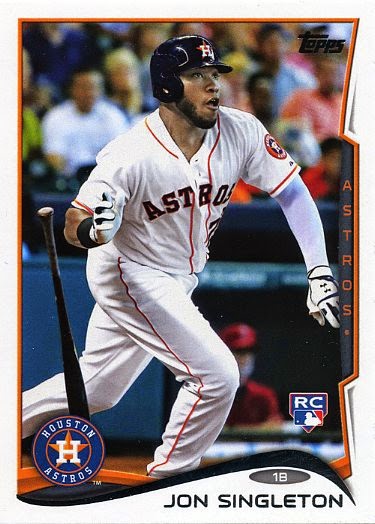 In addition to George, I had picked up a pair of packs of 2014 Update. While underwhelming in large part, I did manage to pull a pair of ‘Stros. Well, Krauss has since been given the boot and subsequently picked up by the Angels. The Jon Singleton was a rather nice pull, and I sincerely hope that fellow can put together a good season in 2015. His numbers wound up being pretty foul by the end of the year, but he’s got such massive talent and power that he could be a really good player.