by MarcPosted onMarch 22, 2015July 12, 2019
Rosters are getting cut, and Spring Training is starting to wind down with Opening Day just over two weeks away. Which means it’s a perfectly good time to tell you about the Astros “Winter Caravan” back in mid-January and the autographs I snagged as a result.
Each year – well, for at least the last few years – in advance of the annual FanFest the Astros have sent some players and former players to various community appearances. There’s usually a daytime volunteer work thing of some sort, then they drop by a fast food joint, then an Academy, and probably some thing in a bar/restaurant. 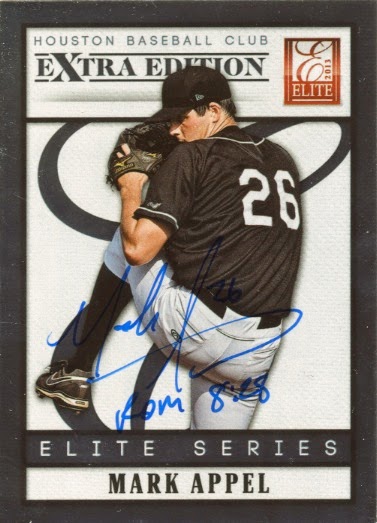 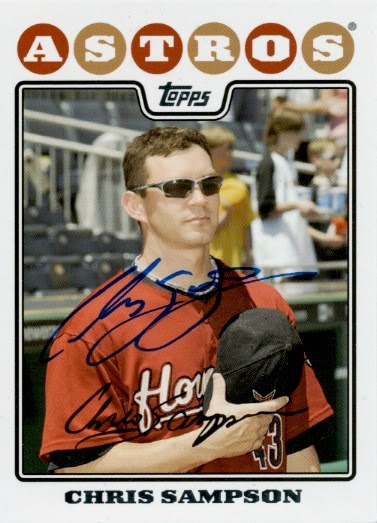 The first day I was pretty lucky – the team sent a few pitchers to the Chik-Fil-A just two minutes from my work. Fortunately my job is pretty awesome about flexible hours, so I scheduled my lunch just a little later in the day and grabbed some Chik-Fil-A of course! After waiting out the media clamored around Mark Appel, I got to meet the young Stanford grad, asked him a couple questions, and got an autograph. Of all the former players, I’m not sure why the team trotted out Chris Sampson, but I needed an autograph from him as well, so I was pretty happy to check him off the list. 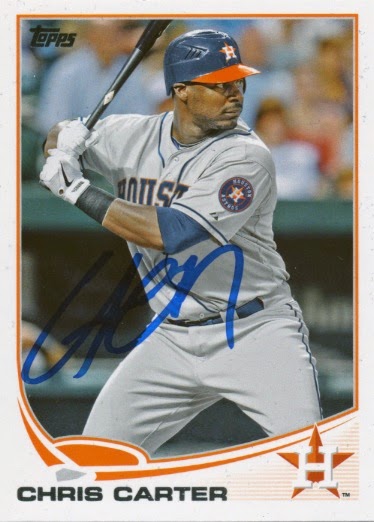 I got lucky again when I found out that the Astros broadcaster Robert Ford (who calls a great game by the way) runs a Thursday night radio show from a bar a few miles down the road from my house. That week was the last show featuring players before they reported for Spring Training, and L.J. Hoes and Chris Carter were the guests.

Chris is huge, and young. It’s struck me this year that at 30 now I’m older than most of the ballplayers in the league. Meeting the big slugger and realizing that he’s still younger than me was kind of astonishing. At one moment I was just thrilled to meet him, while at the same time I wanted to take him around town and show him rad spots to eat and all sorts of things. These guys are humans too, ya know?

Chris was kind enough to sign three cards for me while he took a break from being interviewed. 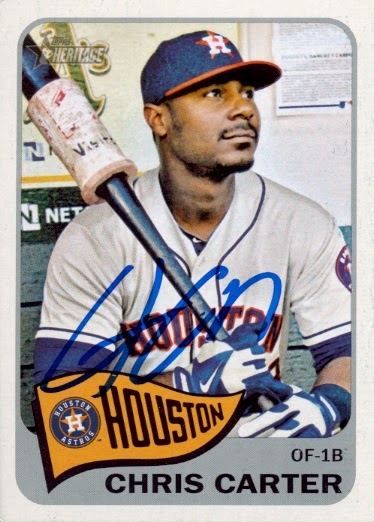 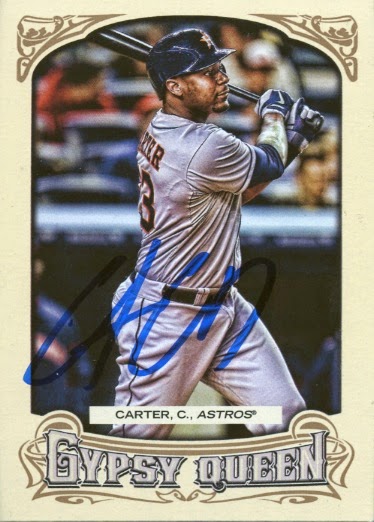 These two are certainly my favorites. I came around on Gypsy Queen this year, and Chris just looks fantastic posed in the dugout there. 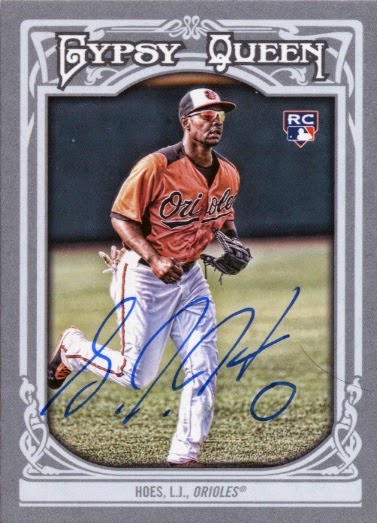 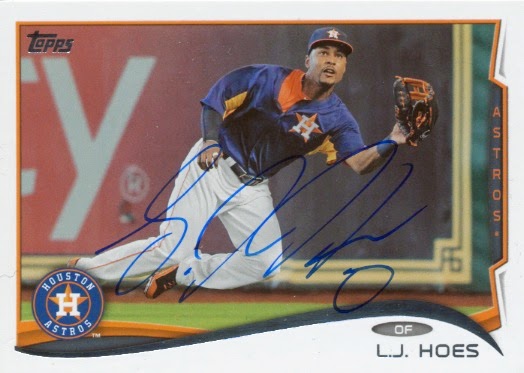 L.J. was awesome too, and really soft-spoken. It took me as a little bit of a surprise, I suppose, because they may seem a little reserved in the clubhouse interviews or whatnot. But I suppose they are a bit out of their element in public, with scores of fans around. These two cards came out really nice. 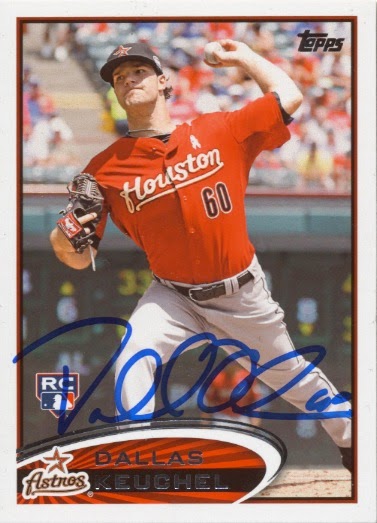 The next day in the afternoon they sent a trio of pitchers to a Whataburger, including Dallas Keuchel. He’s much more beardly than as pictured on this rookie card. I was a bit worried that I wouldn’t be able to snag him, as they had him working the drive through when I showed up.

New Astro and human autograph machine Pat Neshek was on hand, and while I didn’t have a card of him handy, the Astros had some postcards. I got in line for Neshek and got his signature. He’s got an Astros card in Heritage, so I know I can get a card for my collection this season when I write to him.

While he was signing for me, I asked about his autograph collection, and whether he had a favorite. He balked a bit and said he wasn’t sure he could pick a favorite, so I just asked what’s the coolest one you’ve gotten lately, to which he replied that he’d picked up a Jimi Hendrix autograph of which he was pretty fond.

I got in line for the third pitcher and succeeded there as well, but more on that in a second.

Dallas finally emerged from behind the counter and the handlers were trying to valiantly shepherd the players off to their next destination, but I managed to sneak between the door and Keuchel. He was kind enough to sign one card for me, the last one of the appearance.

So who was that last pitcher at Whataburger? (By the way, all you non-Texans are missing out on Whataburger.)

It was none other than Astros legend J.R. Richard! 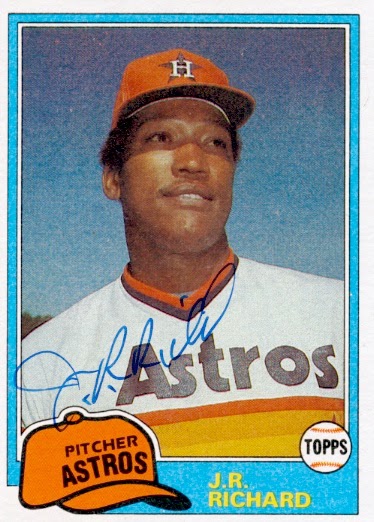 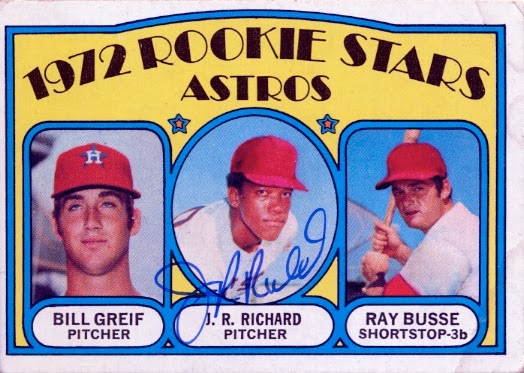 I hopped in line with a stack of cards, but in the interest of not being greedy I settled on getting just two from J.R., though he was happily signing more for people. I was really pumped to get his 1972 rookie card signed, and I picked the nice portrait of the 1981 Topps for the other choice. While there, I wound up giving away a couple 1982 Topps dupes that I had to a pair of little kids with nothing to get signed. Paying it forward paid off with the final Keuchel auto I nabbed.

I wish I could have gotten around to more of the appearances, and especially to FanFest (no thanks to business school for that one), but I’m pretty happy with all these additions!