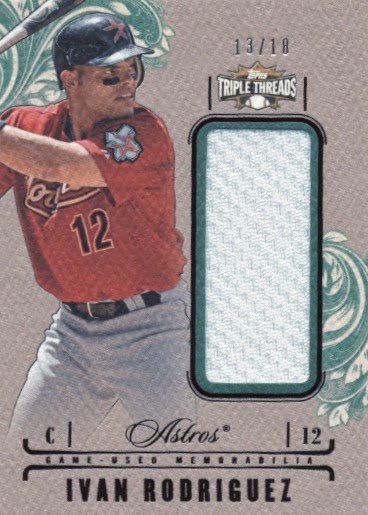 Whoa, Nellie (Fox) am I behind in posting! As always, I suppose. Work has gotten super busy with projects on projects, and the MBA program I’m in isn’t slowing down anytime soon.

Ok, so it slows down next week for “Spring Break,” but as an adult it’s hardly spring break anymore. That said, the wife and I are going to make a quick jaunt to New Orleans for a couple days to relax. After that it’s back to work and studying up for a couple of exams.

The nice thing is that I’m not so behind in my scanning. I’ve got a little over 20 posts prepped with scans – I just need to write them!

Anyhow, enough jabber. This is just a post to show off a 2014 Triple Threads relic that I snagged featuring Pudge Rodriguez. Plain, white and simple, but this is a really nice card. Topps decided they wanted to put Pudge in an Astros uniform several times last year, even though he spent less than a season in Houston. I’m not complaining though, as he was always one of my favorite players.