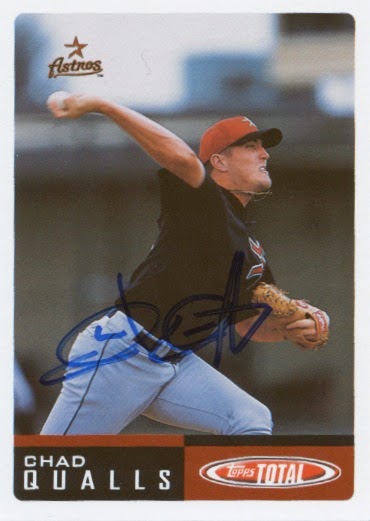 Well, it’s been a bit since my last post, but I have plenty of good news to report. First and foremost, I survived my initial semester of MBA school, plowing through five classes, with four A’s and a B+ in Accounting – I’ll take that. I’ve now got about a two-week break before school starts again for the summer, so hopefully I can write some blog posts in the meantime.
Second, and perhaps most important of all, is that I have once again found gainful employment! I’m working part-time as a project manager for Smilebooth and rounding out my work calendar running events for them. The people are awesome and it’s going to work really well with my school schedule.
Finally, I have a bevy of TTM autographs to share with you since my last update! This was going to be broken into several posts, but let’s just get right into it. 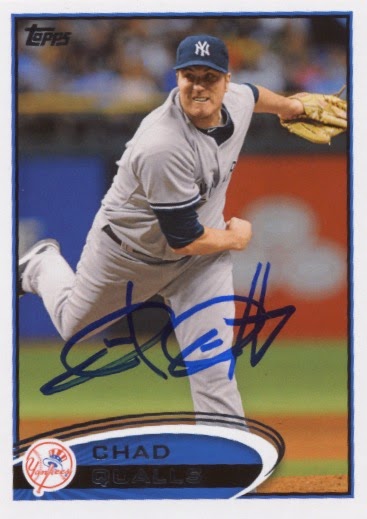 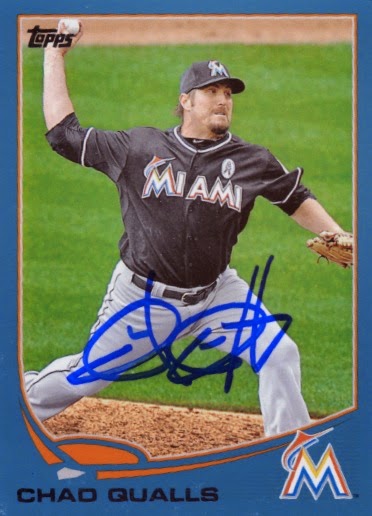 First up is a trio of consistent scribbles from Astros reliever Chad Qualls. He came up with the club as a prospect in the early 00’s (see that 2002 Total at the top of the post) before moving along to several other teams, returning to the club in 2014. When Jesse Crain went AWOL and never threw a pitch for the club thanks to an injury, Qualls became the de facto closer last year. After the club added Gregerson and Neshek this year, Qualls has become a late-inning guy who seems to get the save opportunities when Gregerson needs rest. I wrote to Chad during Spring Training and got a response back in just 12 days. 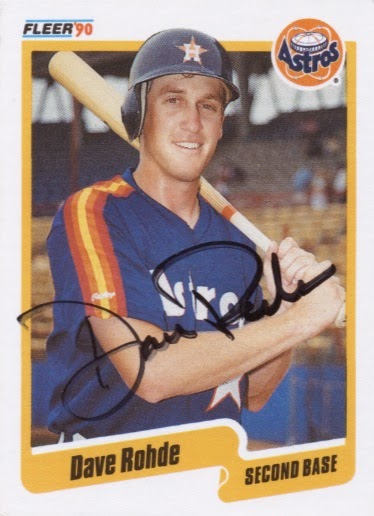 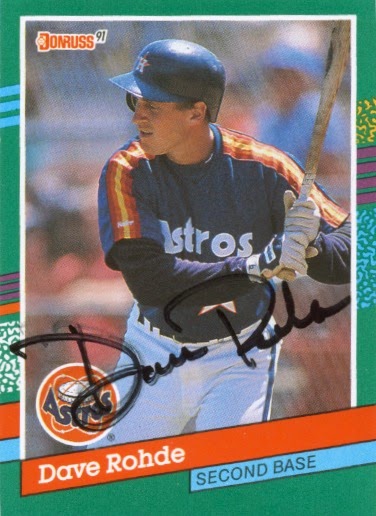 Dave Rohde was a fifth-round pick of the Astros that was supposed to come up and play a decent second base in 1990, but his anemic hitting kept him from winning the job. With Bill Doran gone and the Astros looking to save Biggio’s legs, Rohde was packed up in the deal that sent Kenny Lofton to Cleveland (sigh). These two cards were sent back in October and showed up in March for a 151-day turnaround, one of my longer successes since I started writing players again. 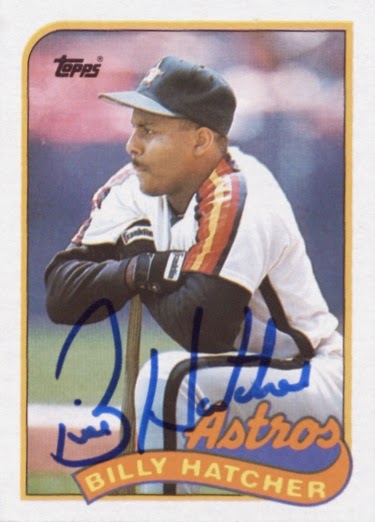 Wow, was I surprised when I opened up this envelope! I hadn’t seen many successes with Billy, and had resolved that I was probably going to have to fork out for a private signing, when I decided to give him a shot during Spring Training this year. Hatcher was a speedy outfielder for the ‘Stros from 86-89, helping them win the NL West in ’86 and eventually finding a championship with the Cincinnati Reds in 1990, where he now coaches. These beauties had a nice seventeen day turnaround. 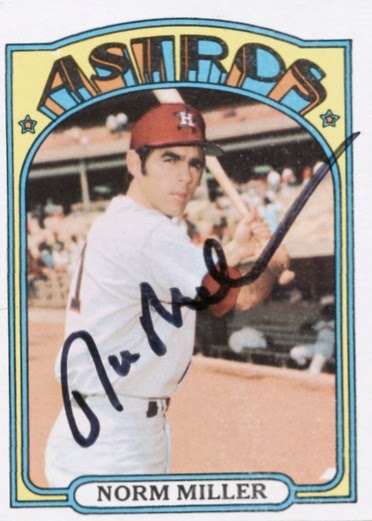 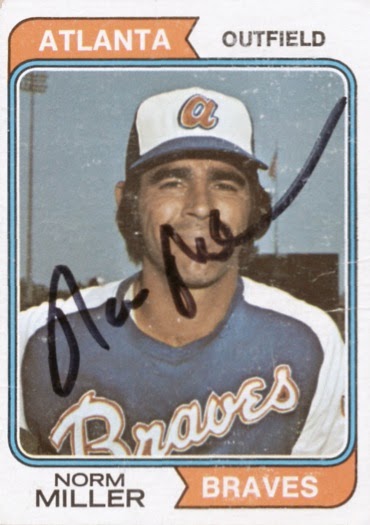 I wrote to Norm Miller last year only to receive an RTS, so when a success popped up on SportsCollectors.net I kindly inquired if the sender would share his address with me. With a new address in hand, I wrote to him at the beginning of March and sent these two cards. Miller originally came up at second base in 1965, but was moved to the outfield to get him more playing time. All in all, he spent nine seasons with the Astros before wrapping up his career in Atlanta. After his playing days, he returned to Houston where he worked in the front office for a long while.

Norm was also kind enough to answer a few of my questions with a nice little note. The 24-inning game that’s referenced is one in which Miller scored the winning run on a bases-loaded Bob Aspromonte dribbler. The six hour contest started with a pitching duel between Tom Seaver and Don Wilson, and I managed to find a cool writeup in the Chicago Tribune archives.
I’m also a bit stunned at just how many players from the era say that Clemente was their favorite to watch. It’s nothing against Roberto, but I guess I always expect another name or two to creep in occasionally. Clemente’s name is always there when I ask the question of whom their favorite player to watch was.

Human autograph machine Pat Neshek got back to me in just five days (!!!) when I wrote to him at the beginning of the season. I’d actually asked him to keep the two extra Heritage cards for some kids that might not have had anything to send to him, but he went ahead and signed all three anyway. If anyone would like one of the extras, let me know and maybe we can work out a trade for something. 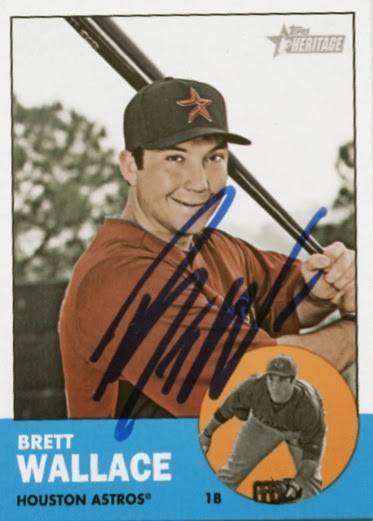 During Spring Training I figured I’d give a few recent former Astros a shot, hoping to score some replies from some of the guys fighting for roster spots.

Brett Wallace got edged out in San Diego thanks to all of the wheeling and dealing of A.J. Preller in the offseason. Due to the crowded roster, he’s stuck in AAA El Paso at the moment, a furious fightin’ Chihuaha. He appears to have maintained his AAAA player consistency, as he’s hitting .302/.411/.788 with 3 HR and 19 RBIs thus far.

I had picked up a certified Tier One Wally auto in a trade thanks to one of you generous bloggers (apologies, I can’t recall whom it was at the moment), but getting a few base cards signed always makes me happy. I dropped these in the mail at the beginning of Spring Training and got them back on April 11, for a turnaround time of 45 days. 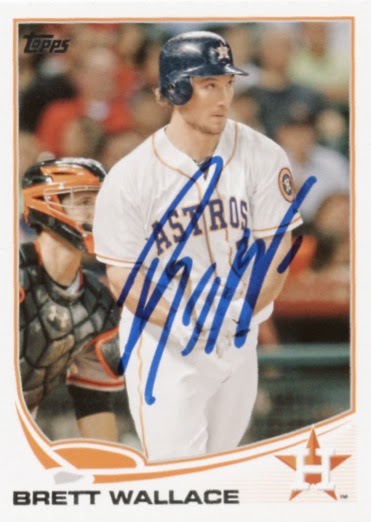 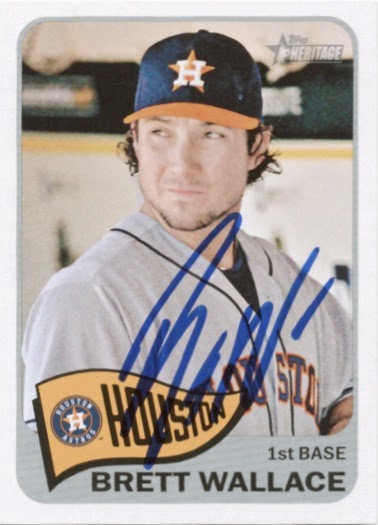 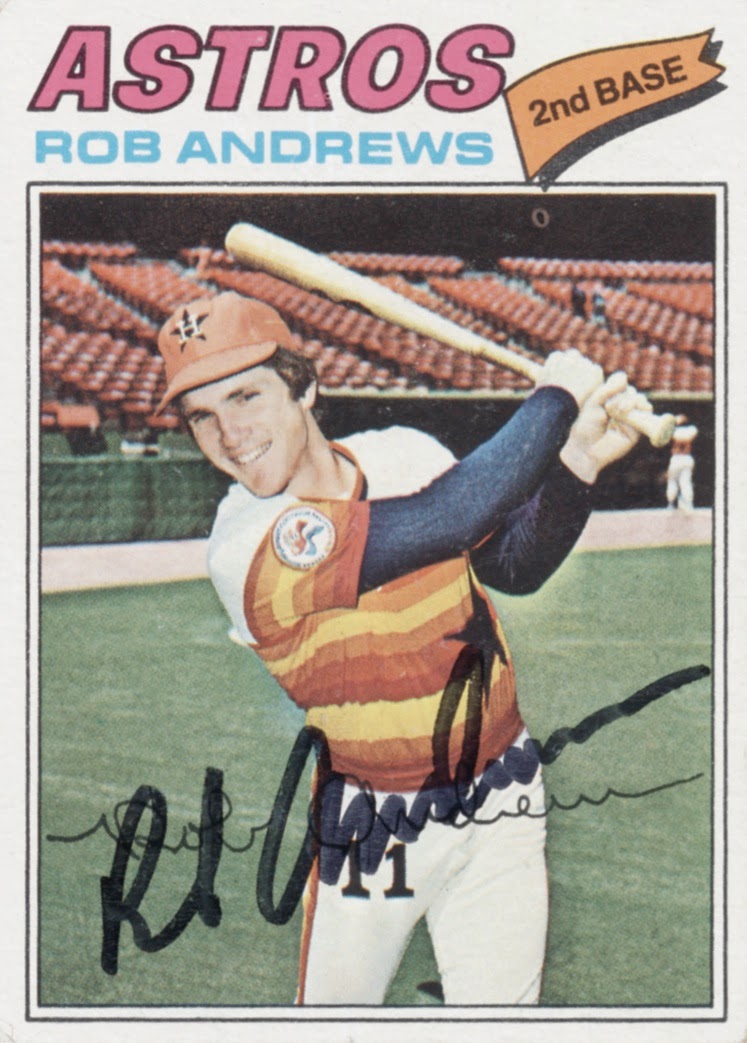 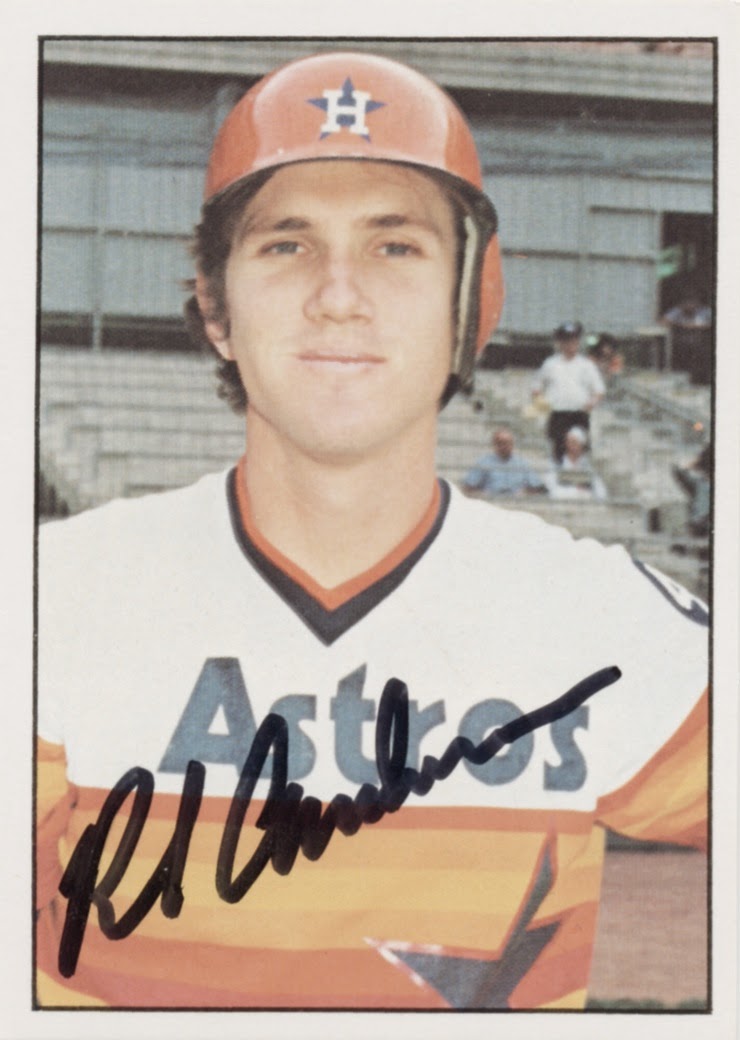 Rob Andrews spent two brief seasons with the club in the mid-70s, acquired from Baltimore as a slick-fielding minor league second baseman with a bright future. Well, hitting .249 in his two seasons didn’t help him stay with the club, and the Astros flipped him to the Giants in 1977. He does have the distinction of hitting safely in his first five games, and the deal with the Orioles also netted a key piece for the Astros future, Enos Cabell. I wrote to Rob at the end of April, and the reply came in just eight days. 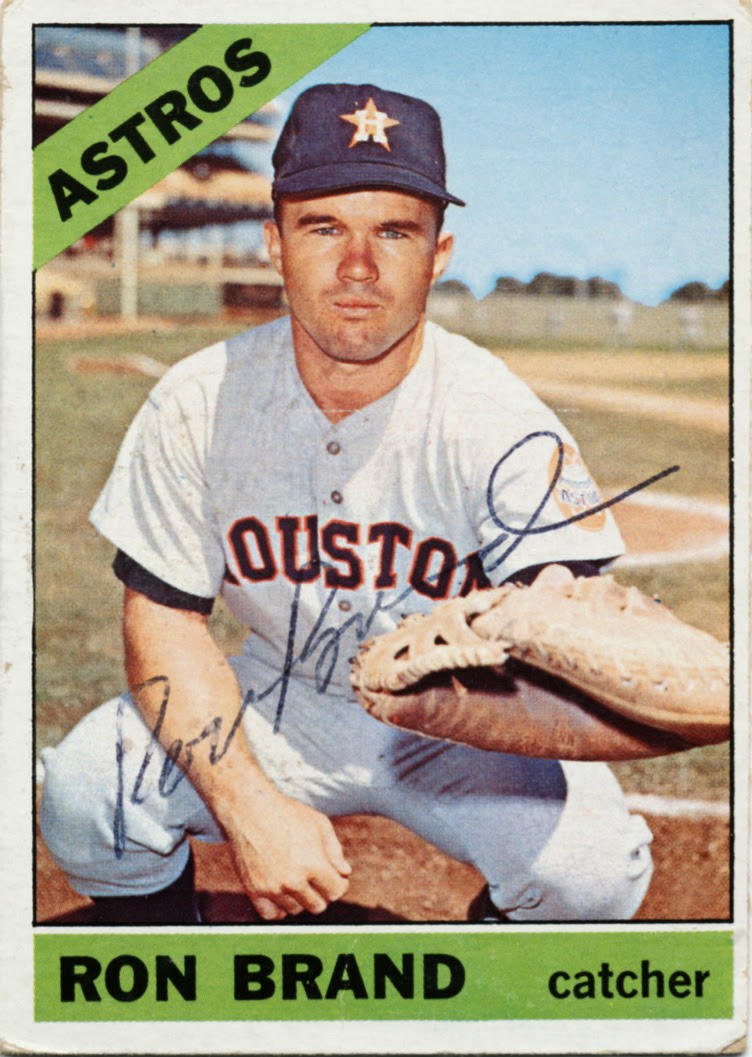 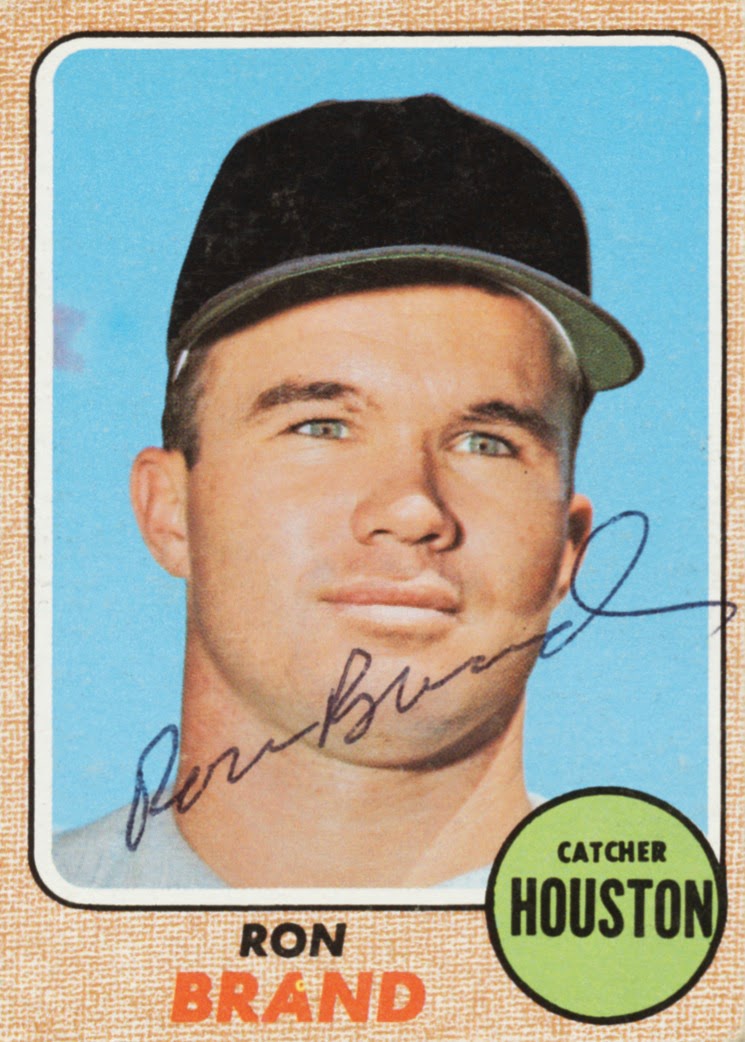 Phew! I told you this was a long post. The last and latest entry into my Astro-graphs files is former catcher Ron Brand. I was actually hoping to get Brand’s autograph at the first game I went to this season, as he was one of the six original Astros (note: Astros and not Colt .45s) that they honored before the ballgame. Unfortunately, we missed the cutoff for the line by about five minutes.
So instead, I sat down and wrote Brand a letter a few days later, and got back these two cards just twelve days later. Brand came up and won the starting catching job from John Bateman in 1965, but they spent the next several seasons alternating with one another – even when the duo was picked up by Montreal in the expansion draft.
All told, I’m now sitting at 158 autographs from different players in a Houston uniform, though Brand was number 157. I’ve got one more eBay purchase to show off in a future post.
Alright, well that’s enough from me for today. Enjoy your weekend.
– Bru

0 Replies to “Astro-graphs TTM Report: A Heap of Updates”