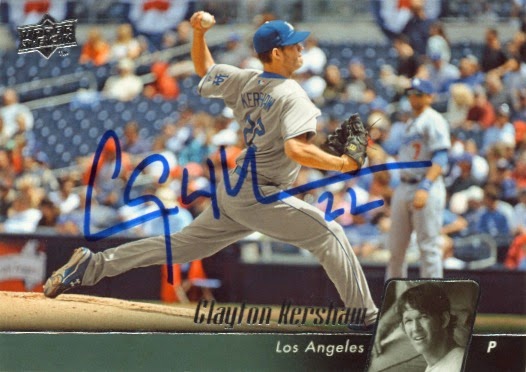 I’m in the works of putting together a massive Astros autograph update, as I’ve had quite a few additions over the past couple months.

Those aren’t the only successes I’ve had, however, and as I’ve been condensing several separate posts into one longer Astros entry, well, this one is obviously not like the others.

I sent this 2010 Upper Deck to Kershaw right before the playoffs last fall. I had already seen a wave of Kershaw returns roll through in February, so I was starting to give up hope that I’d see this one when it arrived in early March.

It’s always fun to discover a return in my mailbox and open it up, not knowing from whom it is coming. It’s especially cool when one of the big name, “take a chance” returns finds its way back to me. All told, it was out in the mail for 163 days.
What a fantastic success! I picked a nice horizontal shot in hopes of getting a big signature out of it, and I think it looks great. Now that I’ve gotten a good return, I may try sending a nicer card. Hmm… now what to send?
Until next time,
– Bru