by MarcPosted onJune 16, 2015July 14, 2019
I opened the mail yesterday and discovered a creased #10 SASE staring back at me. That meant an autograph request that I’d sent sometime last year had made its way back through the mail. I switched over to smaller 6 3/4 envelopes for my SASEs sometime near the end of the season last year.
Enough boring mail talk, though. Check out these beauties that were inside! 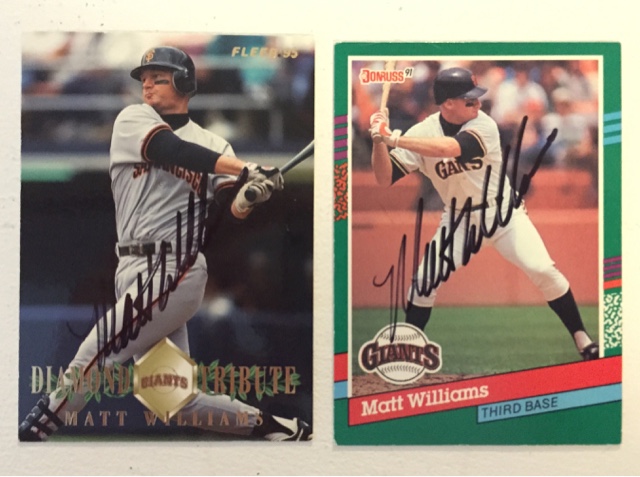 I was super excited about these Matt Williams signatures, which had been outstanding for a total of 331 days before they returned to me. Matt was kind enough to sign two of the four cards I sent (I got a shade ambitious on this one), including that sweet ’95 Fleer Diamond Tribute highlighting the massive 1994 season he was putting together before the strike hit. I only wish he’d picked the ’89 Score rookie I sent instead of the ’91 Donruss, but that’s my fault for giving him too many options. It’s still fantastic! This return (as the post title indicates) is the longest return I’ve had since I started writing TTM requests once again back in January 2014.

Several of you have said very nice things after the break-in. Thanks for all the support. We finally got a security system installed, as well as some security doors at the two entrances. I’m still trying to figure out what’s gone in cardboard terms. I did happen upon the small box of oversized Astros stuffs that I thought had disappeared, though, so that was a wonderful discovery.

Here’s hoping I can get some more updates done in the near future.