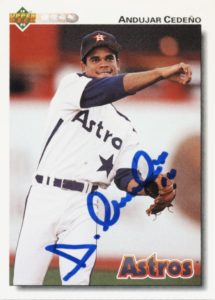 Not a whole lot to say tonight. I’ve been cramming for an exam on Tuesday in Organizational Behavior and Leadership after crushing a paper and some other classwork to wrap up my Ethics course.

Time to dump another post out of the old drafts folder. I finally found a nice looking, reasonably priced Andujar Cedeño autograph floating around on eBay. I picked this one up about two months ago for under a fiver.

Cedeño was supposed to be the shortstop of the future, but aside from a nice 1993 season, he didn’t hit much for the Astros. in 1991 he was Baseball America’s #2 overall prospect. Number One was Todd Van Poppel. Jeff Bagwell was ranked 32nd.

Cedeño passed away in an unfortunate automobile accident while driving home from a Dominican League game in October 2000. His car was struck by a truck and he was killed instantly.

Cedeño also hit for the cycle (a completely ridiculous statistic) in 1992, and was involved in one of the largest trades that I can remember, when the Astros and Padres swapped twelve players, and we lost Caminiti and Finley in the deal for Derek “Operation Shutdown” Bell (coming off a fourth place finish in the NL batting race) and Doug Brocail, among other pieces. Que Terrible.

Ok, off to bed. Until next time.