by MarcPosted onAugust 5, 2015July 14, 2019
Hey there fellow collector! Are you working on a junk wax set? Perhaps you have some holes in your team collection? Well, have I got some free junk wax for you!
Recently – well, a few months ago, I haven’t gotten around to posting about it until now – the father of a former coworker of mine from a coffee shop I worked at passed away. David and I are still pals – he’s a semi-genius of several levels – rap history, literature, philosophy, socialism, basketball strategy, politics, etc. All around, he’s a swell dude. When he went home for the funeral, he dug up his old card collection, and told me he wanted to give it all to me. I was a bit stunned, because other than him knowing I collected cards, it came completely out of nowhere.
Most of it the collection was junk wax, but I landed some really neat things that I’ll show off on the blog later, and a complete ’81 Fleer set, one that I had been pondering putting together. I also persuaded him to hang on to some cool items, like the 1988 Dodgers autographed ball he got from Norm Larker, who had given him baseball lessons as a kid in LA, or the Ken Griffey, Jr. signed ball, and *sigh* several signed Astros items including a Don Wilson photo. You can’t just take someone’s memories after all.
Yes, there was a small stack of nice vintage in the box, and even after I informed him what it was he insisted I keep it.
But the junk wax! Oh, the glorious junk wax. I got a really nice head start on a Diamond Kings set. There was a complete and binder-ed ’89 Upper Deck set, and box sets from 1990 Donruss, 1990 Upper Deck, 1991 Upper Deck, and a big chunk of the ’92 Upper Deck set. 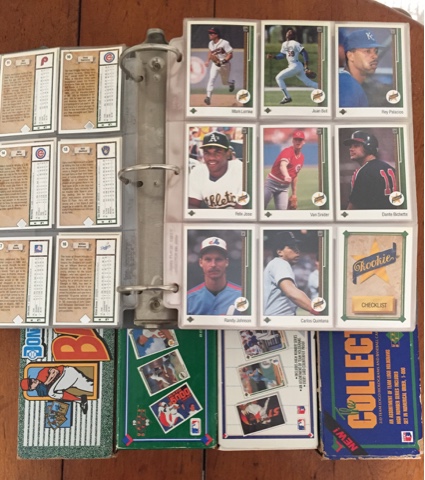 See! That ’89 UD box on the right is full of 1992 cards. Now, not everything is a full set anymore, and I haven’t combed through them yet for keepers, although I believe I already pulled the Astros I need. But there are also a lot of dupes, presumably from packs he bought.
So, if you need anything from the following sets, please let me know, and I’ll see what of it I can find for you. Oh, and before you ask, no, the Randy Johnson and ’89 Griffey are not available – they’re tucked nicely into my collection, finally.
Available cards
So send me your wants! It’d make my wife really happy if I could get some of these out of the house, so I won’t even ask for anything in return. Although, if you want to hit up my ‘Stros list…
– Bru