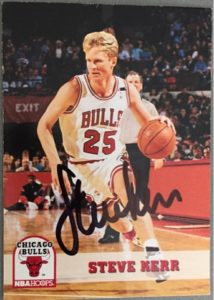 We’re back from our nine-day trip, which included Cooperstown, and we survived intact. I have a bunch of fun photos to show off, but haven’t had the time to start putting them together yet. I came home to a couple more trade packages, another eBay win, and some very happy pets.
There are a boatload of drafts to get through at this point, so let’s get an easy one out of the way. This showed up a couple weeks before we took off, nearly a year after I sent it. I don’t tend to write to many non-baseball players, but when Steve Kerr was named head coach of the Warriors last summer I decided to take a flyer on one of the guys I enjoyed watching play back when I paid attention to basketball in elementary school.
After 356 days, I got back one of the two cards I’d sent Steve’s way. I guess he’s been catching up on fan mail now that the championship is under their belt.
This long return toppled my recent Matt Williams return for the longest since I resumed writing to players last year.
I also decided that post-vacation was a good time to hit the reset button on my blog reader. I haven’t had much time to keep up with everyone anyway, so why kill myself trying to catch up on a month’s worth of posts?
Alright, time to watch the Astros beat the pants of the Rangers and whip up a few entries. Hope all is well with you guys!
– Bru