‘Tis the eve of the Hall of Fame announcements, and my boyhood hero Jeff Bagwell is currently resting at 79.5% of the 171 public ballots on @NotMrTibbs HOF ballot tracker. That’s good for 136 votes so far. Now, I’m not going to get too excited, as that means he still needs to be on approximately 72.4% of the 280 or so remaining ballots, and that’s a lot of opportunity for his percentage to fall. However, he’s made fantastic progress this year, already gaining 22 votes among the public ballots, including all of the 8 new voters so far. So maybe he squeaks in this year, but if not 2017 looks pretty good too.

So what better day to kick off my new series of posts detailing my extensive Jeff Bagwell collection? I decided to start off with the most recent addition to the Bagwell binders, a pull from a Topps Chrome Update pack inside a blaster I bought last month. 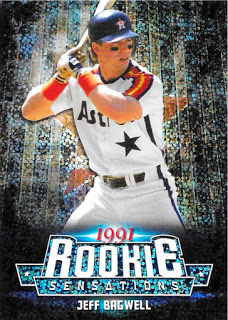 The card: 2015 Topps Update Rookie Sensations Chrome #RSC-13
This shiny piece of Bagwell glory is a Chrome’d-out parallel of the Rookie Sensations insert set found in 2015 Update. Featuring a very young Jeff, the back regales some stats from his fabulous 1991 rookie season, which garnered him 23 out of 24 first place votes for ROY. The lone first place vote that went to someone else was cast for Orlando Merced. Bagwell’s 1991 season was worth 4.8 bWAR, more than two full wins above the closest competition. Merced had 2.6, while 8th place finisher Mike Stanton was worth 2.7 wins.
This one turns nicely in hand, with the faux-texture and the chrome combining to catch the light. In typical recent Topps insert fashion, it has a fairly bland back, featuring a run-on sentence and not much else.
Alright, here’s to many, many more entries to come in the Bagwell Bonanza! I’m at about 870 different cards of Jeff at the moment, not to mention other miscellaneous memorabilia that will grace this series. I hope you enjoy it.