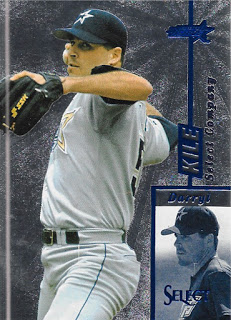 A couple weeks ago I posted about a bunch of sets that I’m in the process of breaking, in hopes of lightening some of my collection. I was chasing a bunch of junk wax sets that I determined were mostly just filler – ideas that seemed fun to pursue as I eased back into collecting some two and a half years ago, but now seem less purposeful and more like clutter.

Fortunately, several of you have taken me up on the offer to take some cards off my hands as I whittle down and re-focus. One such blogger who contacted me is JP of Cards My Mom Didn’t Throw Out, who’s new to this blogging game. Do you need someone to take some Diamondbacks, Finleys, and Goldschmidts off your hands? JP is the guy.

So I put together a pile, which included a healthy Steve Finley stack and a few Gonzos, and dashed a package off to him. In return, I found a fat PWE in my mailbox a few days ago. JP had some really nice Astros in store for me, including this 1997 Darryl Kile “Select Company” parallel. 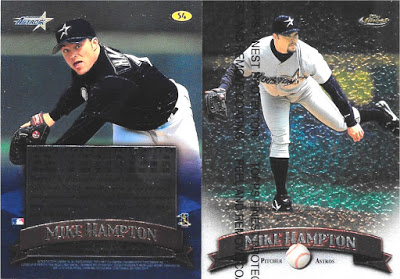 JP managed to just about eliminate the 1998 Finest base set from my wantlist, short of Craig Biggio and Derek Bell. He sent along two Mike Hamptons, one of which is not like the other. If you’re not familiar, Topps went a little crazy with 1998 Finest, to the extent that I may just have to pick up a box to bust. 1998 was the year of Mystery’s Finests (with the black protectors), alternate “no protector” cards, “no protector” refractor cards, no border Mystery’s Finests, and so on. The Hampton on the left is one of the “No Protector” cards that were inserted into packs, and features a Chrome-y back.

JP also added this mid-90’s awesomeness. 1994 Studio was pretty fun, with the locker shots for backgrounds. But 1995 Leaf – man, that set is where it’s at! It’s definitely among my top 90’s sets, along with 1998 Stadium Club and 1995 E-Motion, and one that I would consider actually building. That’s Phil Plantier, by the way. Speaking of 1998 Stadium Club, I need to make a wantlist for that one. I busted a box of each series last year (Odds and Evens) and am fairly close to a full set. 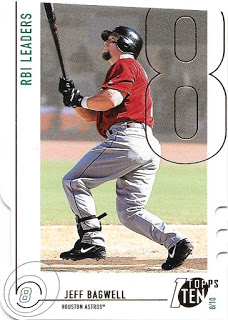 Of course, JP didn’t neglect my favorite player either. He slipped in a couple of cool Bagwell cards into the PWE, including a “no protector” parallel from 1998 Finest, and this rad die-cut parallel from 2002 Topps Ten.
Thanks for the cards JP!

0 Replies to “Cards My Mom Can’t Throw Out”