I haven’t posted in over four months. The weird thing is that I actually would have had more time in the summer, I suppose. Part of it was due to having my laptop stolen. The rest, I’m not entirely certain as to why. Some schoolwork, some work work, etc.

I’m busier than ever right now. I guess posting is a little stress relief, or maybeI just need to reconnect with the outside world a little bit. I’m in my final semester of my MBA program – I got cleared to graduate in December, and I just have to pass these last three classes.

I haven’t picked up many cards lately, though I’ve bought a little of each retail set from 2016. I scored a few nice pulls that I’ll try and show off later. What I have done, though, is maintain a pretty steady TTM level, and that’s lead to a bunch of returns, including this one that was out for nearly 14 months. 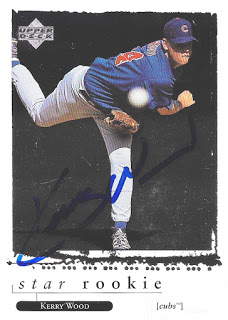 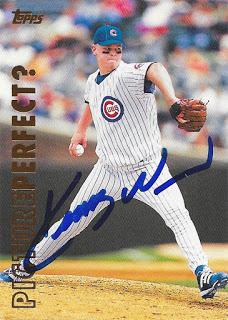 Now that 1998 Upper Deck and all its shiny doesn’t scan very well, but it’s pretty damn nice. It’s my second signed Wood RC, after the one I sent him just days after he struck out 20 of my beloved Astros just weeks into his debut in 1998. These were sent via the Cubs in August last year, after I saw a few returns reported. 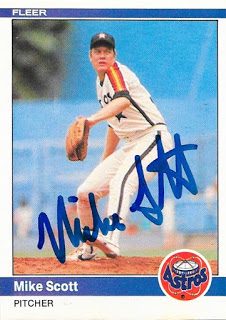 In my time away from the blog, I’ve made some really nice progress on my Astrographs project. Provided that the totals I have on my recreated spreadsheet are correct, I’m up to 323 autographs of players/coaches in a Houston uniform, and another 40 in other uniforms. I need to take some time to update the page I have for it here, but that full redesign I’d like to do will probably have to wait several more months. The Astros held their Legends Weekend in early August, and I hit up the pregame signing on August 6th that featured nearly two dozen former players, including several from the 1986 team. The big score of the day for me was Mike Scott, whose no-hitter clinched a playoff bid for the ‘Stros that year. I’ll work up a full post on that one soon, hopefully. I also added Le Grand Orange, Rusty Staub, via a private signing recently. It was nice to check those two team stars off my list.
The TTM train has been rolling along steadily, and I have so many returns that I need to post. Maybe I can try to throw a few a week up, but who really knows what sort of time I will have between now and graduation. 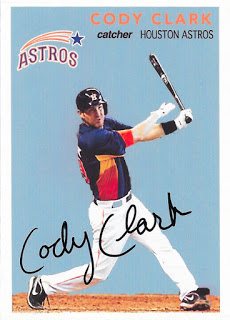 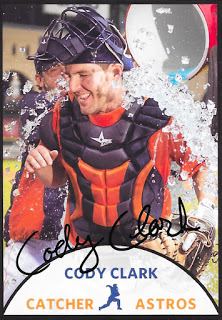 Here’s my most recent return, which came in today: long-term minor leaguer, short-term Astro, and current Royals bullpen coach Cody Clark. After a decade in the minors and Indy ball, Cody got a callup in late 2013 when the Astros hit a rash of catching injuries, including a surprise fastball to Max Stassi’s jaw. All told, Clark played in 16 games, collecting 4 hits. These are two customs I made (I sent him an extra pair), based off the 1954 Wilson Franks series and the 1979 TCMA Japanese set. The “Wilson Franks” features Clark’s first hit, which took an agonizing 11 games for him to realize, and the “TCMA” features the subsequent postgame bath he received after the team won. Clark had gone 0-for-25 in 27 plate appearances before hitting a single off Jason Vargas in the 5th inning on September 13th.

I fell in love with the Wilson Franks layout thanks to a Mark Hoyle post I spotted on Twitter, and it has subsequently become my default go-to for Astros customs now. It’s nice to have an official style for the series. I replaced the hot dogs with the team logo – the 60’s shooting star version is my favorite, and I use it with older uniforms and the current ones, though I’ve stuck with correct logos for the Eighties through the horrific brick red and pinstripe days of the Oughts. I matched the fonts as close as I could, and got rid of the facsimile signatures, as I’m interested in using these to collect the real deal. I’m interested in trying to develop a version of the back that I can use for my customs on a regular basis as well, so maybe I’ll get to that in, I don’t know, January?

Finally, I’ll show off another recent autograph addition. I got this one when the Cubs came to town in September. 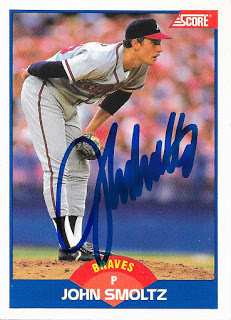 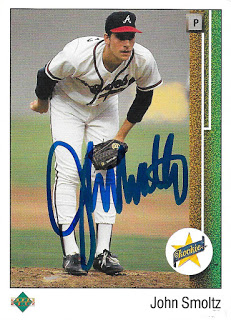 That’s probably not who you were expecting to see, huh? Fox had brought their crew in for the Saturday day game, and I decided to head over and try to catch some Cubs at the team hotel in downtown. I was hoping for Dexter Fowler (for my Astros collection) and maybe Maddon and some of the young Cubbies, so I loaded up some cards and threw in a few of the Fox & Cubs broadcasters just in case. To my dismay, I was at the wrong hotel – for the Cubs, that is. They stayed outside of downtown, but the broadcasters and sportswriters were all staying just blocks from the ballpark. Smoltz was very nice to the three of us who were waiting, and I was very grateful to come away with a pair of signed RCs.

I’m a doofus, though, and didn’t realize that some of the Astros call-ups were put up at the hotel as well. I hadn’t brought any Astros cards with me, and missed out on Alex Bregman. Whoops.