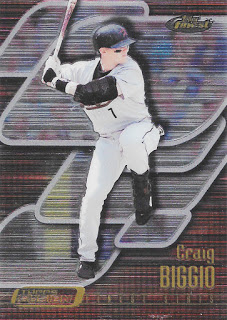 I’m furiously trying to pound out a bunch of trade posts in order to catch back up on the ol’ blog. If you’ve sent along cards in the past few months, don’t worry – I’ll have a post up soon! If, for some reason I miss it, feel free to yell at me in the comments sometime.

This here turned out to be a lovely small swap with another TCDB member, MMehler30 – a Rangers fan for whom I happily packed up a stack of our cross-state rivals. There were only two cards coming back my way, but I’m down for a lopsided trade anytime, especially when the quality was this nice!

First up in the envelope was this Craig Biggio, a shiny delight that I’d never seen before. While it says Finest in the upper corner, this card is actually from the hybrid 2001 Topps Fusion set. I don’t know what it was about card companies doing amalgamation sets in the early 00’s (Donruss Fan Club/Best of Fan Club, anyone?), but hey, it’s a great looking card and another Bidge for the binder.

The big card in the trade, though, was this super-sweet Futures Game relic of Chris Burke from 2004 Bowman. Burke, of course, hit one of the most epic homers in Astros history with his 18th inning blast that ended the 2005 NLDS.

You know what, let’s watch that one!

Ah, a dinger that never gets old. Thanks again for the cards!

0 Replies to “Trading at the Database: New Goodies from Mike”