Aug 27, 1 pm: Storm update – we had an absolute ton of rain last night. A map of the many various rain gages across the Houston area is here on the right – the numbers listed are the total rainfall in the past 24 hours. Yes, there are places that saw as much as 20 inches or more over the past day.

Harvey has thrown us beyond the 500 year flood marker in some spots, and this is going to be the new benchmark storm for the region. We’re due for even more rain in the next few days, with the storm center due to circle back south before tracking straight up through Houston. Hopefully, the worst of the rain is over and there will be enough abatement throughout the days that we can handle the extra rain over the nights.

Here at RTA HQ, we’ve been fortunate. We still have power, and while we’ve seen around 15 inches by us, our block and the few blocks nearby drain swiftly once the heavy bands of rain subside. At a sustained rate of about 2 inches per hour (heavy thunderstorm), the storm drains here in Houston can’t keep up, and that’s when we see street flooding. Well, we saw rates of 3-4 inches per hour, even 5-6 inches in some areas. That’s led to the emergency situation you’ve seen on TV. When the bands let up, we still have constant rainfall, but the drains are able to start allowing more water out. Fortunately, as I said, the several blocks around us drain extremely well and quickly. Other areas not far from us have not been as lucky. Commishbob reported a couple hours ago that he is ok. 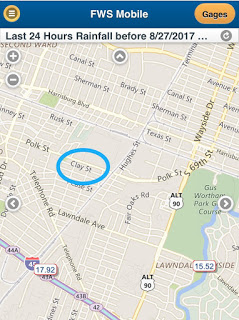 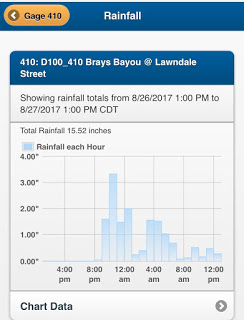 If you’ve sent a trade package here, you might know that we live on Clay Street now. We’re pretty close to where it says the street name on the map. Those are the two gages near us – I selected the one at Lawndale and Brays Bayou – which is 5 feet over its banks now – as it’s probably the most accurate. It’s a gage from the Harris Country Flood Control District, reporting 15.52 inches of rain across the past 24 hours (the 17.92 below us is a Texas Dept. of Transportation gage, but I think they’re more influenced by some of the infrastructure as they’re almost all along the highways.
As I said, the street’s clear at the moment, and other than a dog who doesn’t like to venture out in the rain, we’re all fine. Lil Bru sleeps through thunderstorms like a champ, apparently! 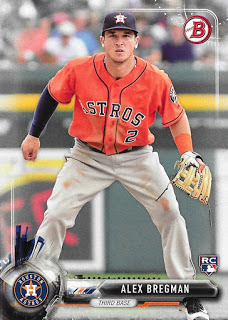 Alright, time to write about some cards – I had been hunting down a few things on eBay, and came across a big lot of Bregmans. You know, one of those big packages where someone’s thrown together a whole bunch of base cards and inserts, etc?

Well, this one was too good to pass up – it was going to fill a bunch of 2017 holes that I’m sure I could have sourced through trades, but there was a little something extra that made me pull the trigger.

First up is a 2017 Bowman base card. Fairly nice. No real complaints, other than the odd fractures coming out of the lower left ball. I’m fine with this design.

There were other base cards from Flagship, Opening Day, Heritage (w/ Gurriel) and GQ, but I’m going to show off the inserts that I landed. 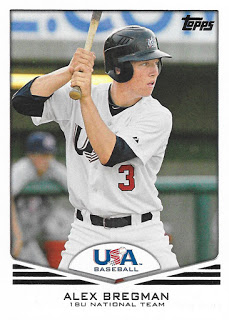 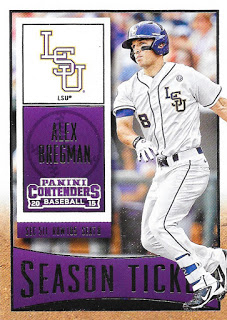 There were some pre-Stros Bregmans in the lot! Look at that baby playing for Team USA. 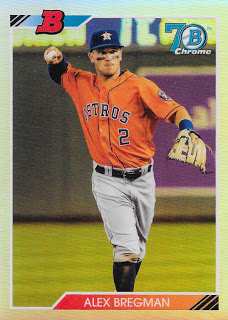 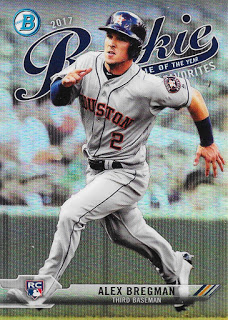 I got some shiny inserts from this year’s Bowman Chrome. I really like that they pulled out the 1997 “Rookie of the Year Favorites” insert out for a rehash. 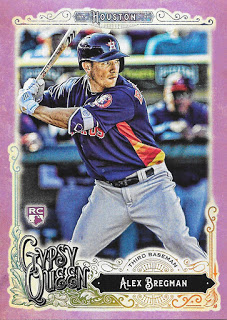 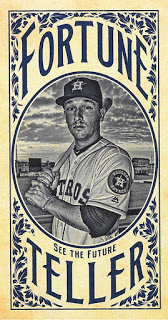 There were Gypsy Queen inserts as well, with a purple border and the Fortune Teller making their way to my collection. 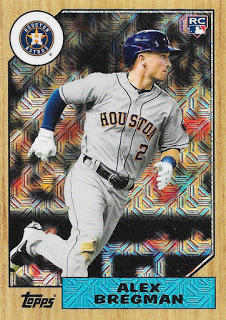 This is one of those fancy Silver Pack cards that was inserted into boxes of Series 2. It’s shiny! And while it might seem like the rarity that made me pull the trigger on the lot, that distinction is actually held by our next card…

Woohoo! A certified Bregman auto from Gypsy Queen! Given the number of cards in the lot and this baby, I put in a best offer and after a little back and forth, the seller and I found ourselves at a deal. I’m particularly excited because this serves as my Bregman signature for the Astro-graphs project, at least until I possibly manage to get a card signed in person.

0 Replies to “The Hunker Down Chronicles, Part 5: A Bucket of Rain and a Bevy of Bregmans”