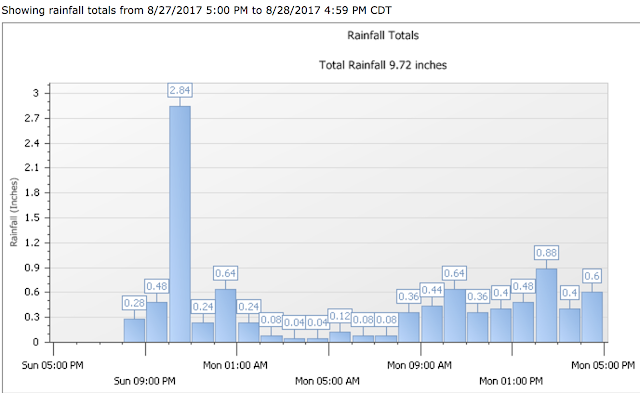 And here’s, well, the past week, though really it’s just the past 5 days we’re looking at here: 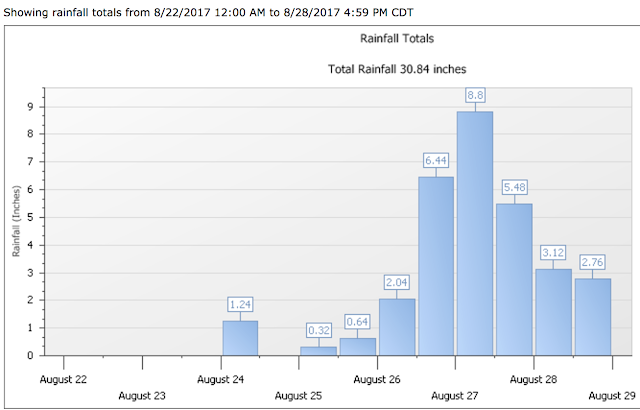 Yes, we’ve gotten nearly 31 inches of rain altogether. By the time I finish writing this post, we’ll probably have breached that. Again, RTA HQ is still high and dry. My parents are in Sugar Land, where their neighborhood is in part of the voluntary evacuation zone as the authorities expect the Brazos River to continue to rise until cresting Tuesday evening at 59 feet. Mainly because at that point, it can’t really get any higher, it will just spill out over the watershed. The next neighborhood over is part of the significant mandatory evacuation zone in Fort Bend county, but my folks are just upstream and while they may get stuck in their neighborhood for several days, it looks like they should be fairly fine. It’s possible they see a small amount of water in the house, but fingers are crossed that we won’t have any problems. They’re well supplied, so they’re planning to just wait it out.
The constant rain has made us a little stir crazy here. The poor dumb mutt refuses to go out into the rain to go to the bathroom, so he’s just been sleeping the entire day. I wish it would clear for a good 15 minutes even, so that I could get him out. I’d like to go help, or try to scrounge up some more groceries, or do anything, but with enough uncertainty about clear roads and the never ending rain, it’s just not feasible. If the baby weren’t here, Mel and I would probably have made our way over to the nearby George R. Brown Convention Center to volunteer – it’s only about a five minute drive normally and it’s being used as a massive shelter at the moment.
Enough frustration. Let’s find some positivity, shall we? While I’ve been pretty bad at updating the blog prior to this storm, I haven’t let down my torrent of TTM requests. Now seems like a pretty good time to start catching up. 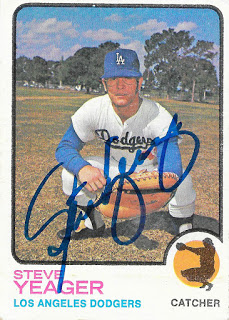 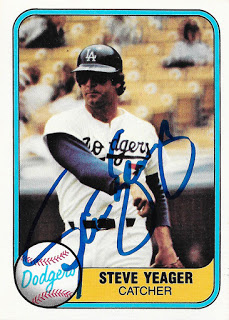 Steve Yeager: 2/2.
Sent: 6/17, Received: 7/13, total time: 26 days.
I’d seen a Yeager success or three reported at SCN and figured, what the heck, why not? I knew he was in the ’81 Fleer set, (which I’m casually working on getting as much as I can signed) and scooped the ’73 RC when I came across it while digging on an LCS trip. These were sent c/o the Dodgers, where Yeager is a coach. 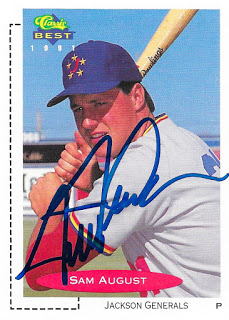 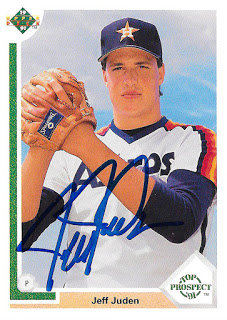 Sam August, er, Jeff Juden: 4/4.
Sent: 2/7, Received 7/18, total time: 161 days.
At the time, Juden was one of the guys I needed for my Astros all-time roster autographs. I’d picked up a signed card in a swap while these were out, but I was really happy to see these come back. I remember meeting Juden as a little tike back in 1992 at the Astros FanFest. I’m glad he signed that “Sam August” card – it’s Juden in a batting pose (odd part number one, right?). Classic didn’t do so hot with the 1991 Generals roster – August’s card features Juden, Juden’s card features Shane Reynolds, Reynold’s card features Orlando Miller (no idea how they messed that up), and Miller’s card features the real Sam August. 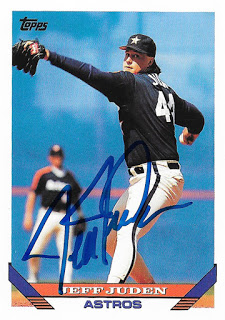 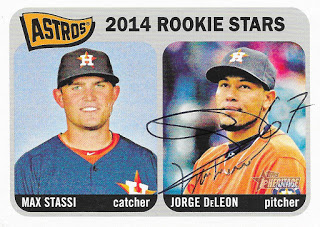 Jorge De Leon: 1/1
Sent: 7/17, Received 7/24, 7 days.
Another random reliever from the roster down! DeLeon is pitching with the Gary Southshore RailCats this year, so I sent this one c/o the team. He must have had a translator that helped with answering the questions I asked. While his stats with Houston weren’t impressive, he did something amazing when he came into a game against Cincinnati on Sept 18, 2013 in the 12th inning, getting three outs on just three pitches. 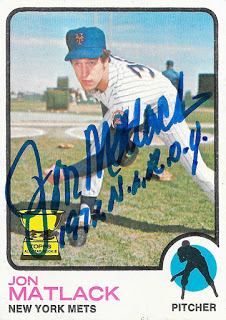 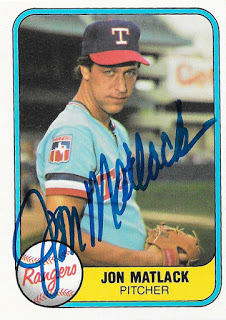 Jon Matlack: 2/2
Sent: 7/17, Received: 7/24 , 7 days.
I’ve been slowly adding some of the big annual award winners to my list, so when a Matlack second year card dropped into my lap, I filed it in my “to write” box. After it sitting there for a while, I finally dug it out and the ’81 Fleer and dropped them to him. He was very kind, adding the 1972 NL ROY inscription I requested. 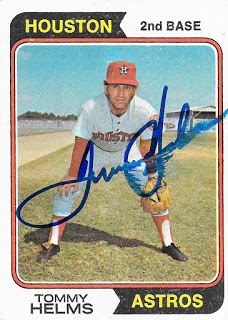 Tommy Helms: 1/1
Sent: 7/17, Received 7/25, 8 days.
Helms has been a frustrating one for me – he’s got a decent reported success rate, but this was my third attempt and first response from him – and it smudged, to boot! Oh well. I may try once more. Helms also checks off a ROY slot on my list, as he won the 1968 NL ROY with Cincinnati. 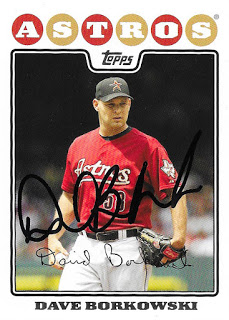 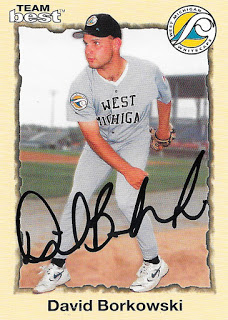 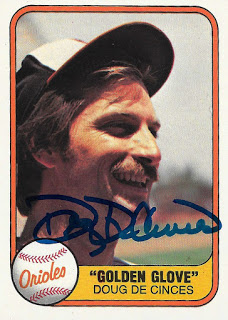 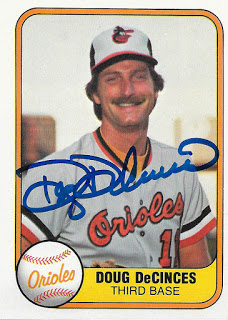 Doug DeCinces: 2/2
Sent: 7/17, Received 7/31, 14 days.
DeCinces was a fine third baseman for the Orioles and Angels. I’m not sure why he got a “Golden Glove” designation in the 1981 Fleer set, given that he, uh, didn’t win one. He did finish third in the 1982 AL MVP voting and won a Silver Slugger that year, however. These two checked off a couple more signed cards from the ’81 Fleer list. At the moment I’ve got somewhere around 35 cards from the set signed.

More posts (and rain) to come,