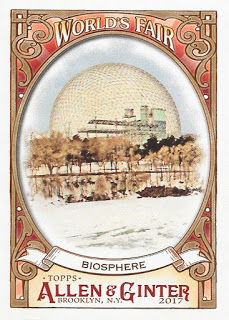 Greetings, one and all, and welcome to the fabulous Hunker Down Chronicles, 2017 edition! As you should well know by now, I reside in the glorious quasi-swamptown of Houston, Texas: home to such glories as my beloved Astros and the Astrodome, the invention of air conditioning, NASA, some incredible museums, a whole lot of oil money, and much, much more.

Well, this week, it’s also going to be home to a mighty f*ckload of rain, as Hurricane Harvey has decided to make landfall about 150 miles south of us, barreling into Corpus Christi (birthplace of the phenomenal Whataburger and home to the Astros AA club, the Hooks) and the surrounding region, making landfall as a nice little Category 4 hurricane. This puppy moved in with the lowest recorded barometric pressure in the history of Texas storms, meaning that it is going absolutely nowhere. Seriously, it’s going to just sit in the region for the next several days, slowly making its way into/past Houston and then who knows where (no seriously, they don’t know where yet). Any hurricane coming through the Houston area has been cause to “hunker down” for some time now, a term that we really and truly embraced during Ike 9 years ago.

So we’ve prepped, and we’re stocked on bottled water, non-perishables, diapers, etc. We’ve got a gas stove, so even without power we’d be able to cook plenty. We’ve got our flashlights, lanterns, batteries, devices charged, books to read, etc. Now, we hunker. We’re due for upwards of 15 inches of rain here in the lighter portions, with the more heavily dosed areas getting upwards of 25 inches. There are even some forecasts that are saying it’ll be more than that, but those are outlier situations.
Since we aren’t going anywhere for a while, I thought I’d take the opportunity to get some blogging done. Hence, the Hunker Down Chronicles. A few weeks back I posted about some Series 2 and Stadium Club I bought. I also grabbed a blaster of Allen & Ginter at the time, though it’s just been sitting in my drafts until now. Well, the Hunker Down Chronicles calls for an attempt to unload as much of my previously unposted crap as possible, so let’s have at it! What better card to start off with than ol’ Buckminster Fuller’s biosphere from the Montreal World’s Fair? If you’re not familiar with Fuller, he was quite amazing, and I highly recommend listening to this 99% Invisible episode about some of his work. 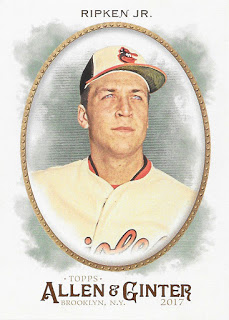 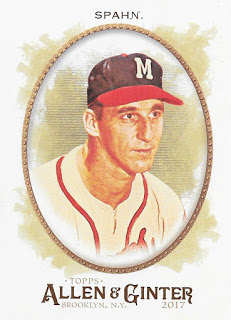 Allen & Ginter base, 2017 edition. It’s fine and dandy. I’m very much okay with this, though it leaves little variation for the types of poses that we’ll see. I picked out a pair that are keepers, but I’m going to put most of this blaster on the trading block. 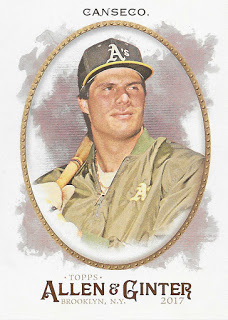 This guy, though – not so much. Can we please stop putting Canseco in new products? It’s not even that I hate the guy, it’s just – he’s still in every new set it seems like (even if his Archives card features a shot of his brother, Ozzie). Topps needs to learn how to rotate that retired player roster a bit more. 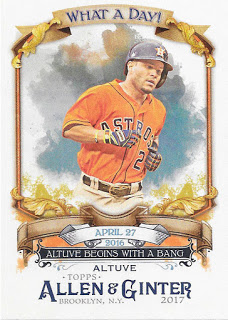 I wound up with several nice cards from the massive “What A Day!” insert set. I dig the gilded-leaf frame on these, they’ve got a nice layout. This Altuve was my lone Astros card from the entire blaster. I know there are more Astros cards than a few years back when I started collecting again, but it seems like they often are underrepresented in the packs I open.

IT’S A HURRICANE OF MINIS! I had not been following what the inserts would be, so some of these really caught me off guard. Let’s see, we’ve got our standard parallel versions, Hulk Hogan’s daughter, some ponies, a golfer, a guy who drinks beer while running, books, and, uh, “Dudes?” Oh, and that weird blank space in the middle – it’s not blank, it’s one of the glow-in-the-dark constellation minis (Ursa Minor). Beltre, Hogan, Golfer Guy, and Beer Guy are all A&G backs. I’m hanging onto the Machado, Villar, Beltre, Sanchez (black), and Judge/Matz/Longoria (gold). Everything else is available. 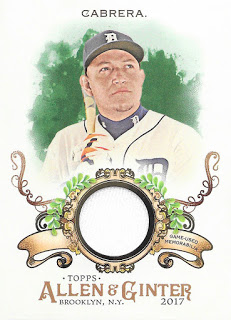 Ok, this was supposed to be a quick post, despite the long-winded intro. So let’s cap it off with my big prize from the package – a relic! Not just any relic either, mind you. Oh sure, it’s just a plain white swatch, but it’s from Miggy! You know, the guy who’s got the second-best batting average in the league over the last five years? Second only to his friend and fellow countryman, Jose Altuve that is!

Alright, the heavy rain is supposed to start rolling in here in the next few hours and settling in for good. I’m going to turn in for the night. Stay tuned for the next dispatch!

0 Replies to “The Hunker Down Chronicles: Quick Thoughts on 2017 A&G”