by MarcPosted onNovember 24, 2017July 9, 2019
I haven’t been buying much cardboard lately – the occasional stray pack at my “local” Target and a couple of card shows this year have accounted for the grand majority of my purchasing in 2017. Part of it has been budgetary restraint, part of it is a result of just feeling simultaneously bored with most of the year’s output and overwhelmed with the sheer amount of sets Topps is trying to roll out this year. Every now and then, however, those saved searches on eBay call out to me, and something causes me to bite. Such was the case with the following beautiful piece of vintage goodness. 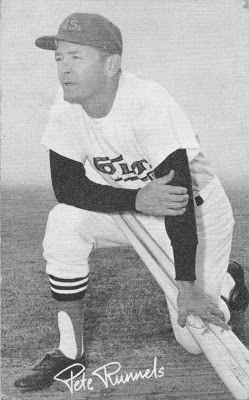 That, my friends, is a 1963 Exhibit Pete Runnels that showed up in my “Houston Colt 45s” saved search sometime around a month ago. It was listed for under three bucks with another dollar or so in shipping, so it was mighty tempting from the start. But that’s not the end of the story, for this was no ordinary Exhibit.

It’s a stat back! Check out that fantastic red ink grid, complete with minor league stats! 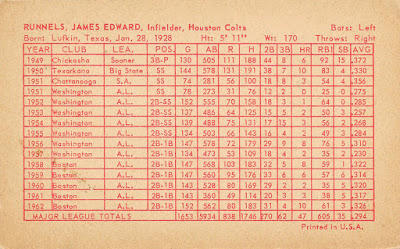 I love this for several reasons:
Since I was already in the mode to purchase (less than four bucks for a stat back?! DUH) I did the next most obvious thing and checked the seller’s other items. Combined shipping, y’all. 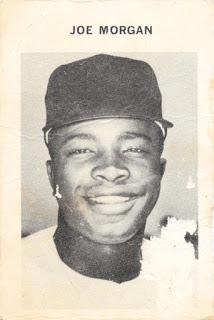 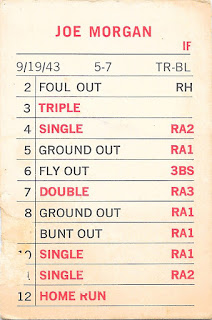 That’s where I found this beaten up beauty lying about – for a mere .29 cents! Sure, it’s not in the best of shape, but I wasn’t about to pass on this 1969 Milton Bradley Joe Morgan for less than three Roosevelts! Heck, the seller didn’t even charge me extra shipping. 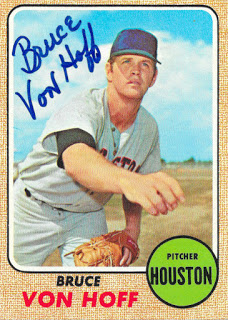 While I was cruisin’ around the ‘Bay feeling that Paypal fire heating up in my pocket, I decided to look for a few Astros autographs that aren’t attainable anymore. Several of these are rare, and well out of my price range (Don Wilson, Nellie Fox, Jim Umbricht), but many others are ones I keep tabs on and just haven’t grabbed yet.

For some reason, this Bruce Von Hoff stood out to me as the one to nab. Perhaps it was the excellent signature in bright blue Sharpie, or the fact that one seller had two JSA’d copies up for just 10 bucks a pop and I’d yet to see another Von Hoff that wasn’t in pen. Who knows? Anyhow, here’s one of the latest additions to the Astro-graphs project, safe and sound in the team binder! 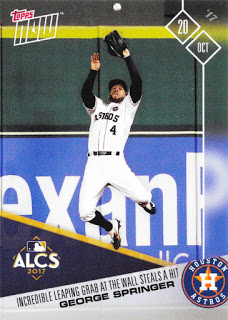 I must have pulled the trigger on those auctions on October 21st, because I know I purchased this baby on the same day. I’ve got my issues with Topps Now – price point, checklist volume, player and photo selection, and the fact that this year’s stock is the flimsy Flagship stuff, not the nice thick Stadium Club-style stock on which last year’s cards were printed.

HOWEVER, George has been one of my favorites in all of baseball since he debuted back in 2014. He was the first hint of the bright light at the end of the tunnel that we knew was there, somewhere. Side note: it came, y’all. What’s more, Springer’s insane defensive ability is one of my favorite things about him, so a card featuring such a – well, feat – would definitely pique my interest.

But the reason I had to have this card was because I was at this game. I heard the small but certain crowd of Yankees fans present in the ballpark as they gasped in awe, wonderment, and hope as Todd Frazier lifted a ball that they were certain was surefire three-run homer. I stood in the concourse of the right field Mezzanine, craning my neck over three rows of standing fans, eyeing the trajectory of the ball and somehow knowing – perhaps with sheer blind hope – that the ball wasn’t leaving the yard. I stood on my tiptoes, staring past the overhanging edge of the section where I knew Springer would magically appear; I hopped as he leapt to make the grab, and I physically felt the emotional wave of despair leaving said Bronx invaders as they collectively exhaled in defeat. It was their best shot erased, and all of the Yankees fans knew it. I screamed out in wonder. I high-fived all my fellow comrades around me. We rejoiced. 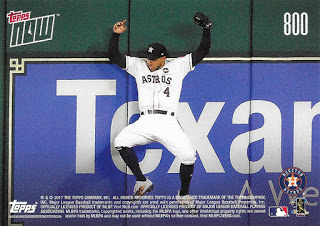 So yeah, put all that magical shit on some cardboard, and I’ll buy it. It is the only Topps Now card I purchased all year (I’ll probably spring for the WS set before too long), but I think it’s the only one I really needed.

0 Replies to “A Few Quick Pickups”