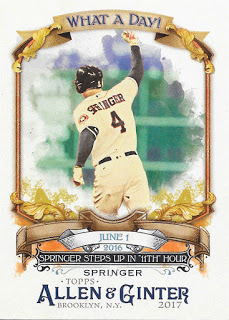 I don’t want to let this blog get away from me again – so even though I’ve got a bunch to catch up on from essentially my entire year of collecting, I need to acknowledge a quick trade that came in a few days ago, courtesy of my new pal Steven, whose handle at TCDB is parsley24.

First, a confession to make – I think this is probably the third trade Steven proposed to me. But, what with the being busy and also not having about 75% of my cards readily on hand (yes, they really are still at my parents), I had let them expire.

Thankfully, though, Steven didn’t give up. He shot a super simple trade over to me, requesting three of the 1968 Game inserts from this year’s Heritage – something I knew I could pull right away, in exchange for this pair of Springers from 2017 A&G. That’s the “base” mini up there in the corner.  The other card involved was from the massive What A Day! insert series. This one commemorates George’s first walk-off hit.

Thanks for the cards Steven! I have a feeling we’ll be swapping a lot more in the future – after accepting the trade, I found out that he’s in Texas as well – just five or so hours north of me. That also meant these cards showed up super quick. Here’s hoping I can pass some more cardboard your way soon!

0 Replies to “A Trade Springs Into Action!”