Give, and it shall be given to ye. At least, that’s how Thorzul’s annual Trade Me Anything works. I dashed over a stack of ’80 Topps for his set build and some assorted Brewers goodies (whatever I hadn’t sent to good ol’ Tony of Off Hiatus it seems), in exchange for one card from his Update blaster. 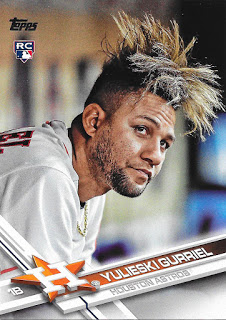 That would be this glorious Yulieski Gurriel SP variation, featuring La Piña in full effect.

Yes, what Gurriel did in the WS was dumb and ignorant (the Darvish thing). But he also put up a really strong season – one that would have had significant ROY merit had it not been for some giant Yankee freak of nature. Plus, he’s been a pretty fun-loving guy and his defense at first base has gotten much better in his short time in the States. I’m glad to see that the Astros seem to have solved the gaping hole a the 3 spot, at least for the next few years.