by MarcPosted onDecember 10, 2017July 8, 2019
I’m trying to keep up with the cards that are rolling in these days. Yankees fan Bryce, whose handle at TCDB is aptly yankeesfan234221, shot me a trade proposal a couple weeks ago, a one-for-one card swap featuring a pair of relics. In fact, they were relics from the same insert set. Bryce was seeking a Brett Gardner swatch from the ASG relics in 2015 Topps Update, and offered up a lovely Dallas Keuchel. 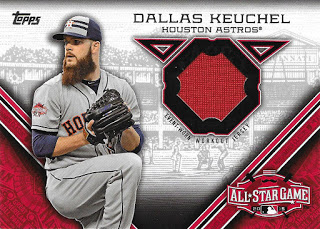 I’ll consider this trading up for a couple of reasons – for one it’s a red swatch instead of a black one. Two, it features our stud lefty, and three: he actually started the game that year.

Bryce doesn’t know it, but I snuck in around 20 Yankees junk wax cards that he needed as well. Actually, he probably knows it by now, seeing as he out to have gotten the cards. This was an excellent little trade if I may say so.