Finally, we’ve come to the end of my monthly autograph reports for 2017 – well, at least until I do the December roundup in a week or so. There were some more solid returns in this batch, and I’m eager to get this thing over with, so let’s have a look already! 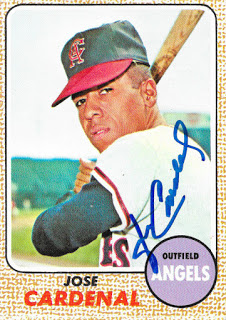 José is yet another player I wrote this year whom I came across thanks to the old Pacific Legends sets. I picked up this sweet ’68 Topps in a Sportlots buy and dashed it off, along with his Legends card as well, but he didn’t sign that one. No matter, I’ll take this swell looking sig on its own!

He also spent a decade coaching at the big league level, picking up three rings with the Yankees during his tenure from 1996-1999. 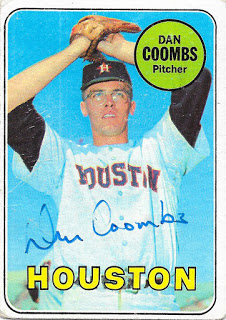 I have to admit, I had given up all hope of this one coming back, as it was out well over a year. That’s what I love about this hobby, though – you just never quite know when one of those little SASE’s will spit out a big surprise. Coombs was a towering lefty who pitched for the Colt .45s/Astros from 1963-1969 before wrapping up his career with two seasons in San Diego. The 6’5″ hurler attended Seton Hall University, where he was also a basketball star of course. The other Astro who calls Seton Hall his alma mater? That would be one Craig Biggio.

This ’69 came out really nice – I love the way Coombs is looming large, true to his size, and the great looking signature. 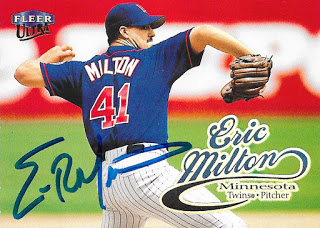 I remember Milton as the leader of the Twins staff in the late 90s and early 00’s – a promising prospect that authored a No-No at the end of his second season when he struck out 13 Angels on September 11, 1999. No-No pitchers are another little mini-collection among my autographs, so this was a fun add. 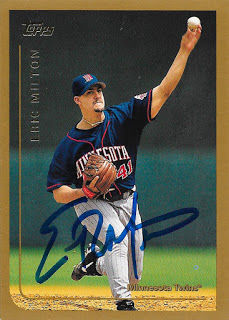 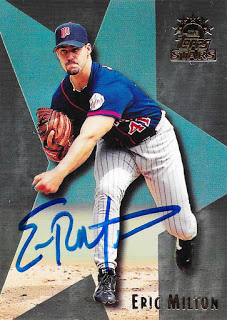 I hadn’t realized until I was putting this request together that Eric was the centerpiece of the trade that sent Chuck Knoblauch to the Yankees, arguably the biggest prospect that the Twins received, along with Cristian Guzman and a couple other guys. In the end, Milton wound up with arm troubles, high ERAs, and was frequently long-ball prone, leading the NL in HR allowed in both 2004 and 2005, with 43 and 40 in those years.

Chalk up another baseball brother on my list. Paul is Rick’s older brother by two years and a few months. While Rick had a long and storied career, Paul’s lasted just five seasons in the majors. The two both pitched for the Cubs during Paul’s time with the team (1975-1978), and in August of 1975 the Reuschels became the only siblings to combine on a shutout when they blanked the Dodgers on August 21st. Rick started and went 6.1 innings before Paul closed out the final 2.2 innings to secure the victory. 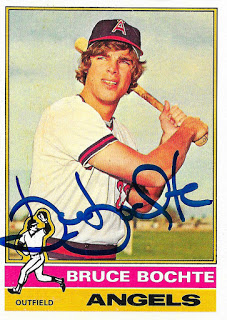 There are baseball cards, and then there are baseball cards. This fantastic piece of cardboard featuring a strapping young Bruce Bochte at 25 years old, tan in the California sun with his stone jaw and surfer hair, with its lively yellow border capping off the show definitely falls into the later category. It is a complete specimen, showcasing a California boy made good in his own backyard. Bruce was born in Pasadena and attended Santa Clara University before being drafted by the Angels in 1972.

Bochte (that’s bock-tee, not bow-chee) was a 12 year big league utility man who split his time between the outfield – mostly in left, first base, and DH duty. He had a career year in 1979 with Seattle, hitting .316/.385/.493 with 38 doubles, 6 triples, and 16 homers, good for 100 RBI and a 134 OPS+. For those efforts, Bruce was rewarded with an All-Star selection, playing in front of a familiar crowd as the Mariners hosted the festivities. 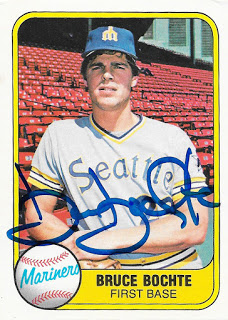 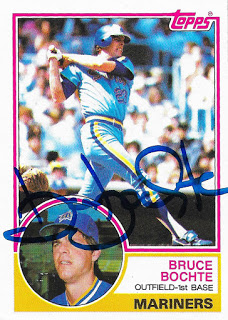 Bruce is a particularly interesting sort of ballplayer – one whose appreciation for the game stemmed from a pure love of baseball. He actually sat out the 1983 season in protest of what he deemed excessive greed in professional sports. After his playing career, he became deeply involved with environmental issues, and has distanced himself from baseball. 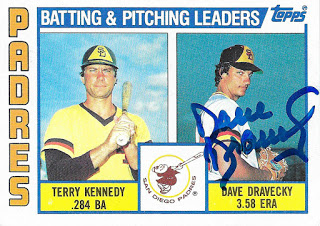 Peer into Dravecky’s eyes on this 1984 Topps team leaders card and you’ll find a young man quietly oozing self-confidence: the young star of the staff poses in near regal fashion, belying a slight smirk. He knows he’s good. Just ask ol’ Terry and his toothpick over there. He’ll tell you what’s up.

Dravecky, of course, is known more for his injuries than his hot start in San Diego or his work on a studded Giants staff after that. Doctors discovered a cancerous tumor in his pitching arm, and in October of 1988 he underwent surgery to have it removed. The doctors advised Dave to sit out the entire 1989 season and not pitch until 1990, but Dravecky was determined to make it back to the team. By July 1989 he was already pitching in the minors, and effectively at that. On August 10th, he made his return to the majors. Five days later he started a game against Montreal by throwing three no-hit innings, but in the fifth he felt a tingling sensation in his arm. He went back out for the sixth inning, giving up a leadoff homer, then hitting Andres Galarraga. When he threw the next pitch to the third batter of the inning, Tim Raines, Dravecky’s humerus bone snapped in two, a clean break midway between the shoulder and the elbow which could be heard throughout the stadium. Dravecky collapsed on the mound; his season was finished. 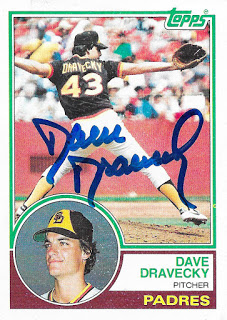 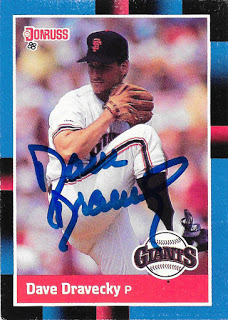 The Giants season was not, however, as they plowed their way to the World Series. When they clinched the NLCS, Dave ran onto the field to celebrate with his teammates, and his left arm was broken again. The cancer had returned to his arm, which would continue to deteriorate. Eventually, his left arm and shoulder were amputated in 1991. He’s since gone on to be a motivational speaker.

Having been familiar with his story, I really wanted to write Dave. Among the cards I dug up was that fabulous ’83 Topps, depicting him mid-pitch – it’s Dave’s rookie card. He answered some questions I had about his career and his injury, and was very kind. Thanks Dave!

Well, that does it. I’m finally caught up on the year’s worth of baseball autograph returns. Now it’s time to write some trade posts!

Hope Santa filled your stockings with plenty of cardboard treats,