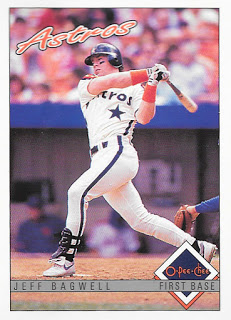 I mean, you should have really seen this coming if you read yesterday’s post. What, a flat rate box full of Astros isn’t going to have any useful Bagwell’s for the collection? Hah, yeah right. Adam even threw in some Biggio cards I could use as well. Let’s take a quick look at what I picked up of Houston’s two career HOFers.

First – some lovely “don’t call it junk” wax. O-Pee-Chee put out a really lovely set in 1993, with a solid front design and a back that rivals the stat layouts of Fleer and the writing of the early Score designs. I was pleasantly surprised to find this baby in the bunch, along with some others from ’93 OPC that I’ll get to in a future post. 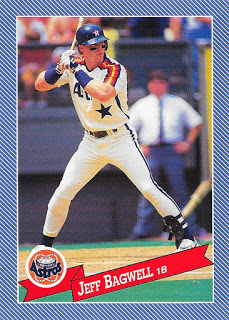 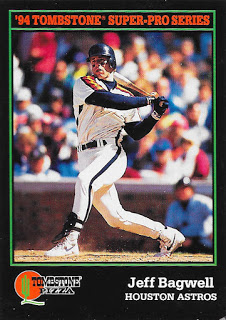 I had copies of these two food-issue oddballs (’93 Hostess and ’94 Tombstone) but these will go toward set builds now. Plus, it helps me get my Bagwell scanning done! 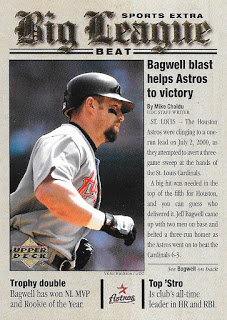 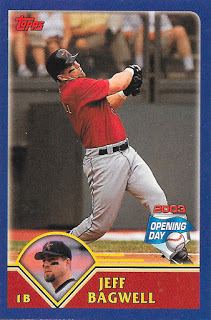 Moving into the aughts, when the goatee was in full effect and Bagwell was still mashing. That’s a Big League Beat insert from 2001 Upper Deck, and a mini-sized sticker from 2003 Opening Day, something that wasn’t even on my radar.. 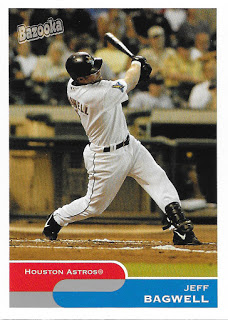 There was a good bit of 2004 Bazooka in the box, including these two cards I needed of Jeff. The left is the base, and the right is a thick ol’ Red Chunks parallel. 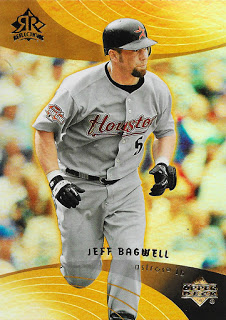 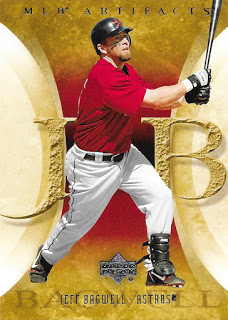 Finally, we get to the decline years – cards of Bagwell in ’05 as he battled through a shoulder that just couldn’t keep up anymore. Watching him struggle in his last season and a half really did a number on my heart – there was always hope that he’d be able to come back after some time off, that the shoulder would heal enough for a couple of sunset seasons and the march to the 500 HR club. Alas, it was not to be. The ’05 Upper Deck Reflections set, on the left, is a really nice design – there were some others of these in the box as well. I didn’t even notice the terrible Papyrus-esque initials on the Artifacts design until I got done scanning these. 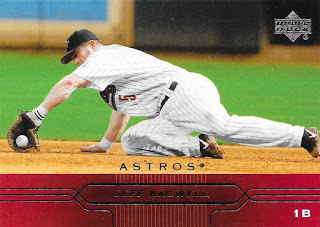 Finally, here’s an ’05 Upper Deck flagship card of Jeff making a play in the field. A lot of people don’t realize just how good he was on the defensive side of the game (or as a baserunner, for that matter). I think watching him man first really spoiled me growing up – I just assumed that most first basemen ought to be able to make the kinds of plays that Jeff did. So when I saw other lumbering big bats get stuck at first because they had to be shoehorned into a lineup, it made me realize that I’d been watching something special all that time. 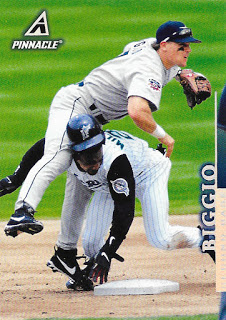 There was a nice little bunch of cards from ’98 Pinnacle, a set I really dig. It’s got some great photography, and the clean layout is very nice. I’ve already got these two, though. 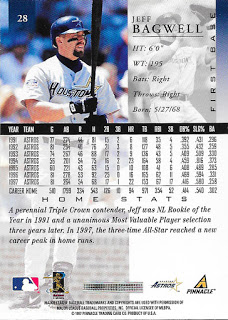 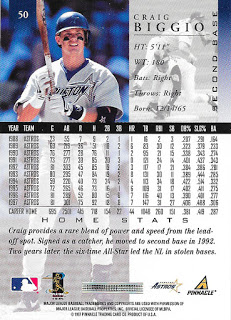 OR DO I? What’s this? Home Stats parallels? Yep, I needed both of these! Now I just need the Away Stats versions and I’ll have the trifectas. These are a fun and simultaneously mildly amusing but annoying parallel that I didn’t even know about until a few months ago. I wonder how many of my ’98 Pinnacle cards I’ve listed at TCDB are actually one of these Home/Away versions.

As you can tell, we’ve made it to Craig’s portion of the post. I hadn’t noticed it until scanning these, but the photo section of the ’93 Select set is actually a bit glossy, while the green border is not. This is a real nice shot. 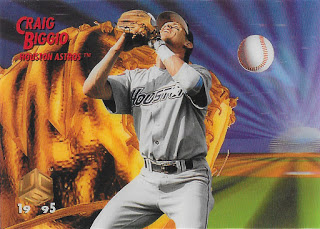 Sportflix put out a second lenticular set in 1995, dubbed Sportflix UC3, which is a perfectly 90’s way of naming a pseudo-3D set. I was a little surprised to see I didn’t have this one already, so it was a nice addition. 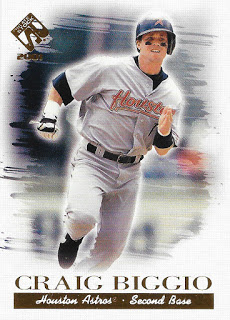 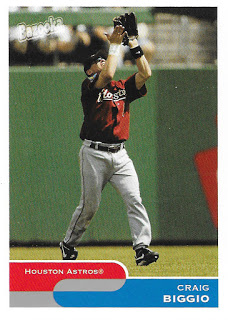 Finally, a pair of new millennium Biggio cards to close out our post. I recall Pacific Private Stock being a pretty good set, but I couldn’t tell you what they were going for with the borders on this 2001 set. It reminds me of a discussion I’ve had with Nick Vossbrink about the cloudy borders on the ’80s Topps Team Leaders cards. There was another ’04 Bazooka need here, featuring Craig during his time spent manning center field while Jeff Kent took over the job at second base.

Thanks again for the awesome box, Adam! For the rest of you, I’ve still got a pair of posts to go in this series, so stay tuned.