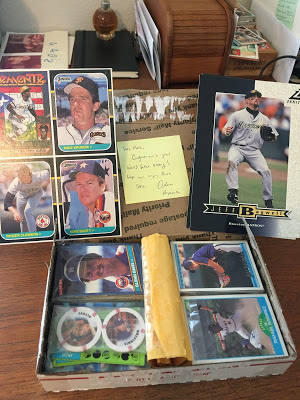 Yowza! As many of you did, I took advantage of our lovely friend Adam’s (ARPSmith) offer to unload some cards from the massive collection he purchased recently. I thought I saw a small stack of Astros at the back of the picture – it turns out I wound up with a whole small flat rate box stuffed to the brim with Astros goodness!

I’m going to have to break all this star-spangled glory into a few posts in order to really do it justice, but I want to go ahead and acknowledge Adam’s kindness and some of this awesomeness instead of sidelining it for my backlog of posts. So let’s dive into some of the stuff!

First, as you can see, there are a couple large items that we’ll get to in short order. I figured in this post we can cover some of the odd-sized oddballs that were carefully tucked in with the contents of this package. I certainly wasn’t expecting this much stuff! 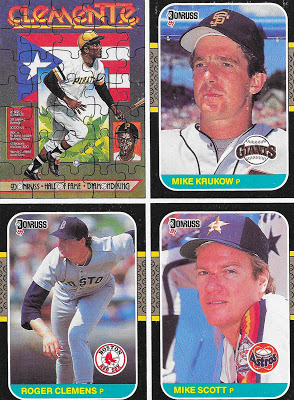 First up is this big guy. As you can see in the photo, this is a full box-bottom panel from 1987 Donruss. TCDB didn’t even have these listed (outside of the Clemente), so I had to have them added. This is really cool, and now I need to pick up a solo of the Mike Scott card, because I sure as heck ain’t cutting this one up. 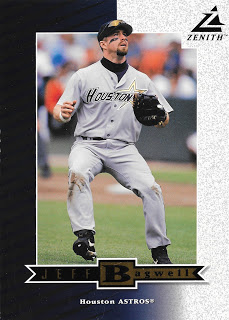 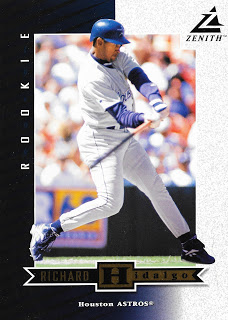 The other two big things in the box were these 5x7s from 1998 Pinnacle Zenith. I didn’t even know Pinnacle put out a Zenith set in 1998. Whenever I first put my want lists together from TCDB (well, mostly put together, as the gaps post-2007 will show), this set wasn’t listed either. I actually don’t even have any of the base cards, but now I’ve got these two oversize buds. That’s an awesome add to the Bagwell collection. 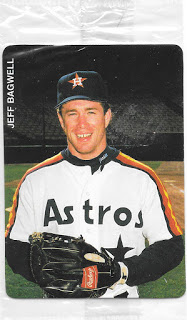 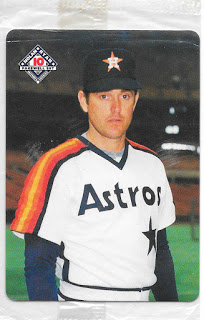 Speaking of adding Bagwells, here’s another pickup from the box – two Mother’s Cookies cards still in their wrappers. The Bagwell is from a 4 card 1992 set commemorating his ROY season in ’91, while the Nolan Ryan is from a 10 card 1993 Farewell set – even though the date on the back says 1994. I like the novelty factor of having “sealed” copies of these, so they’ll stay in their plastic and I’ll try to pick up some more loose ones. 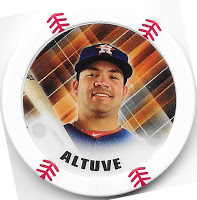 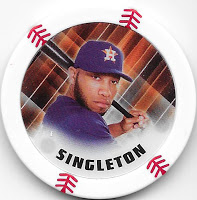 The other oddballs visible in the photo above are these two discs from 2015 Topps Chipz. These are a ridiculous sort of offering, but hey – I’ll confess that I purchased a couple packs when they hit the shelves. At that time, I pulled a Springer, so now I have the whole base Astros team set. There are some various parallels and I may someday put a list of needs together. 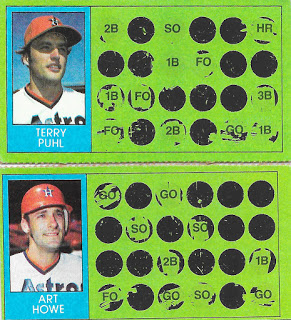 What you might be able to see in the photo, if you have an astute eye, are these two cards from the 1981 Topps Scratchoffs series. This was a game set where the cards came in packs of (three or five I think) panels. The backs of a panel told you the rules on the first card, had a scoreboard on the second card, and some sort of mail-in offer on the third card – either for a ball-strike indicator, a “Super Sports Card Locker” or a hat. You were supposed to scratch off the circles, playing innings against your friend and denoting the runs scored on the scoreboard panel. While these two are scratched (looks like Art Howe had a rough day, but Puhl did pretty well), there was no score on the back of the Puhl.

Along with another TCDB member who had come into some of these, I actually tried to put together a not-quite-comprehensive checklist of the actual panel variations, based on what each of us had in our collection. We’ve determined that there were three or four different panel variations for each of the players on the first card. I’m in the process of lobbying TCDB admins to add a checklist for the full 3-card panels, because I really don’t want to break apart the copies I have.

Like I said, this is just the tip of the iceberg for all the cards Adam sent over, so expect a few more posts to come. Thanks for the package Adam! I’ll have to try and find something really cool to send back your direction.