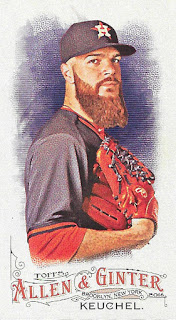 Hey, I’m making progress! This belated trade post brings us into February 2017, which means I’ve now cleared out the first month of overdue trade posts from last year. Here’s another short and sweet trade from TCDB member Sean, whose name on the site is Broadway.
Sean and I swapped some new cards, with about a dozen going each way – I sent some Ty Cobb cards and some inserts from 2016 Gypsy Queen and Heritage, while he sent me back some nice 2016 cardboard as well. For starters, we’ll start with our star starter: 2015 AL Cy Young winner Dallas Keuchel on this 2016 Allen & Ginter mini A&G back. I don’t have a back scan handy, though, so you’ll just have to take my word for it.
On to the other cards! 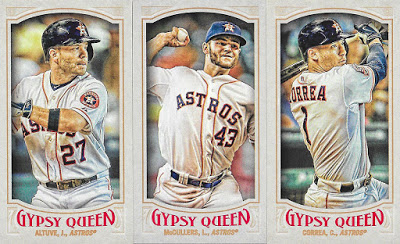 Dallas wasn’t the only mini in the bunch – Sean was kind enough to trade me nine of the Astros minis from 2016 Gypsy Queen – including these three rad Box Variations of Altuve, McCullers, and Correa! 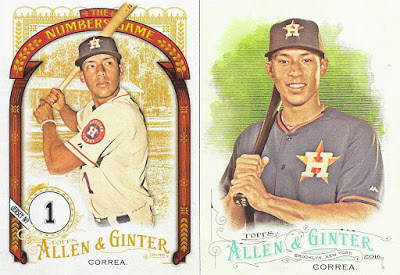 There was also a pair of Correa cards from 2016 A&G, including the Numbers Game insert featuring our #1 dude. 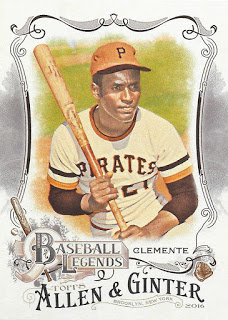 Closing out the Allen & Ginter cards was this lovely Roberto Clemente Baseball Legends insert. Always fun to add another card of The Great One to the collection. 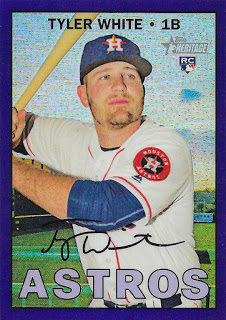 Finally, we have the piece de resistance: a Tyler White Purple Chrome Hot Box Refractor from 2016 Heritage High Numbers. This one’s a beauty. I’m still hoping for big things from Tyler in 2018.

Thanks again Sean! I need to strike up another trade with you soon.