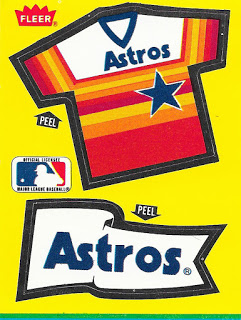 I’ve got to say, it’s a pretty great feeling to be able to stay on top of the ol’ blogroll. There’s a good 190+ feeds under the Card Blogs category on my Feedly, and I’ve been able to keep up with all of it lately. Of course, you know what that means – it’s time to get back to work catching up on my blog.

This is – yep – another TCDB trade. We’ve moved into April 2017 at this point, for the record. I still have hopes of writing drafts for everything by the time the month is out.

Anyhow, let’s talk glorious cardboard. These cards came from Brian, aka Bizzork over at the database. I packaged up some oddballs and a nice little stack of football and basketball cards. In return, I got a few nice oddballs, a handful of vintage non-baseball cards, and a couple of Astros. First up is this awesome jersey/pennant sticker from 1985 Fleer. I absolutely love this one – probably the best set of Fleer stickers out there. 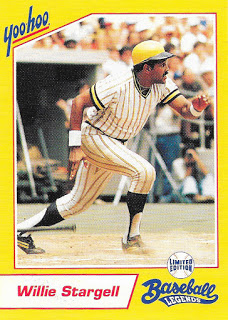 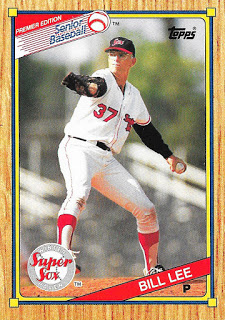 Brian had a couple nice oddballs of guys I PC – Pops for the Pittsburgh connection and a rad card from the short-lived Senior League of the Spaceman. 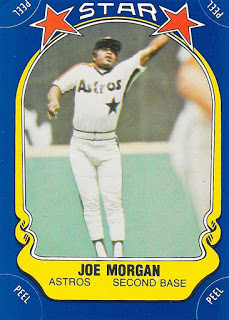 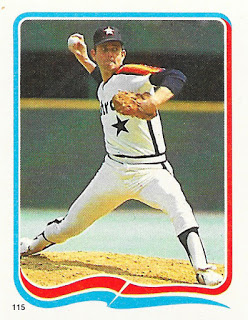 Oh, and we’re not done with the stickers! We’ve got two ‘Stros HOFers here, with Joe and Nolan’s offerings from 1981 and 1985 Fleer Star Stickers, respectively. The Nolan is mini-sized. 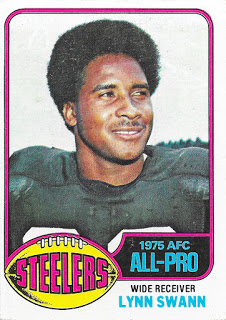 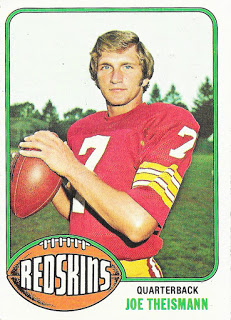 I mentioned that there was some vintage outside of the baseball world. When my side of the stack looks a bit heavy (though I’m quite thankful to offer up a lopsided trade), I’ll often take a peek at what someone has available that’s not on my want list. That’s how I stumbled across these beauties from 1976 Topps football set. Picking up a card of Swann, responsible for the Immaculate Reception, was a must! The Theismann is due to us living in Virginia for a little under two years when I was quite little – I remember going to his restaurant and meeting him, getting an autographed black and white 8×10 they would give to kids. I bent the hell out of the bordered area trying to squeeze it in a page later on – someday I’ll show it off here. I figured I might try to send a couple cards to Joe for a little ink, too. 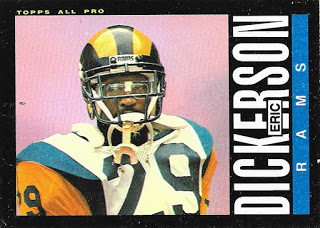 We’ll close out with this wonderful piece of throwback cardboard: an Eric Dickerson from 1985 Topps. Dickerson grew up in Sealy – a bit of a football powerhouse in the greater Greater Houston area (about 30 miles out of town), and was a dominant running back both at SMU and in the pros. I figured it was time to add a card or two of him to my small football collection, especially from such a great set.

I know that the ’85 football set is a bit of a nod to the ’62 football set (which I’ve actually patterned some baseball customs after), and I think it’s flat out awesome. I’m a little surprised Topps hasn’t rolled this out as a cross-sport insert revival in an Archives set. I guess I’ll just have to make some of my own customs!