by MarcPosted onFebruary 22, 2018July 9, 2019
Uh-oh. I’m on the verge of letting this card show content bleed into two weeks old, and that just won’t due. Time to write a few posts!
If you’ll recall, I left of with a veritable Bagwell Bonanza, which was my second stop of the show. I’m trying to maintain a small sense of order to my postings, so let’s continue the timeline. As I was wrapping up my Bagwell purchase from Darryl, a dealer who runs the monthly hotel card shows in town, up strolled ol’ Commishbob with his big wins of the day – the All-Star programs he mentioned on his blog. That had killed his budget for the show he said, so he and I strolled around and chatted a bit, before he went off to buy some supplies. I turned down another aisle, and ran into a dealer with tables full of nothing but autographed cards, balls, and other memorabilia. This included several binders of Topps cards that ranged back to 1957. Granted, the earlier years of that range were a bit light, but spotting an opportunity to potentially nab some tough sigs, I dug into the binders. 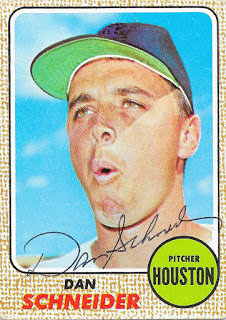 One of the first ‘Stros I came across that was not an easy get was Dan Schneider. Dan spent parts of two seasons with Houston, in ’67 and ’69. As a lefty out of the pen in 1967, Dan went 0-2 in 54 appearances, with 27 games finished, 2 saves, and a 4.96 ERA in 52.2 innings pitched. He then spent ’68 in the Pirates system, before closing out his major league service with 6 appearances for Houston in 1969, going 0-1 with a 13.50 ERA in 7.1 innings. Ouch! I’m not sure if he was traded or released, but he finished spent the rest of ’69 and all of 1970 with the Cardinals AAA Tulsa affiliate before hanging up his spikes. Dan’s a really tough signer through the mail – there are spot reports, but my two attempts have long been dry, so I mad sure to nab this.

Next on the list was Astros (and Reds, sigh) legend Cesar Cedeno. He was a true force to be reckoned with on the ballfield, a talented speedy outfielder who could hit and had a cannon arm. As far as club history goes, he’s one of the bigger names that I’ve been missing in my Astro-graphs project. Cesar has been coaching in the Astros minor league system for the past several years, but he’s been a non-signer for me as well. I even tried setting up a 50/50 with a guy that graphs the low minors, and he struck out in a handful of attempts at games, so I decided to just pick up this fine looking piece.
After one binder, I’d asked the dealer about prices on a few and he’d told me most were $7 a pop, unless they were stars/dead. Keeping my budget in mind for the day, I was ready to call it at these two cards. He was helping another customer who had decided they wanted a signed ball from the second row of his grid of ballcubes – a hefty 20-ish across, 8-9 cube tall beast. So being the good samaritan I am, I held a couple columns steady while they pulled out 7 cubes to get at this one ball, then held it again as he replaced them. In the mean time, I spotted another binder of mostly 90s certified autographs… 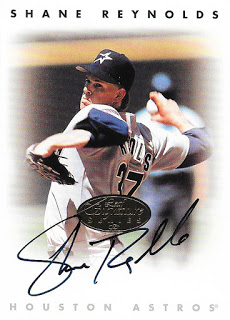 That lead me to these two cards from 1996 Leaf Signature Series. John Hudek has been another ‘Stro whose eluded me – his signing history is pretty spotty, which is a shame because I have an early minor league card I’d love to get inked. But this checklist (and the update) has a few great names on it when trying to find some otherwise difficult guys. There were several examples to choose from, but I went with the more rare Silver parallel. I’ve got plenty of Shane Reynolds autos already, but that’s a Gold parallel – it’s the foil stamp in the middle that’s different, the base cards are Bronze. I wasn’t about to pass up a Gold. I figured I’d try making a $20 offer for all four cards. The dealer was more than happy to oblige, stating that I’d earned it after helping out. I reached into my pocket to fetch a Jackson when I asked – well, would you throw in one more for another five bucks? You see, I’d found this… 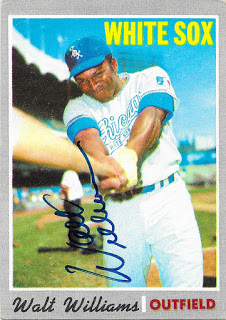 No Neck! Walt came up with the Colt .45s, spending 1963 at AAA before opening the ’64 season on the bench. In a month with Houston, No Neck was, well, no good. He got into 10 games, going 0-for-9 in 10 plate appearances and reaching on an error once. In a pair of pinch running appearances, collected his only stolen base and run scored for 1964. He was released in late May and picked up on waivers by the Cardinals, who would later deal him to the White Sox. Williams would make it back to the majors with the South side squad in 1967, and put together a fine career, putting up a .270 average in 842 games across 9 seasons. Walt has no Astros cards (though there’s a McCarthy postcard out there that I just stumbled across!), and he passed away in January 2016, before I was able to get a custom out to him, so adding a signed vintage card of him was the next best option. There were several to choose from in the binders, but I really dug this 1970 bat barrel card.

All that at five bucks each, and I crossed off four more names from the all-time roster! That pushes me to signatures of over 47% of the guys to wear a Houston uniform, including crossing 43% in uniform.

There’s still a few more posts to come out of this show’s haul, but I’ll stop here for now.

0 Replies to “Back to the Show: Disappearing with Some Ink”