Whoa. Something momentous has happened here at RTA. I have made it to two card shows this year, and it’s only February. That pace certainly isn’t going to hold up, especially given that I should really put a freeze on my buying for the time being, but it’s a pretty nice feeling. We all know that there’s nothing quite like spending a Saturday developing a neck/back ache as we flip through box after box on a good dig, whether that’s at an LCS or our beloved cathedrals of the hobby, the card show.

For those of you not familiar with Houston, there are two big shows here each year – one fairly early in the year (this one) and one around late May / early June. Otherwise, there are some small hotel card shows that pop up, but these are the big ones. They’re put on by TriStar – yes, they of the weird prospect sets from a decade ago, that crazy Obak set, and the crappy repack boxes that promise you might possibly have a minuscule chance of pulling a ’33 Goudey Ruth. They’re headquartered here, and twice a year they take over the NRG Arena halls with what’s usually a pretty good draw for dealers and autographs. Sunday featured a couple dozen Astros, but I wasn’t able to get out (or budget for) any of those signings.

What I was able to do, though, was the real milestone of the day: I met another card blogger in the flesh! Not just any blogger, mind you, but Commishbob of The Five Tool Collector! To me, that’s even better than just hitting up the show. It was really cool to finally meet Bob, and to chat a bit about what we were hunting and hoping to find, as well as a bit of how we got into our respective collections. 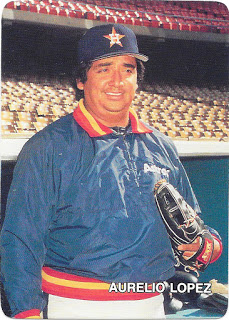 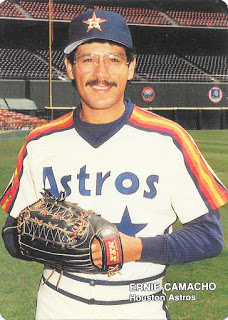 There’s a lot of good stuff to show off from the day, including a monster stack from the final dealer I hit up that I’ll need to break into at least two posts. First up, though, are a few highlights from one of the random tables I poked my nose into late in my stay. As I was wandering around with only about half an hour left on my clock, I saw a stray “10¢ Astros” long box on a dealer’s table, with a few 76’s poking out. I could tell from the card edges that most everything would not interest me, so it would be a quick rifle to check for any odd stuff. That turned up a baker’s dozen cards, including ten Mother’s Cookies from ’87 and ’88 that I know Nick Vossbrink will really dig. These sets were really great for landing Astros cards of guys who made short stops with the club, such as Señor Smoke and Ernie Camacho. In fact, that’s Ernie’s only Astros card. 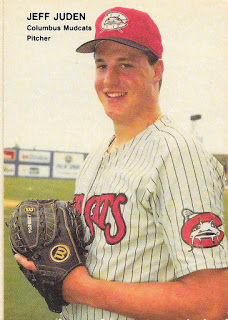 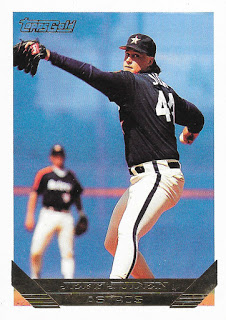 Also from this box were a couple of Jeff Juden cards I was lacking. The first one is from the 1990 Best set, and looks an awful lot like the old Mother’s Cookies cards of the day. Finally, this ’93 Topps Gold and another I picked up at my last table of the day have me down to 8 Astros left for the Gold team set.
When I first walked into the show, though, there was one priority: meeting up with Bob. I’d arrived not long after him, and Bob made himself easy to find, having plunked himself down at one of the first tables in the hall to dig through some early ’70s basketball for a set he’s building. After a few minutes of chatting, I was about to head off in search of boxes to dig when I noticed one on the table peering slyly my direction. It was filled with generally well-loved 50’s cards and said $2 each or 10 for $18. Hmmm, I thought – perhaps I could find a few friends to take home here.

My hopes for the box weren’t quite borne out. There were some ’57s I might have picked up towards the eternal set build, and plenty of fun cards, but I was being a bit budget conscious knowing that it was my first table of the day. I did pick up this ’56 Johnny O’Brien with the intention of sending it to him soon for a signature. I was really hoping to find the famous ’54 Topps of Johnny and his twin brother Eddie, photographed together kneeling with bats on their shoulders. Thanks to the Effectively Wild podcast, I’d learned that not only were Johnny and Eddie twins who played together in Pittsburgh, but that they had almost identical careers and stat lines. Plus, Ben and Jeff managed to set up a call with Johnny (Eddie passed a few years ago) and the guy was an absolute goldmine of information. For being one of the older living ballplayers, his mind was extremely sharp – remembering intricate details of games he’d played and all sorts of things. What’s more, Johnny was a bit of a two-way player, pitching in 25 games. I do believe I have an Archives card of the ’54 O’Briens stashed away somewhere, I’ll have to dig it up. 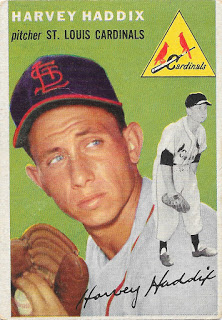 Finally, I added a pair of nice Harvey Haddix cards to my PC. Aside from some soft corners on the ’54, these were in particularly great shape. These were actually the final cards I bought at the show (I’d set them in the back of the box and resolved to pick them up on the way out if I still had the funds), and were a lovely way to close out the day. TCDB has a total of 128 Haddix cards listed, including a few particularly rare autographs, a handful of 1/1s, and the recent buybacks. I’m not interested in chasing down everything, but I definitely want to do a build of his Topps/Post releases, the Panini Golden Age cards from a couple years ago, and if I can, the Nu-Cards and Kahn’s cards from the ’60s. I’m up to 14 cards now, so that’s not a bad start.

Alright, be prepared for several more posts from this show! As you can see from the teaser up top, I hit a big stack of Astros.