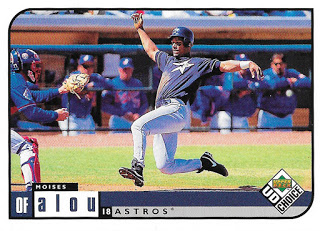 Last week I shot a PWE over to our pal Chris at Nachos Grande with a handful of 2018 Topps that he needed. Being the great blogger he is, Chris returned fire with a PWE of his own – a handful of Astros for me, and a little something different.

I decided to show off the most interesting Astro in the envelope, this 1999 UD Choice Moises Alou. It was in 1999 that Upper Deck switched it’s Collector’s Choice brand to UD Choice, a move that would last one season before they canned the set altogether. I suppose Upper Deck thought Victory would be their new low-price set for kids, and that they didn’t need Choice anymore, which is a shame. Victory is fine and all, but Collector’s Choice has some excellent photography.

Case in point, this Moises Alou card, about which I’ve already written more than I expected. It’s a great action shot – a play at the plate in what is likely a Spring Training game. What’s more, it’s 1999 (mayyyybe it’s ’98 in the photo but I doubt that), and that means the skipper in that Expos dugout is none other than Moises’ dad, Felipe. Also, he’s totally going to be safe here. 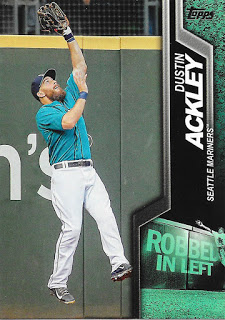 The real surprise in the envelope though was this Dustin Ackley Robbed insert from 2015 Topps. I thought this was a great insert set when they came out, so I decided I’d try and put them together. While it hasn’t been a top priority, Chris was astute enough to notice it sitting buried deep in my wantlist on the “Oddballs, Inserts & Subsets” tab. If you’re wondering, I still need five of these: Amarista, Ellsbury, Rasmus, Springer, and Trout.

Thanks for the cards, Chris!