While I’m still at work on that cardboard housekeeping, I had to do some significant real housework this past week. It was Spring Break, which meant that my beloved wife, a teacher, had the week off. My current job is flexible, so I stayed home Wednesday to hang with the family and work from my home office. We were heading out the door in the morning to head over to the local coffee shop for some ‘spro and doughnuts – the new one in which Hunter Pence is a part-owner – when we looked at our front yard. The flowerbed by the porch was a lake, with a river running down the side of the driveway to the street.

To make the story of a very long day short, the main line from our meter had split thanks to an overgrown pecan tree root that had been putting pressure on it for who knows how long, and we had to repair it. 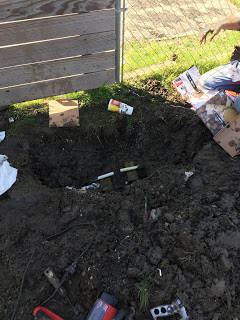 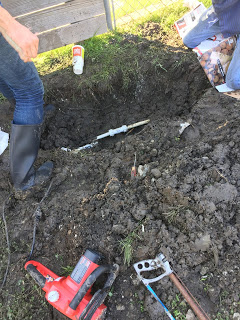 The gory details: the meter evaded our detection for over an hour – the grass had grown over it and it wasn’t anywhere close to where it was marked on our plat. The plumbers couldn’t find it, and wanted to send me an estimate to replace the whole line (that turned out to be four grand, they thought it was galvanized pipe and there would have been concrete work involved). I’d called the city to help me find the meter – that guy showed up not 15 minutes after I finally found it. After the plumbers had gone, my wife’s father, a mechanic and DIY champion, told us he’d be here within the hour, and we’d find the leak and make a trip to the hardware store. $100 bucks in supplies (shovel, concrete boots for the muck, $5 part, $75 “disposable” chainsaw that we ruined) and a couple hours of elbow grease later, and all was fixed. The pecan root was a good 6″ thick, and we cut out about two feet of it. It was larger than my calf. I left the pipe exposed overnight to make sure the repair held and let the ground dry up a bit, and spent some time this weekend filling in the 4′ x 2′ x 3′ hole we dug, then putting in some fresh sod over the spot in my yard where it looked like I’d just buried a body. 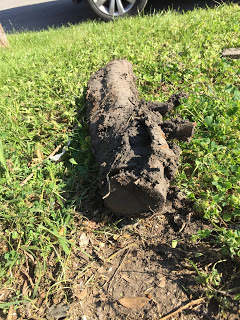 The culprit. Again, bigger than my lower leg. I wear a size 10 1/2 shoe, for reference.

TL;DR: Homeownership can be a real pain in the back.

But back to the cardboard housekeeping! Here’s a delightful little folder from a package that Kerry of Cards on Cards sent my way last June. I’m sure there were more great cards, but let’s look at what I threw on the ol’ scanner, shall we? 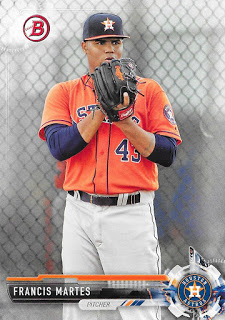 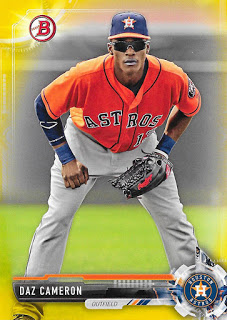 Frankie Tuesday! Bowman must have been pretty new at the time, so these would have been particularly welcome at RTA. I felt like the 2017 Bowman design was quite well done, although the graphics around the team logo could be a bit much. Daz may have been shipped off in the Verlander trade, but this yellow parallel isn’t getting shipped anywhere. 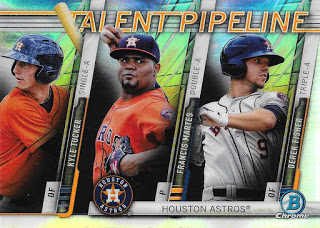 More Frankie Tuesday! Plus, this Talent Pipeline insert has our top prospect Kyle Tucker and World Series hero Derek Fisher on it! This card is loaded, y’all. 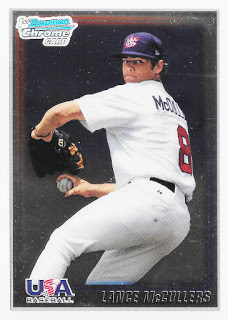 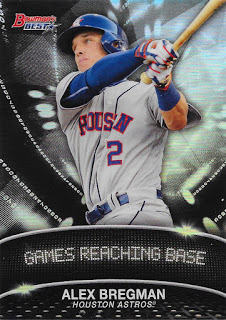 Kerry also sent over two shiny Bowman cards of some big-time studs from the current team. Check out baby Lance in his 2010 Team USA duds! Bregman is turning out to be a damn fine defender over at third base. 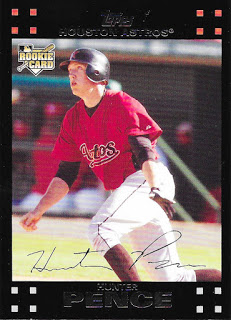 Last but not least in my scans, we close the package out with a Hunter Pence rookie card from 2007 Topps Update. But wait, this ain’t no ordinary base card. No sir, that’s one of those “red back” variations.

Thanks again for the package Kerry! I’ll be more prompt next time. Gotta find some of those Cards cards to send your way.