by MarcPosted onMarch 10, 2018July 10, 2019
Yikes! We’re a week into March and I haven’t gotten my February TTM report done. That’s mainly due to a lack of posting time, but as you’ll see, February was quite robust when it came to returns. I normally post these in the order they arrived, but I’ve saved a couple big names for last in this post, so you’ll want to make sure you at least scroll down to the end. 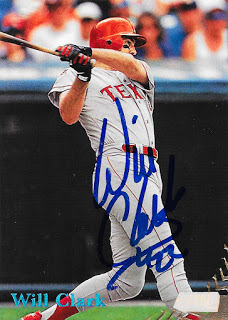 Will Clark: 1/1, 88 days.
February started off with another swell return from Will Clark. This is my third time writing him – he only signs one at a time, and I try to space them out. Will’s great, always adds his number to his sweet looking sig, and answers his mail in 2-4 big batches per year, from what I can tell. You can write him c/o the Giants, and it’ll come postmarked from Louisiana, where he lives.

Aw, lookit little fresh-faced Scotty Servais! He’s fresh off the 1988 US Olympic Team and putting in work in the Astros minor league system. I always love adding a minor league card to the collection 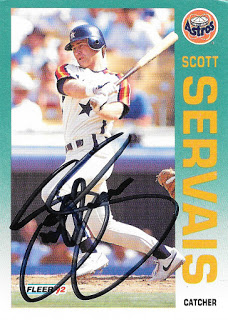 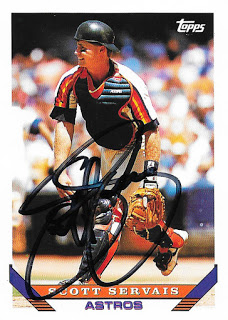 I got Scott in person way back in 1992, at an Astros FanFest, and then again through the mail probably some 5 or so years later. When I came into a huge box of Astros early in 2017, including a great many dupes, I ran into plenty of TTM fodder. I pulled out a few cards of Scott and sent them off to the Mariners, where he’s taken over as manager. Love that ’93 Topps with him decked out in the catching gear, too. 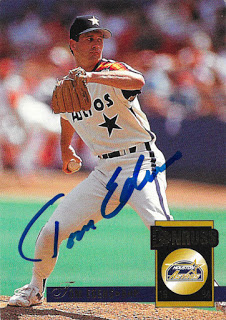 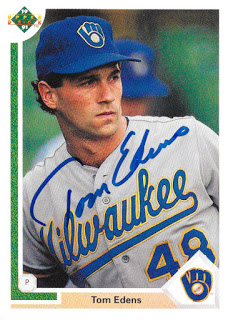 You wouldn’t think a righty reliever who spent two (quite good) seasons with the team in the early 90’s would get me so excited about a return, but then again, you’d be surprised. I’d been wanting to add a signed card of Tom to the collection for some time. I met him as well when I was probably 9, and wound up with a signed 5×7 to show for it, but there’s just something super-satisfactory about being able to slide another card into my Astro-graphs binder. So when a reported success popped up recently, I dashed off a letter right away. 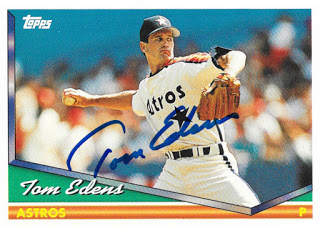 While the other two cards are fine and dandy (the blue sig looks especially awesome with those Milwaukee road grays), it’s this ’94 Topps that will make its way into the binder. It’s just a nicer photo, and doesn’t have the mismatched logo of that ’94 Donruss. 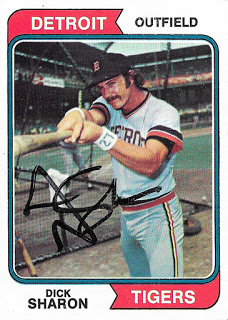 Dick Sharon: 3/1, 47 days.
Heheheh, Dick Sharon. He’s going right next to Craig Skok in the funny pages. In all seriousness, it’s sha-rohn, as Dick is Jewish. He put in 242 games across three seasons with the Tigers and Padres from 1973-75. Contact seems to have been Dick’s biggest issue – he twice had more strikeouts than hits, and his career stat line looks something like this: .218/.293/.345 with 102 hits, 20 doubles, 13 homers, a robust 50 walks, but also 95 strikeouts. Mr. Sharon also signed two index cards. 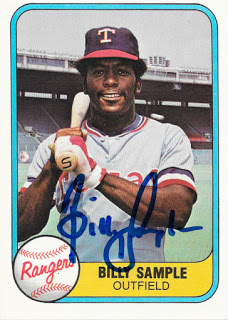 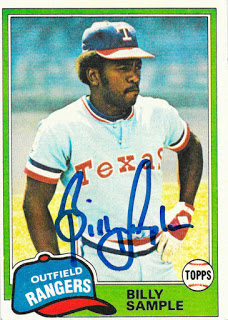 The always generous Billy Sample signed a total of seven items for me, adding a nice article and signed index card to my package. He’s got a great sig, and even hangs out in the autograph groups on Facebook, so I made sure to thank him directly there. It was nice to add another ’81 Fleer to the collection. I’m not trying to hard to chase that set, but I’ve got about 5% of it signed now. 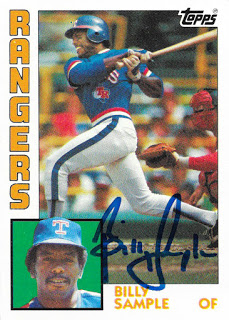 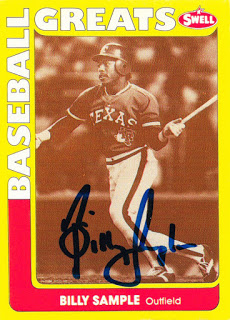 Love the big swing on Billy’s ’84 Topps, and those early 80s Rangers uniforms are nice looking, so this one was a no-brainer. I was a bit surprised to see Billy in the ’91 Swell Baseball Greats set. He had a strong start, but injuries hampered his career. 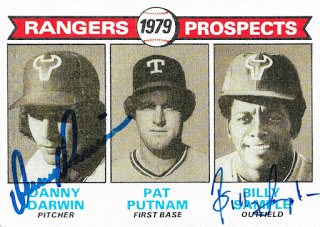 The best part of the return, though, was getting some more ink on this ’79 Topps prospect card. I’m not sure how Danny Darwin managed to get Adam Driver to travel back in time for photo day, though. 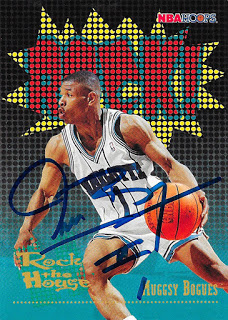 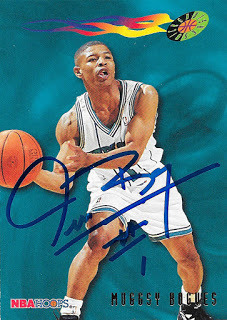 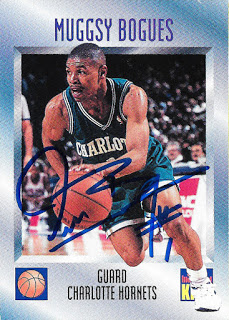 Muggsy Bogues: 3/3, 1482 Days.Yep, you read that right. This one was out for four years. Way back when I first started this hobby back up, I saw a reported success for Tyrone “Muggsy” Bogues and though it would be awesome to get his signature. I’d chalked this one up as lost long ago, so I was awestruck to see it make it back to my mailbox. I guess it’s a good thing I still keep the old P.O. Box, because we weren’t even in our new house until almost a year after I’d sent this.

I’ve gotta say, that ’95-’96 Hoops set was pretty stellar. There are a bunch of nice subsets, and I’m quite partial to a lot of it’s big, fun nature. 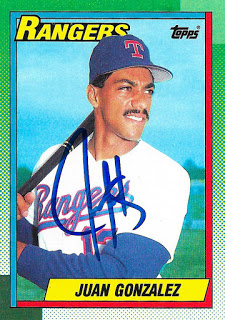 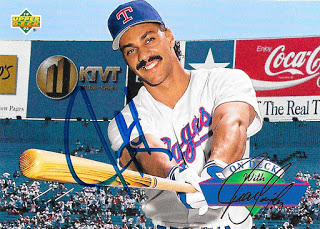 Good ol’ Juan Gone graced me with another fine return. I think I’m probably done writing him, this makes three requests now, but I wouldn’t rule it out if I found a cool 8×10 at some point. I added another signed rookie card in this batch with the 1990 Topps – I’ve got a ’90 Donruss as well, but not the reversed negative. If I stumbled into a spare copy of that I might send it, too. 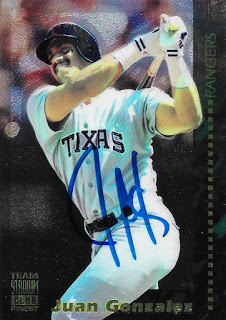 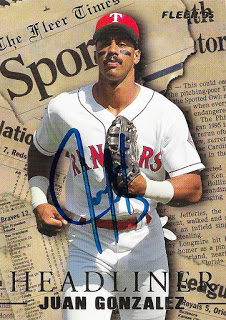 Overall, I’m really pleased with how these came out. The ’94 Team Stadium Club card looks excellent in hand. The Headliner inserts from 1995 Fleer were really cool as well. 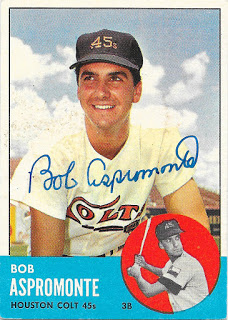 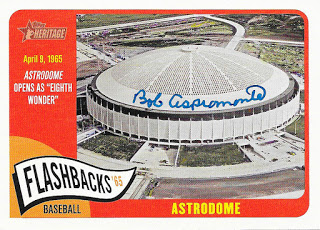 I’ve been working on a new project, which you’ll see in a moment, and since it meant that I had to write Mr. Aspromonte, I put together another batch of cards for him to sign. He’s a very excellent TTM signer, and often sends back extras. This time he added another career highlights article and a signed photo. I have been piling up copies of that 2014 Heritage Flashbacks insert (still looking for more, by the way) to get signed by some of the big names from club history. I really love how he signed around the rim of the ‘Dome. I’d picked up the ’63 Topps in hopes of getting it signed at Legends Weekend last year, but Bob was unable to make it out the event. 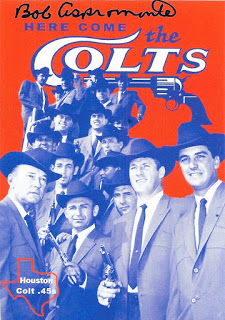 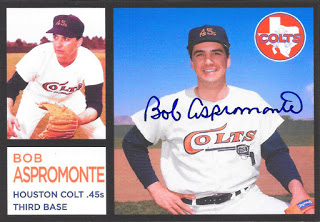 I’d whipped up a couple custom cards as well – one in the style of the ’62 football set, which I think is turning into my de facto custom for the moment. The other uses an excellent image I found in the UH Library Archives, showing the Colt .45s at the steps of the team plane. Yes, ol’ Roy Hofheinz made them travel in blue suits and black cowboy hats originally. You can’t really see it here, but there were even dress shirts with baseball stitches running around the collar and plaquet. 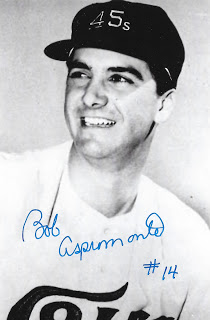 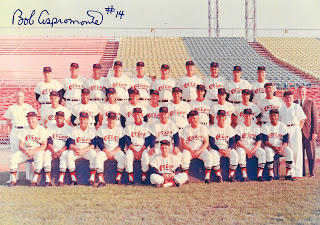 Here’s that project I was talking about. This is actually a 5×7 photo using another image I surfaced in the UH Archives. This is the team photo from 1962, and it’s rarely seen in color. I really love it because it shows off the colored seats found at old Colt Stadium. They had to have taken this at sometime in May, because they’d already traded Bobby Shantz for Carl Warwick. I’m debating whether or not I should send it to Shantz to sign even though he’s not in the photo. There are a dozen guys in the photo that are still alive, including Traveling Secretary Bill Giles in the suit on the far right. Yes, that Bill Giles, former Phillies GM. Talk about a lifetime in baseball! Bob also added this great black and white photo. What a great return.

Ok, are you ready for the big guns to come out?

BOOM! Early in February, returns started popping up from the incredible Larry Walker, so I grabbed the only card of his I had laying around and dashed off a letter. Much to my delight, this baby came back in just under two weeks! I dig the inscription, too. I may try once more with an 8×10 from the “Motherlode.”

Speaking of those 8x10s, I hit my biggest success of the month with one! Check out young Billy Williams! He’s notoriously spotty TTM now, but again – I’d seen a success reported a few months back, and I figured I’d give it a shot. I went on a photo hunt thinking I would make a custom as well, and dug up this super cool image of Billy in the minors with Houston. Williams spent the 1960 season in AAA Houston, its penultimate season as minor league town, but I thought this one would work really well in the ’59 style. I guess the combo of large envelope + great letter + custom card (he kept the other one!) worked in my favor. This is definitely one of my favorite returns since I’ve started this back up. 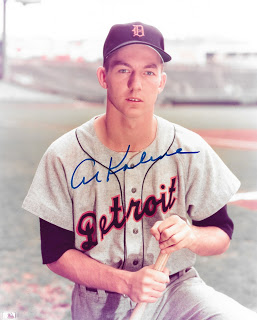 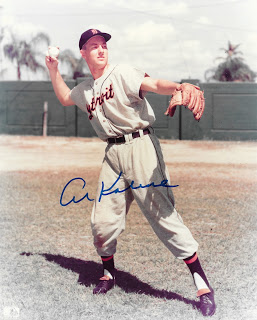 Last and certainly not least among February’s returns was my second 8×10 success (double success?), featuring another HOFer on photos from that giant stack. Look at these! A nice letter and a donation (Kaline is just $10 per item, which blows my mind), and bam! Two amazing signatures on a baby-faced Mr. Tiger! I don’t even know what else to say, other than the fact that I was trembling with joy opening this envelope even though I knew what was inside.

So, yeah. February was an awesome month.