by MarcPosted onMarch 20, 2018July 9, 2019
Today, it’s time for something quite a bit different. As I’m sure you’ve probably seen, our pal Colbey over at Cardboard Collections has resurrected the wonderful piece of hobby known as the Affordable Group Break. In fact, he’s even created a FB group for them if you are so inclined.
Several weeks ago, as Colbey announced all this, he led off with two boxes of great affordable cards: 1993 Pacific and 1994 Pacific Crown Collection. “Oh boy,” I thought, “I know I need some Astros there!” So I eagerly signed up and sent my payment.
Only, there was a little problem – Sam (I believe this is The Daily Dimwit Sam if I’m not mistaken) had already claimed the Astros, and I hadn’t seen this.
Hmm, what to do? Well at only $7 for the break, I wasn’t going to make Colbey refund me and potentially delay the break. So I browsed the available teams. The Mariners and Orioles were both still available – potential Griffeys and Ripkens awaited. But I did something quite unexpected for this collector.
I took the Rangers. 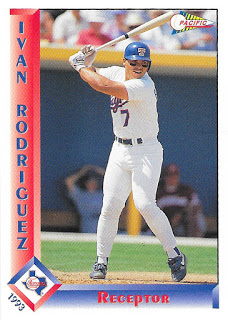 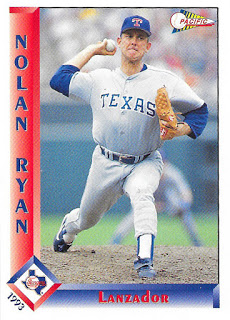 Why take the Rangers, you ask? Well, my friends, it comes down to a few PCs. Obviously, there’s Nolan and Pudge, and they both showed up in the ’93 Pacific box. Now, these are guys I don’t actively chase (other than Nolan’s Astros cards) but I will gladly give them a home. 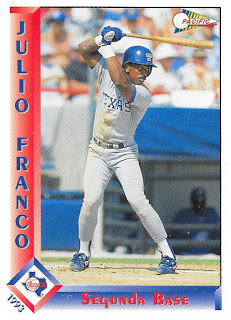 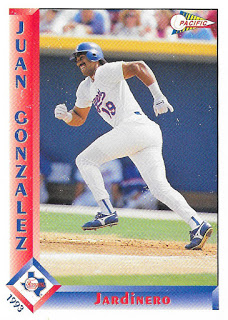 After glancing at the checklist, the other two “hits” I was hoping for were a pair of lesser PCs. I suspect we all have these – guys we dig and hold onto some cool cards we come across, but otherwise offer stuff up for trade. Maybe you don’t, but I do. I have about half a monster box of saved cards of semi-stars, stars, rookies, and otherwise enjoyable cards that I plan to keep, while the grand majority of my non-Astros cards are available for trade. Franco and Juan Gone fit into a decidedly different category, though. These are guys that I will save particularly more cards of than most.* Juan Gone was incredible to watch, and he’s been very kind to me TTM, so I have a nice modest stack of his cards now. As for Julio – well hell, you have to love him. The guy is still player-managing in Asia, and that crazy cocked batting stance is just wonderful.
* This is not an invite to send me stacks of guys like this – I’m still trying to pare things down here. But particularly rad cards of minor PC guys like this are always welcome. 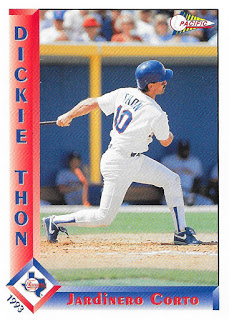 I came away with just about all the Rangers from the ’93 Pacific box, including a few dupes. This was pre-insert-crazy Pacific, after all. The rest are all available (including a spare Nolan) and may head out to Judson at My Cardboard Habit if he wants them, but I decided to hold onto this Thon. I gained a new appreciation for Thon a few years ago when I read his whole story, and while I don’t chase non-Astros cards of him, I like this one. 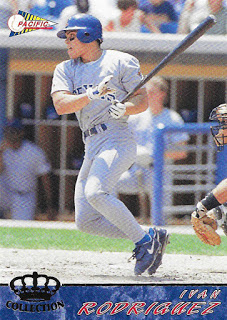 Pudge and Franco both showed back up in the 1994 Pacific box, which was a pretty fun break to watch. I pulled the Marlins as my second team (thanks to the ol’ Randomizer ¯_(ツ)_/¯), so I’ll have to find some poor sap rare Marlins collector to saddle with those, or someone actually building ’94 Pacific. Seriously, though – if you know a Marlins collector I have plenty of neat stuff to send them, and I won’t even ask anything in return. Just that they accept all my Marlins. 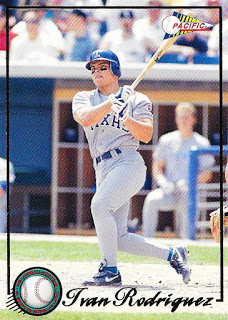 I was a little saddened to find out that I didn’t draw one of the super sparkly Prisms (or the 1 per box Gold Prism) out of ’94 Pacific, but I did land one of the rare inserts! Yeah, the Prisms are super cool, but I got one of the All-Latino All-Star Team cards featuring my man Pudge! According to BaseballCardpedia, these were apparently Hobby-only and limited to a print run of 8000, although they aren’t numbered.

So, I may have missed my Astros (although Sam said he’d send his dupes, I need to reach out to him), but I landed plenty to call this a successful break. Thanks again for hosting, Colbey!

0 Replies to “Uh, What Are These Rangers Cards Doing Here?”