by MarcPosted onApril 20, 2018July 9, 2019
April’s almost over, so I better tackle last month’s TTM report before another one creeps onto the horizon and turns this into a double post. There’s not anything too crazy to report, although I did add a few Astros to the collection in March. 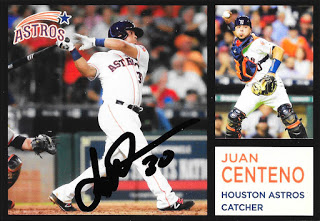 My first return came in from last year’s number three catcher, all-around lovable dude, and current Rangers backup Juan Centeno. He saw some spot time with Houston during 2017 while some guys were down for injuries, and promptly smashed a pair of game-winning dingers and displayed some excellent defense. I was a little sad to see that the Astros didn’t retain his services this year, but they seem committed to a full season of Max Stassi and Centeno wasn’t going to get any playing time. 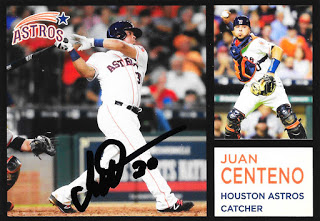 Juan signed both of the customs I sent, a design I whipped up that is based on the old 1962 Topps Football cards. That white block is a little more beige than it scans here. This return also made him my first return from Spring Training this year. I tend to write fewer and fewer guys each year as once reliable Spring Training success rates seem to have dipped abysmally low. It’s a great opportunity to try and catch guys who are still in the league and only saw some brief time with Houston, though. 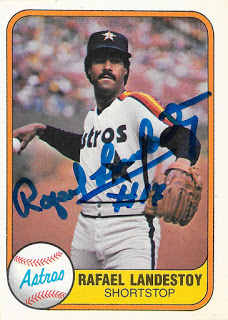 Coming in just a day later was my second Spring Training return, this time from new Mets staffer Rafael Landestoy. I’d had this ’81 Fleer (my 43rd signed card from this set!) set aside to send to him at some point this year, as he’d been signing through PastPros. When I was doing my annual roster skimming, though, I noticed that he was listed as the International Field Coordinator for New York, someone that I knew would be at Spring Training. So, I took a shot and it paid off, and I was able to knock out another Astro and a card from this great inaugural Fleer set. 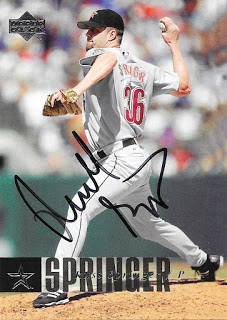 Russ Springer: 1/1, 210 days.
The same day that Rafael showed up in my mailbox, Russ Springer arrived as well! Alas, much to my chagrin I’d bought a signed copy of this same card at the hotel card show I went to in January. I guess I should have held out another couple months, but oh well. You can’t win them all. Now I only regret not sending him a second card. 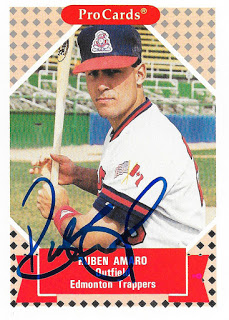 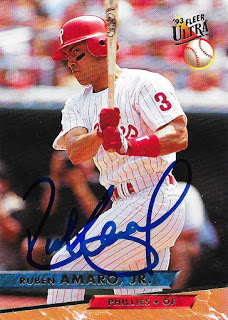 Ruben Amaro: 2/2, 11 days.
Speaking of Mets coaches, I landed yet another Spring Training return from one thanks to first base coach Ruben Amaro Jr. I knew when I pulled this ProCards minor league issue of him and his comically large hat that I had to write him. I may have missed the boat on getting his dad’s signature, but autographs from baseball families are always fun to me. I find it interesting that Amaro, having spent so much time in the front office, wanted to get back down to the field staff – and not as a manager, but as a coach. 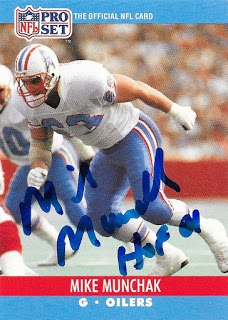 March saw a non-baseball return roll in from Mike Munchak, former Houston Oiler and Hall of Fame guard. Munchak is an offensive line coach with the Steelers, where I’d sent this just before the end of the season. 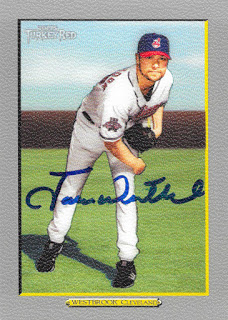 Jake Westbrook: 2/2, 534 days.
I must say, this one was a bit of a surprise. I’d sent these out to Jake about a year and a half ago, and had all but written them off, so I was quite pleased to see them emerge from the envelope! I am kinda working on the the 1999 / 2000 Just minor league sets – it’s a bit of a holdover from the giant road trip we went on in 1999 (that I swear I’ll write about someday) – so it’s very nice to be able to add one of these to the collection. The Turkey Red came out quite nice as well. I’d forgotten that Jake was a Yankees prospect at one point. 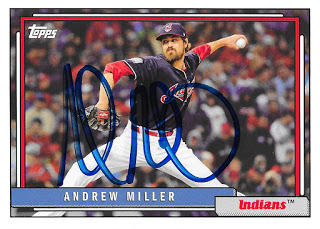 My March returns wrapped up the way they started, with another Spring Training return. I’d noticed that Andrew Miller had a pretty good response rate last year, and I really like the way the Indians have put him to use in a more traditional “fireman” role. Plus, he ticks off an award winner box for my list, having won the AL reliever of the year award in 2015.

That does it for March! As always, may your mailbox be full of goodies, whether they’re inked or not.