Alas, this past weekend our dear friend Matt at Bob Walk the Plank announced that he shall no longer be walking said plank – at least, not on his blog. There was much weeping and gnashing of teeth as the previous announced retirement of JBF dealt us a double blow, and both of them will be sorely missed. They’ve both been tremendously generous to me.

But there is happy news as well: it’s also Daniel at It’s Like Having My Own Card Shop’s 9th blog-iversary! That’s certainly something to celebrate, and he’s doing so in traditional blogosphere fashion – by holding a contest. God I love our little community. Daniel’s challenge was to post 9 cards – no theme, just 9 cards.. Given Matt’s announcement, I thought a fitting tribute to our ‘Bucco-loving Brother would be to highlight a portion of my collection that doesn’t get a lot of air time here at RTA: my Bill Mazeroski collection. So here they are, 9 Mazterpieces (sorry/not sorry) from my collection.

We’ll do this countdown style. 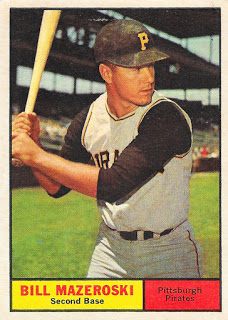 9. 1961 Topps #430
What drew me to Maz in the first place? The answer lies with my father. I’ve told this story in one form or another here on the blog several times, but the long and short of it is this: when I was a 12-15 year old kid dragging my dad around from card show to card show, I got him back into collecting. I suppose that after he realized it was going to be a long-term interest of mine, he decided he needed a project for those Saturday afternoons while I was rifling through card boxes.
My dad is from Pittsburgh, and actually went to two games of the 1960 World Series. My grandmother pulled him out of 6th grade, but unfortunately he went to games 2 and 6 – both blowout losses for the ‘Buccos. When dad left for college, his cards were pitched – that’s a story for another post – and so his reintroduction to the collecting world was to assemble the 1961 Topps Pirates cards, in order to recreate the team that he watched win the World Series (and a ’61 Post for Vinegar Bend Mizell, who didn’t have a card in the ’61 Topps set). After that, he started working on Clemente, his favorite player. I wanted a vintage guy to collect as well, and naturally that meant a Pirate. Since I’d heard about the heroic home run and Maz’s lightning-fast hands, he became my choice. I started slowly accumulating his cards. So slot number 9 goes to that ’61 Topps, which I would have bought at a show with my dad. 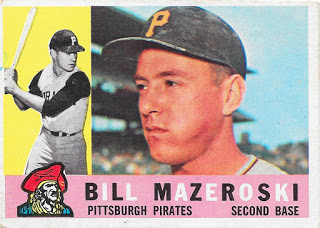 8. 1960 Topps #55
Slot 8 goes to the 1960 Topps – a truly classic Maz card, with his fat wad of chaw in his cheek, and an iconic design. I think this is actually one of the later cards I picked up for my collection, and I don’t believe that I found one until after I’d returned to collecting some five or so years ago. 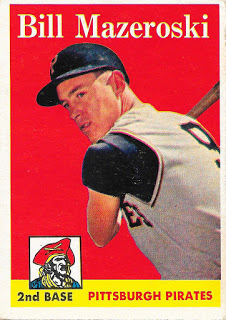 7. 1958 Topps #238
One of the byproducts of starting my Mazeroski collection at such a young age was the advice from my dad to not try and chase them all at once. That meant holding out for copies in fairly nice condition at reasonably low prices – a fact that is evident when I flip back through the vintage cards I have. I don’t think I ever picked up more than two at a show, and I can recall several times when cards were returned to the boxes in hopes of finding something better or lower priced eventually.
I’m not sure when in particular I picked up this ’58 Topps – a particularly lovely second-year card of the young second sacker, but I know it would have been one of those holdout purchases. I’m sure it didn’t hurt that I was a young kid in Houston buying Maz cards – the dealers were often quite kind to me, as I recall, and were usually willing to cut the little guy a deal.
I also happened to start collecting Maz at a particularly good time. This would have been in the late 90’s, a few years before he was inducted into the Hall, and that meant that his cards commanded less of a premium than they do now. 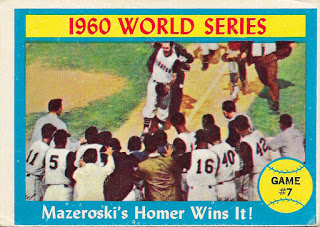 6. 1961 Topps #312
Unlike most of the cards in this post, this is a bit rougher – it has some soft corners and some particularly atrocious centering, if you’re the kind of person who cares about that. However, it’s devoid of any large creases. This is one of the most recent additions to my Maz collection, a card show pickup from around a year or two ago, and had been one of the big holes among his Topps cards. Because of its subject matter, this card often commands a premium, so I was pretty happy to walk away with a fairly good copy, centering aside, for something around five bucks. I mean, how could any person not love this card of Maz about to be mobbed following his epic swat? I suppose you could be a Yankees fan, but are they even really people? Just kidding. 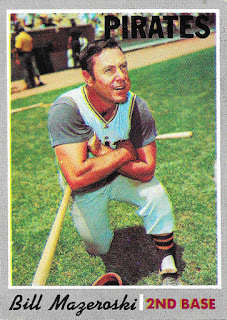 5. 1970 Topps #440
Checking in at number five is one of my all-time favorite Mazeroski cards, featuring the star late in his career. It is simple greatness: the cutoff sleeves, the kneeling pre-game pose, not looking at the camera, and that wonderfully underrated 1970 design.
Can we talk about the ’70 design? I flat-out love it. Has anyone done a set blog on it? I have too many sets in progress right now to make this the next one I chase, but I still really, really want to do it next. Maybe I’ll throw the other builds to the wind and just try and pick up a nice starter chunk at the next show. 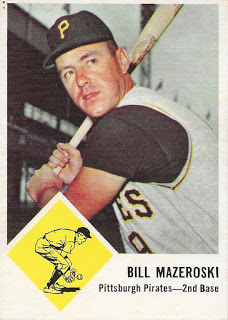 Slot four goes to an “oddball” Maz! Well, kind of – it’s 1963 Fleer, which some might consider to be an oddball set. I think it’s probably a full standard issue set, but it’s not Topps, and that’s a serious diversion for this post. This piece of vintage goodness actually came into my collection rather early – I remember having it long before I picked up its Topps counterpart from that year. It’s also a much nicer card than the ’63 Topps. The ’63 Fleer is an incredible design, and the yellow diamond with the black text and ballplayer icon go hand-in-hand with the Pirates colors. It’s just a beautiful photograph; whomever was shooting for Fleer was good. 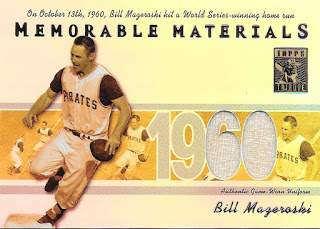 I don’t have many Maz relics, but I figured one of them should make the list. This one is my favorite, for obvious reasons. Wait – is that Topps re-using the same font for the name that’s on the 1970 design? Oh hell yes it is! It’s also Topps re-using the same photo FOUR TIMES on the front of the same card. I don’t have a scan of the back, so I can’t be sure if it’s used there as well. At any rate, this one flat out shines in hand, and the old uniform cuts always amaze me. Out of all the modern cards I’ve come into that use some photo from this moment, this one is by and large my favorite. My dad gave me this card as a birthday or Christmas present once upon a time.

2. 1993 Upper Deck All-Time Heroes #92 – Autographed
I have a few Mazeroski autographs – all of them have also come into my collection thanks to my father. There’s a 1990 Pacific, that looks fantastic. There’s a certified 2001 Fleer Greats of the Game, easily one of the best sets of its kind, and with an autograph checklist that really set the standard. There’s a beautiful black and white 8×10 of Maz hitting the game-winning homer – that shot where he’s in the lower left corner and the ball is sailing out over Yogi Berra’s head in left field, with a gorgeous big and bold blue signature. My favorite Maz auto, however, is this one. The 1993 UD All-Time Heroes set is a throwback to the T202 Hassan Triple Folders design. It’s a wonderfully done set, and one that I’d perhaps like to chase down in the future. While everyone remembers Maz or knows about him for the heroic homer, the true skill of his game was his incredibly fast hands and his excellent defense. He holds the record for most double plays by a second baseman, and along with Pirates shortstop Dick Groat set the record for most double plays by a duo, so a card highlighting him turning a two-fer at the keystone is only fitting.

1. 1957 Topps #24
Finally, card number one: the Holy Grail and the centerpiece of my Mazeroski collection is this 1957 Topps – his rookie card. Look at that little guy, so full of promise and untapped potential! Look at those skinny little arms, and then scroll back up to the guns on his ’70 Topps. This card may be the reason I fell in love with the ’57 set in the first place, a set that I will eventually put together before I die. It may take until that long, but by I’ll do it. I have no recollection of how long I searched tables before coming into this copy at a card show, but I know it took some patience. Aside from a little centering issue, it’s also in phenomenal shape.
So there you have it: 9 of my favorite Maz-ter-pieces. Thanks for the contest challenge, Daniel! It felt really good to pull these out and write about them. I think I’ll have to do some follow-up posts soon to cover some of the other parts of the collection.