The Astros are on, going for a franchise record 13th straight win, and I’ve got some time, so let’s continue to make good on all these old trades and whip another post into shape, shall we? These cards came in from fellow TCDB member Robert, aka bkim. I’d swapped him a few Phillies and a some cards for some set builds: a handful of ’73 Topps and a couple dozen ’88 Donruss. In return I nabbed a nice little package of ‘Stros, including some extras Robert threw in the mix. 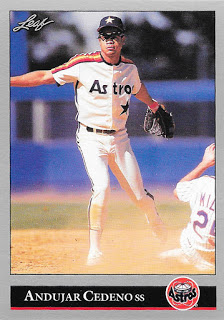 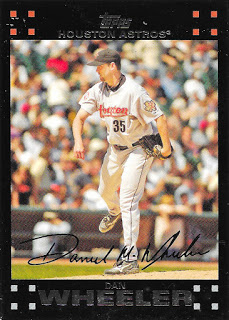 First up, some commons. I’m pretty sure that 1992 Leaf Andujar Cedeño finished off the team set for me, or brought me within a card of it. I can’t imagine another reason I’d scan it. As for the Wheeler – waittaminute, I’ve had the ’07 Topps Astros finished for a while now. Could this be one of the extras? 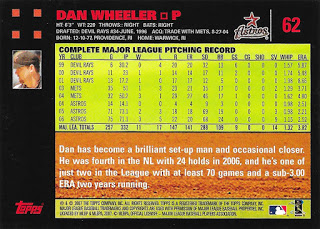 Nope! It was one of those coveted(?) “red back” parallels; red back meaning that the player name, position, and card number text are in red instead of white. I’ve got a few of these now, but I think Wheeler was my first from the base set. 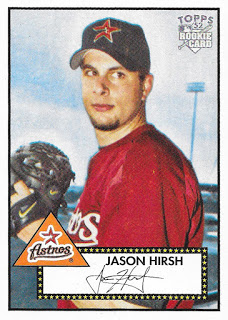 Ah, some faux Vintage cards showed up in this package. That 2006 Topps ’52 Edition really threw me for a loop when I first came across it. I much prefer this 2005 Heritage and its nod to the ’56 set. But wait, I have that Ensberg already as well… 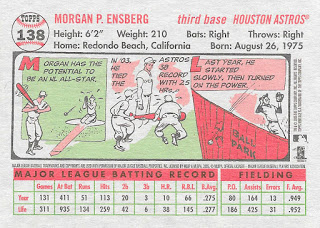 Sike! It’s the hard to find white back parallel. You’ll know these when you come across them because the cardstock was bleached instead of the traditional brown. I really loved watching Ensberg play here in Houston. He was a beast at the hot corner, and had some nice power in his bat. 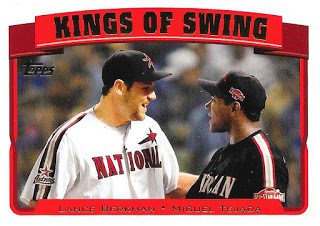 Let’s stick with the horizontal theme. Here’s one of the extras Robert found for me – a Berkman / Tejada card from 2005, just a couple years before they would become teammates. I don’t even have to check the year of this card, I know it because the All-Star Game was here in 2004 and those are most certainly the Houston ASG patches on Tejada’s jersey and cap. 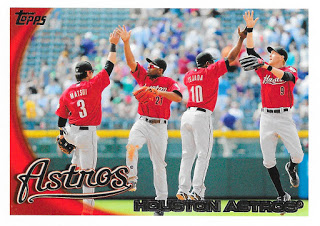 Oh look, it’s Tejada in Houston again (#10), but this time he’s in our uniform! You can also spot Hunter Pence on the far right, Kaz Matsui on the far left, and Michael Bourn. I do believe both of these cards finished off my flagship team sets from 2005 and 2010, respectively. This one was also an extra throw-in. 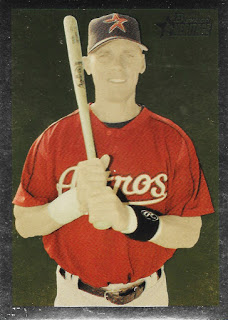 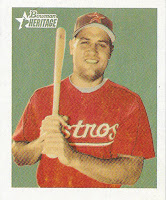 Next in the faux vintage department, we have a pair of parallels from 2006 Bowman Heritage. That’s a “Chrome” Craig Biggio on the left and a mini parallel of Berkman on the right. It’s, uh, well a little larger comparatively than depicted here. 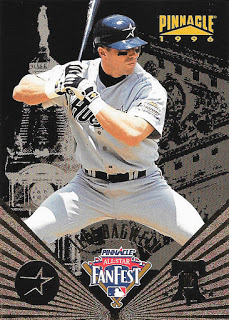 We saw some guys at the All-Star Game in Houston earlier, but one of my favorite cards from this trade was this Jeff Bagwell from the 1996 Pinnacle FanFest set, when Bagwell played in Philadelphia. It’s astounding to me how many Bagwell cards are out there that I’ve never seen before. 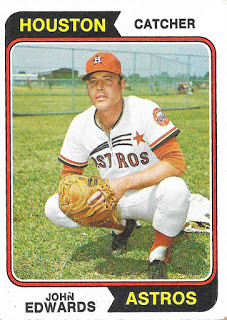 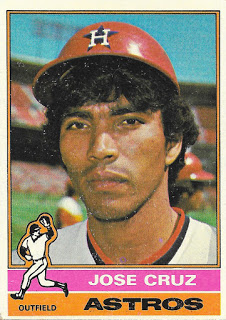 Finally, we’ll close this trade package out with two glorious pieces of ’70s vintage. First, another throw-in: Robert astutely noticed that I had listed another ’74 Johnny Edwards on my want list. I had one in the set but not one in the team binder. In fact, I think I got this one signed shortly afterward and picked up yet another copy of the card in a trade a few months later. Last, but certainly not least in this trade was the 1976 José Cruz – the final card I needed for the 1976 Astros set.
Thanks again for the trade Robert! Let’s do it again soon.

0 Replies to “Phurther Catchup: Trading With a Phillies Phan”