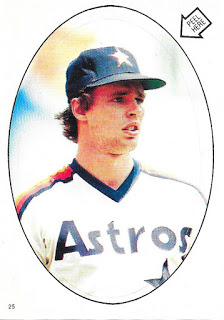 I was on a good little posting run there, but I dropped it. Time to get some content up!

Here’s a quick TCDB trade for some stickers, courtesy of my new pal Soup3102, whom you would call Scott if you met him in the flesh, or anywhere that wasn’t TCDB, most likely. Four year-old me would have been so excited to put new stickers in his album. I had everything – Care Bears, Thomas the Tank, Garfield, monsters, Easter Seals, Greenpeace, all sorts of craziness in this giant construction paper “album.” Thirty-four year-old me is still excited, but more for the simple fact that these are Astros stickers.

First up: a Bill Doran from the 1986 Topps Stickers set. Bill must have been a big deal, because he got a coveted solo sticker. 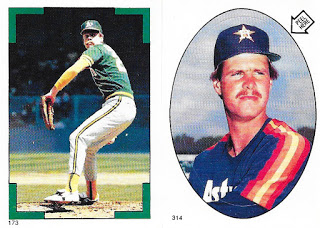 Glenn Davis, being an untested rookie, did not get the same sort of treatment. Davis is the high number in the Astros team set, clocking in at 314. 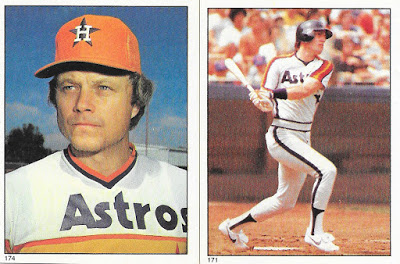 Diving back to the 1981 Topps Sticker set here. Joe Niekro and Terry Puhl, two mainstays of the organization for a while. Puhl is actually pretty high in the franchise record books in many stats, given his lengthy tenure here. 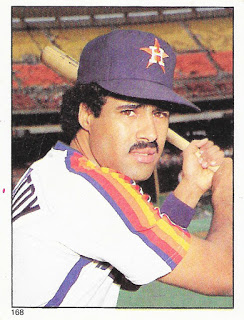 But seriously – what the heck is going on with Landestoy here? Let’s take a gander at this not-quite-cardboard glory. It appears that he is holding one of those toy bats you’d get at the stadium. He looks like someone has threatened his family, and also like he’s never actually played baseball in his life, and that the prospect of his failure spells doom for said family. Who did this to him?

In return for this bounty I sent a stack of 2018 stickers to Scott to help out with his set build. I wonder if he’s putting them in the album.