by MarcPosted onSeptember 30, 2018July 9, 2019
I got off my nice posting rhythm once again, but that’s primarily because I have been working on my season-long custom set. Here’s a Twitter thread where you can see what I’ve done thus far, if you’re so inclined. I’m about a third of the way done with the season, though you won’t see them all there yet as I’m posting the fronts of the game highlights cards as I complete each series in order. I’ll post more about them here in depth as I get some time – it might have to wait until playoffs are over.
Anyway, almost two weeks ago I posted about being able to sneak off to the card shop for the first time in several months and the many, many dime box finds I brought home. Then, when looking through my back catalog of scanned stuff yet to be posted, I noticed another LCS trip sitting there, sadly neglected, tucked away to be shared at a later date. So let’s take a look at the other LCS run I made this year, back in April. This was from late in the month, but I’m certain I counted it as a little birthday reward to myself just a couple weeks late. 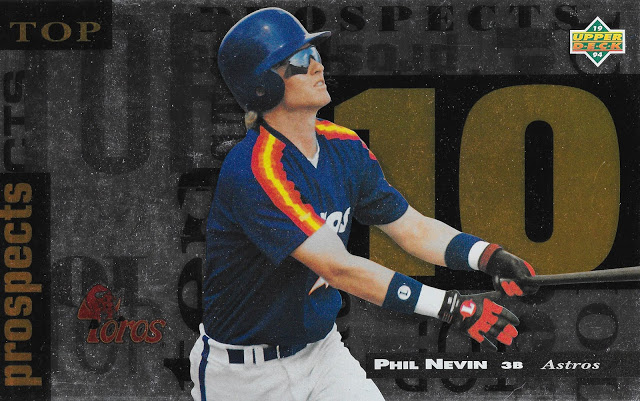 Among the things in this trip, I remember taking a moment to rifle through a stack of oversized items that I’d seen at the shop before. This box topper (I think) from 1994 Upper Deck Minors cost me a buck, I think. It’s 4″ x 8″ maybe? I’d have to dig it out to check. 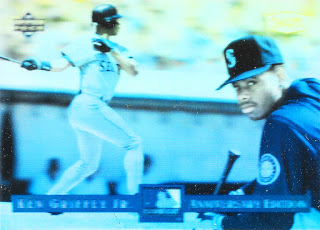 I think I’ve mentioned the Denny’s hologram sets several times this year on the blog. These were nice little finds. 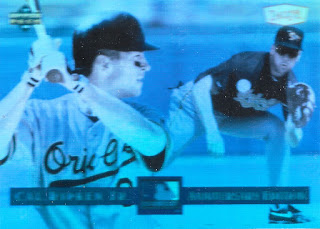 I would’ve picked up the Cal for my PC if I wasn’t already working (slowly) on the Denny’s sets. These are from the 1994 edition, as evidenced by the 125th Anniversary logo. 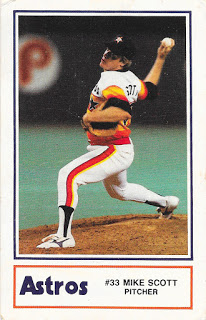 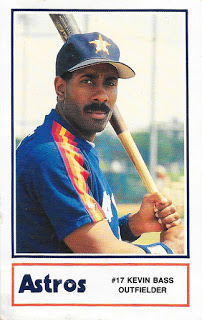 This dig was mostly Astros, though, and I found a nice little group of Police cards, which is always enjoyable. They aren’t always in the greatest shape due to their thinner stock and oversize nature, but I’ll happily pick these up whenever I see them. 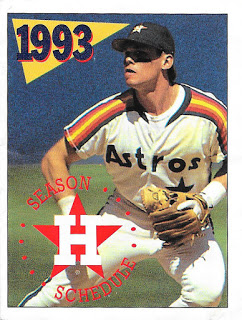 Somewhere in the box I found a 1993 pocket schedule, featuring one Craig Biggio. 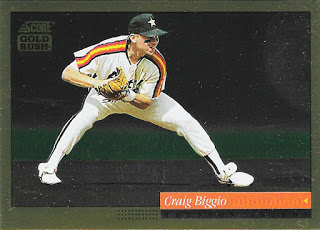 I found another Biggio I needed in a stack of Gold Rush parallels from 1994 Score. I remember grabbing several of these to send off in trades as well. 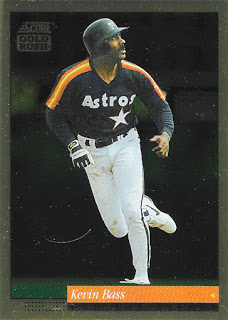 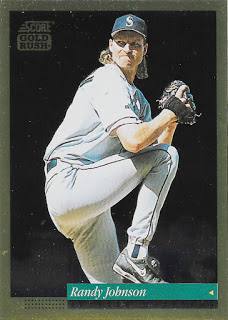 A couple other Gold Rush keepers. The Big Unit was just too good to pass up. As always, these look better in person than in the scans. 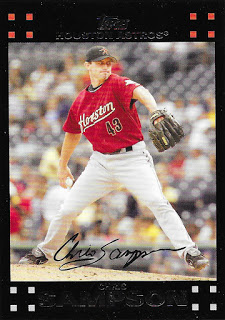 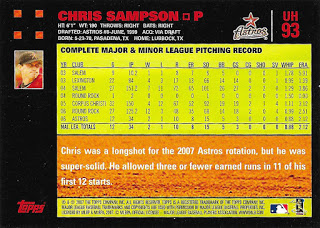 I was about to skip the 2007 Topps section altogether when I had a thought to flip them over and see if I ran across any of these “red backs” – meaning the player name/position/card number are all in red text. The Chris Sampson was the only one I needed, but these are always a welcome pickup. 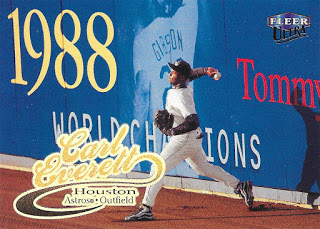 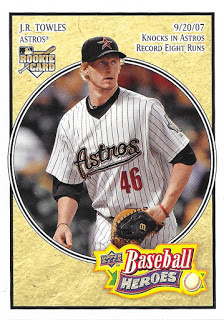 I know that Night Owl has featured this Carl Everett card before, because I remember a post about it being a “Dodgers Card” thanks to the outfield wall there. The J.R. Towles comes from the 2008 Upper Deck Baseball Heroes set, and highlights his 8 RBI game in September of ’07, setting the club record. Yuli Gurriel just had a 7 RBI game last week after a grand slam, a two-run shot, and an RBI single. I was hoping he might at least tie Towles, if not set the record, but he came up short. 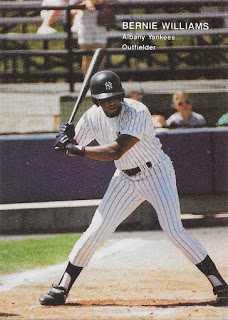 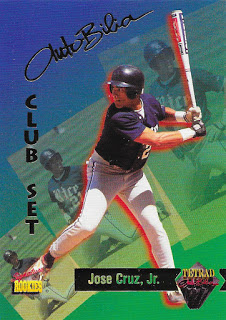 I said earlier that this haul was mostly Astros, and it was, but there were a few other pickups strewn throughout it. Here’s a pair of minor league cards – a 1990 Best of Bernie Williams and a 1997 Signature Rookies Autobilia of local product Jose Cruz Jr. I love that he’s shown in his collegiate uniform, where he was a star with Rice. 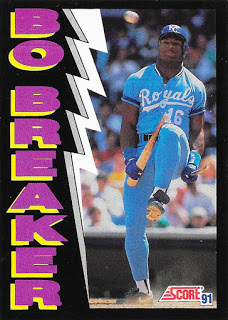 Bo knows that everyone needs a copy of this card in their collection. 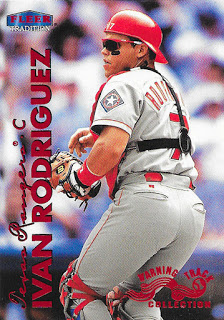 I found a nice stack of the Warning Track parallels from 1999 Fleer Tradition – a set I rather enjoy and have since it first came out when I was in high school. The find provided plenty of fodder to pick up some PC additions, traders, and a couple others – like this A.J. Hinch. 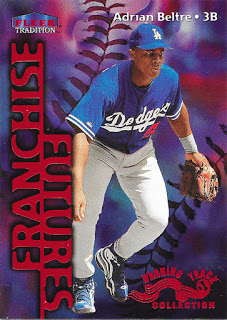 Adrian Beltre is going to get into the Hall of Fame someday. It’s fun to find cards of young Adrian with the Dodgers, even more so to stumble across a pair of parallels. 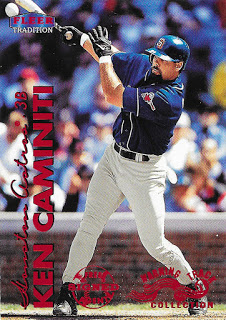 Of course, I stumbled across a few Astros as well, which is always helpful for the collection. ’90s parallels are not always easy to track down, even the ones that were inserted one per pack such as these, or the Gold Medallions from Ultra, or the Silver Signatures for Collector’s Choice. 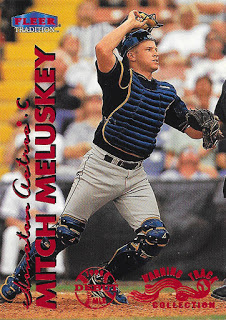 Mitch looked like a young stud catcher at this time, and there was plenty of promise, but he never quite panned out. But 1999 was peak Lima Time, with Jose leading the league in wins as he and Mike Hampton gave Houston a pair of 20 game winners for the first time in quite a while. 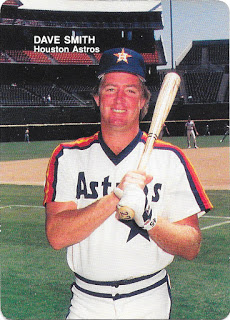 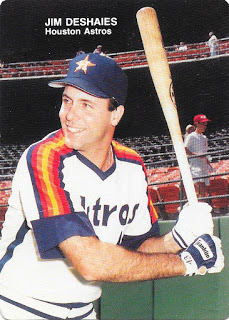 I also ran across a nice little stack of Mother’s Cookies cards, and promptly grabbed the entire stack without checking for dupes or considering what I might have already owned. Mother’s Cookies aren’t exactly easy finds, so I wasn’t concerned about that; I can always re-home the extras. This pair falls into one of my favorite MC tropes, the “pitcher with bat” photo. I’m not certain why MC sets are rife with these. Perhaps it’s a case of the pitchers wanting to do batting poses, perhaps it’s due to a photographer unfamiliar with the roster and pitchers more than willing to go along, or even duping him. At any rate, there are plenty of MC cards featuring pitchers with bats. 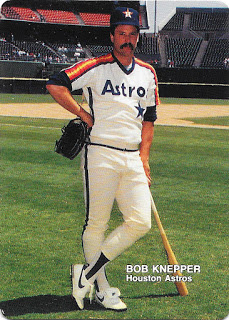 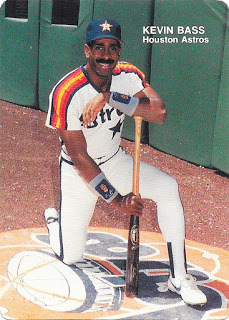 See Exhibit C, Bob Knepper. ‘Nuff said. More bat poses here, including a fun one of Kevin Bass posing on the on-deck circle whilst wearing giant wristbands with his face on them. I’ll have to go back and scan a close-up of those, but you’ll just have to take my word for it. 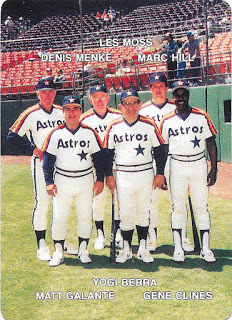 I’ll close with one more pair of Mother’s Cookies cards. These two feature Hall of Famers – a Nolan Ryan is always a nice pickup, as his cards command a premium. But who’s that nestled into the center of the coaches card? Why it’s Lawrence Peter Berra! I did scoop up doubles of this one, which is notable because in addition to Berra’s appearance, this is one of only two Astros cards to feature Gene Clines and Marc Hill. They were only on the major league staff for one season, making this a 1987 card. They both show up on a coaches card in that year’s Houston Police set as well. I’ve gotten Clines already, but I’ll be using one of these to snag a Marc Hill autograph for the Astro-graphs project.
Wow, September’s gone already! I need to continue plugging away at the blog. There’s more to come, as always.

0 Replies to “A Belated Birthday Dig”