by MarcPosted onOctober 16, 2018July 8, 2019
I, uh, haven’t been posting. Which is a bit of a shame, as I was on a pretty good roll for a while. I’d put off a few posts as I was playing some catch-up on my 2018 season customs. Then work had me fairly busy, and finally we had some just flat-out awful family circumstances occur. The long and short of it is that my wife’s grandfather passed away unexpectedly on Thursday morning, so most of the ensuing days were spent spending time with her family. He was 82, and his heart just gave out. Fortunately, he didn’t suffer, but it came as quite a shock to us all. He was a man of incredible kindness, the patriarch of their sizable family, and he never met a stranger. We laid him to rest this morning. My wife is the oldest of the grandkids, and her grandparents were essentially a second set of parents for her – she grew up across the street from them, spending large amounts of time with them, so it’s been a bit rough for her. 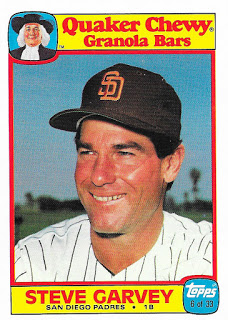 After a week of juggling work, family matters, ferrying our daughter to and fro, and finally getting back to our house, it was nice to just turn on the game today (sigh) and play around with a few cards. These came in recently from Jim, whom you probably know as gcrl, but I hadn’t gotten around to scanning them until tonight. He’d sent this quick PWE my direction after I inquired about a card on his blog, and I lobbed some Dodgers his way (they don’t quite all go to Night Owl) in return.
First up, the unexpected surprises. I’ve mentioned my love of food issue cards here frequently, and noted that there are several sets I’m slowly piecing together. I’d recently added want lists for a few of these, including the 1984 Ralston Purina and 1986 Quaker Chewy Granola sets.
Well, when you’re a Garvey supercollector, I suppose you wind up with some dupes – even of the non-Dodger variety. This Padre Quaker brings me up to 8 from the set. 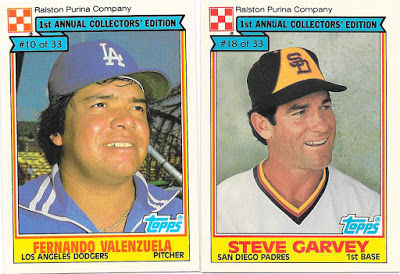 Jim found a pair of Purina cards for me as well – including another Garvey and some Fernando-mania. I believe I’m up to 13 of these now. 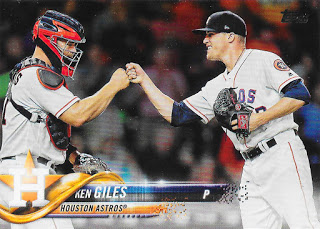 Finally, here’s the card that started off the swap. “Does anybody really need this Ken Giles rainbow foil card?” Jim had asked in a recent post. Oh, why yes – I certainly do! #Kenneth adjusted nicely to his new home up north after the (sigh) Osuna trade. I still like the guy, and I hope that he does have things figured out now.

Alright, that’s all for tonight. Fingers crossed that Houston can grab games 4 & 5 at home before closing the series out in Boston. Tonight was a mess.

0 Replies to “Cards as I Receive Them”