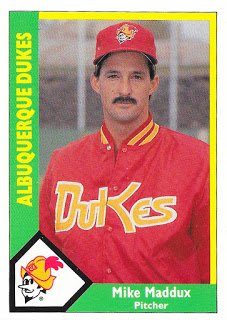 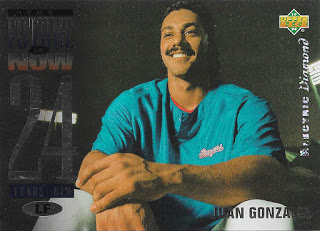 But I simply moustache you a question. 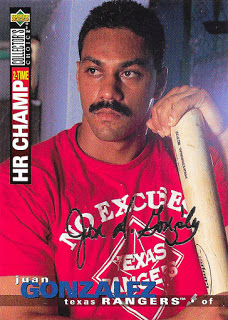 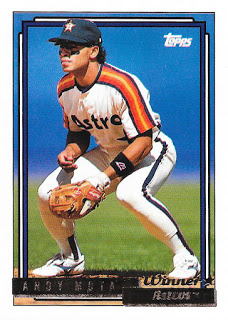 Did you know that I’m a winner? And you can be a winner too?
Ok, apologies for the silliness. What was I supposed to do with this little handful of cards that I got in a recent TCDB trade, just post them like usual? I only wish Andy Mota was sporting a ‘stache in that last card, it would have really sealed the deal.
Anyhow, these came from the other Marc, aka SaveDaKid. It was our second swap this year – you can read about our June trade which I finally posted about two weeks ago here. I believe I found the 1992 Topps Gold Winners Andy Mota due to the site’s Recent Matches feature. I perused some of Marc’s trade list and found the Juan Gone cards and that minor league issue of the lesser Maddux and requested those as well. The Gonzalez cards are parallels which I’ll drop into the PC, while the Maddux is going to be sent in an autograph request.
Mike wrapped up his career with a very short stint in Houston in 2000, albeit not quite as short as Doc Gooden’s one-game appearance that year. Maddux made it into 21 games, pitching 27 1/3 innings and going 2-2 with a 6.26 ERA before being released on July 5th of that season. Following his release, he became a pitching coach for the Round Rock Express, then the Astros AA club. After a few years there, he moved on to major league coaching staffs, first with the Brewers, then the Rangers and the Nationals, and spent this season with the Cardinals. Who knows if he’ll return with Matheny being dismissed this season. At any rate, I need to whip up a card of him in an Astros uniform for an autograph request.

Thanks for another swap, Marc!

And if you’d like to be a winner as well, let’s trade! Perhaps you’re working on some junk wax sets that I can boost – or maybe you’d like to start on one? Perhaps you’re still filling holes from more recent sets, say 2013 onward? Maybe you’re even working on something from this year – Archives, Allen & Ginter, Heritage, or something else? Hit me up. I’ve got cards to move, and I don’t need similar quantities in return.