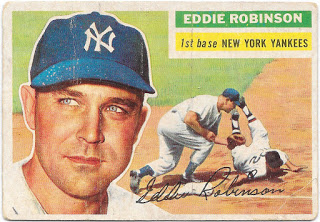 I’d venture to say that most of us in the hobby entered it due to at least some influence from our father, whether that was from a first pack of cards that was given to us once upon a time, or simply the handing down of a love of the game.

Which leads to a question I imagine we’ve all asked our father’s at some point: did you have any baseball cards when you were a kid? I know I certainly asked it of my dad, quickly followed by things like, “what where they? Did you have anything cool (i.e. valuable)? What happened to them?”

The trope of moms throwing out not-so-vintage-then baseball cards after someone had moved away – whether for work or school or whatnot – is such a fundamental truth of this hobby, that you might say it’s one of the core principles of this hobby. The notion that these pieces of cardboard might someday be worth anything of sentimental value, let alone monetary, well it just wasn’t a thought in the minds of the general populace, certainly not most mothers who didn’t have room for that clutter. It’s the reason (along with other general causes of scarcity among old cards) that those mid-century cards are so prized: they represent something that old collector’s might have had once, something younger collectors – particularly my generation who got our first cards in the 80’s and hung around for the junk wax boom and 90’s explosion – never had a chance at, and its a driving force for the reason many of us collect today. Older collectors are regaining a piece of childhood, those in my generation are probably kids that swore, “mom will never throw out my cards.” It may even be the reason we chase older cards.

Hell, this facet of the hobby is such an overarching theme that Topps has not only used it as an insert concept, but the card industry as a whole has made an entire industry of reprints, design callbacks, and former players in sets. It’s even true enough that our fellow blogger Jared picked the moniker Cards My Mom Didn’t Throw Out as his masthead.

Sure, I’m waxing poetic. And while I’m not entirely certain how the first few cards in my collection floated my way, I do know that my dad at least fostered my early love of this hobby. 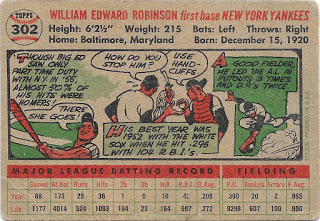 And yes, my dad’s cards were once thrown out as well. The 1956 William Edward “Eddie” Robinson card that graces the top of this post is one of two surviving cards from his boyhood collection. We found the pair of them in the back of a desk drawer in his childhood bedroom on one August visit to my grandparents’ house in Pittsburgh, and he gave them both to me a little while later.

Here’s the back. Aside from some soft corners and a noticeable crease that runs through Eddie’s portrait, the card is in decent shape. For the longest time, these two cards were the oldest in my collection.

Dad grew up as a Pirates fan, of course, idolizing Roberto Clemente and attending games at Forbes Field as a youngster. He even had the good fortune to attend two games of the 1960 World Series – although his fortune wasn’t all that great as he suffered through Yankee blowouts in Games 2 and 6. But getting to go to a pair of World Series games with his mom sure beat sitting in his sixth grade classroom. He still has the ticket stubs, too. I believe we came across them on this same trip. It always struck me as a bit odd that one of the only cards to survive from his collection was a Yankee, and I think for a long time that made me under-appreciate this piece of cardboard.

You see, Dad’s cards were thrown out when he left for college. Or rather, they were thrown out just before he left for college. His mother said there wasn’t room for them if he wasn’t going to take them to school – a preposterous thought when you consider that he probably didn’t have more than a shoebox worth – and so one evening the three of them sat in front of the fire and pitched them into the blaze, one by one.

When my dad first told me this story, my adolescent brain nearly collapsed into itself. What was in there? What were we missing? Oh sure, they probably weren’t all in good shape – Dad was a flipper at one point – but still!

Yes, there were Mantles. Who knows which ones, but Dad does remember having a couple at some point.

It all just makes the other surviving card that more remarkable – and I’d wager to say that this is one of the more iconic cards of the era, although no, it is not that ’56 Clemente. I still don’t know if Dad ever had one as a kid, but I do know there’s one in his collection now. 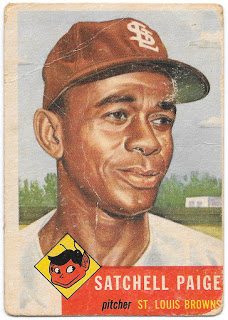 Yes, this well-loved ’53 Leroy Robert “Satchel” Paige was the other card we found in the desk drawer that day. I couldn’t tell you how many times I checked its value in Beckett or Tuff Stuff when I was a kid, laying on my bedroom floor and playing around with my cardboard heroes. It’s always been stunning to me that this card, this insanely gorgeous card of one of the all-time greats, is the other one that somehow missed its baptism by fire. Sure, it’s got some heavy creases, light ink loss, terrible centering, and dogged corners, but this is still the most beautiful card. Look at Satch’s kind brown eyes, that wonderful smile, and then realize that he was already forty-five by the time this card came around.

Here’s that outstanding card back for you, as well. My favorite tidbit about this card is something I just noticed when I pulled it out to scan it last night. It’s very hard to make out in this scan, but Satchel’s height is listed at 6′ 3 ½” tall. Yes, there’s a half inch listed there!
I can’t tell you how many times I’ve shaken my head in disbelief at the fact that I own this card, or how it came into my possession. It is the crown jewel of my collection, and no matter what I collect or come across, it always will be. No offense Eddie – you were a fine player in your own right, but you weren’t The Man.
I’m not going to try and get all flowery or gush about this card anymore – as I said already, it’s an iconic card and I think that it speaks for itself. I’ve been meaning to write about it for nearly five years now, since I first started this little blog, and I’ve always wanted to make it a bit of a special post.
Well, today is Dad’s birthday, so what better time to write about it? He’s 69 this year, and is still collecting, with probably one of the deepest Clemente collections you’re likely to run into. When I was dragging him around to card shows in the late 90’s, the first project he undertook was building the 1961 Pirates team set. I remember him being very selective, too, as he picked up a couple here, a couple there, and being thorough enough to track down the 1961 Post card of Wilmer “Vinegar Bend” Mizell to round out the roster, as Topps left him out of their ’61 set. Then it was the Clemente run – Dad was just in time for the 1998 reprints that Topps made.
So Dad, thank you for gifting me this sport, this hobby, and this card, but most of all, yourself. As a father myself now, I appreciate it more than ever.
Happy Birthday, Dad.