Let’s cap off the Brubaker’s Dozen with my most epic eBay pickup of the year, a true White Whale which I didn’t really think I’d land for quite some time.

To be fair, I’d been hunting this one for at least two years, ever since I found out about its existence.

Without further ado, please say hello to what is now the oldest card in my collection: 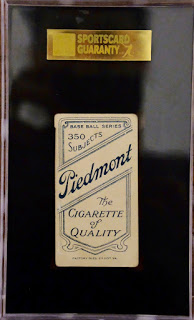 Oooh, it’s a lovely Piedmont back! These are some of the finest, in my opinion. The Piedmont layout is super-stylish. Now let’s take a closer look.
Enhance!
*enhances* 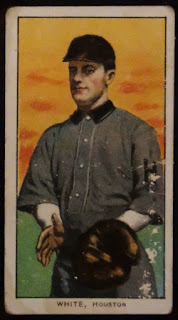 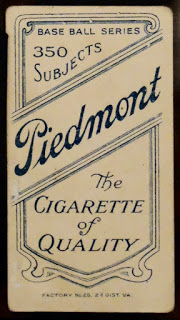 Holy crap, how in the hell did this get graded a 10/Poor? Sure, there are a couple small creases on  the sides around the middle of the card, and yes there’s a small bit of paper loss along the right side on the front. If you peer astutely at the back, you’ll notice that just below the P in Piedmont and just southwest of the Q in Quality there are some very small pieces of extra paper stuck on the card. But this grading is really just baffling to me.

At any rate, I picked this up for an absolute song, as far as these things go. Cards in the PSA 5-to-7 range typically go for well over a hundred dollars, and up in the $300-$400 range for the very top end examples I’ve seen. But I snagged this lowly 10, which is certainly in fantastic shape for such a card, for just $35. Patience paid off, as I watched auction after auction and listing after listing go by. I’d probably bid on half a dozen of these, figuring I’d eventually pick up a low-grade copy for under $50. I didn’t imagine that my low-grade copy would turn out anywhere near this nice, either.

I’d been watching this ever since I got a wild hare and decided to check and see if there were any actual Houston Buffaloes cards out there. For a very long time, I thought this was indeed the only Buffalo card. While some of the minor league teams featured in the T206 set get multiple entries, Foley is the lone Houston representative. It wasn’t until I learned about the T210 Old Mill cards from the same era that I discovered there are another ten or so Buffs out there, but that set appears to be much rarer than the T206 cards, at least from what I can tell.

There is a small bit of intrigue surrounding this card, as Foley White never officially played for Houston. However, the sleuths in this Net54 thread have come to the conclusion that White was with Houston during Spring Training, when these images would have been selected, then opened the 1909 season with Waco.

Statistics for these old minor leagues are far from comprehensive, so its difficult to say how good of a player White actually was. My favorite thing about him might be the names of the teams he played for: the Millionaires, Orphans, Miners, Boll Weevils, Sand Crabs, Sea Gulls, Navigators, Brownies, Railroaders, Blues, and Drummers all make appearances.

So yes, this is my most fun, most exciting eBay pickup of the year, for certain.

0 Replies to “Brubaker’s Dozen Finds of Ebay: #1 A White Whale”